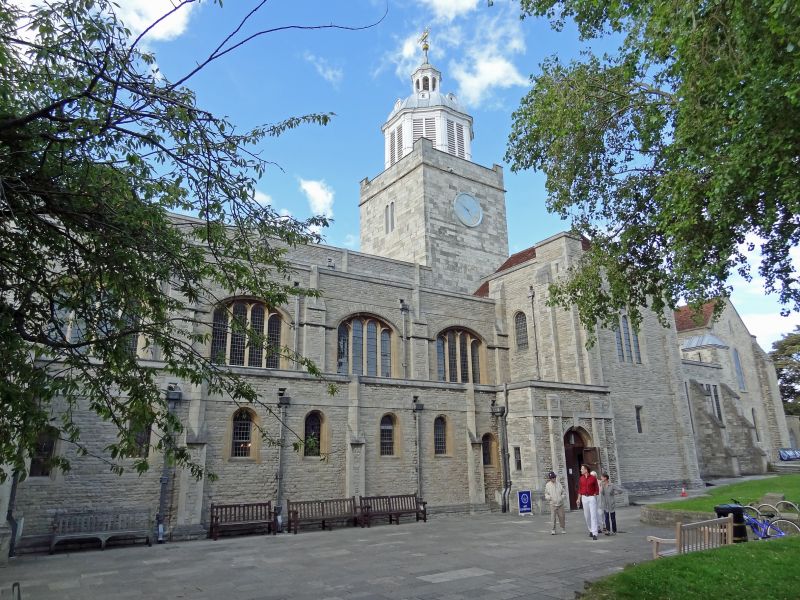 C18, and early C19 wall memorials which have coats of arms,
cherubs, urns, and skulls; of particular note are those in
tower: i) to Sir Charles Blount, d.1600; having tablet in
classical architrave with trophies of war below and armoured
male figure kneeling at altar above: ii) in choir south aisle,
to George Villiers, Duke of Buckingham, assassinated in
Portsmouth 1628, possibly by Nicholas Stone and having tablet
flanked by trumpeter and figure holding laurel wreath, eagle
on urn in classical architrave with side-panels depicting
trophies of war, and coat of arms and trumpeting cherubs above
all. Various C18 floor tablets, and other memorials.
FITTINGS: amongst the woodwork of particular note is the 1693
hexagonal, highly-decorated, panelled pulpit on slender column
having turned balusters to stairs up, and 2 fluted columns
with Composite capitals supporting sounding board which is a
1904 replica of the original and has egg-and-dart cornice,
collared soffit carved with flowers and ogee cap supporting
trumpeting angel; late C17 reused panelling in nave piers, and
corporation pew with royal coat of arms of 1695 over mayor's
seat; panelled bowed gallery, 1706, extended 1750; restored
organ case, the original of 1718 by Abraham Jordan Junior,
which has a central figure of David and cherubs, possibly by
Francis Bird. Paintwork includes a mid-C13 wall painting of
Christ seated in judgment, set in vessica in north transept.
Other features of interest include: 4 old banners in north
aisle, and in south aisle fragments of Lord Nelson's HMS
Victory Ensign Flag; octagonal early C16 font having octagonal
column and shields carved on sides; in north aisle of C20 nave
extension, original weather vane, a golden barque with pennant
dated 1710; imported Della Robbia majolica of Madonna and
child; C19 and C20 glass.
(The Buildings of England: Pevsner N & Lloyd DW: Hampshire and
the Isle of Wight: Harmondsworth: 1967-: 393-407; English Life
Publications Ltd.: Rev Knowles G: Portsmouth Cathedral: Derby:
1985-).