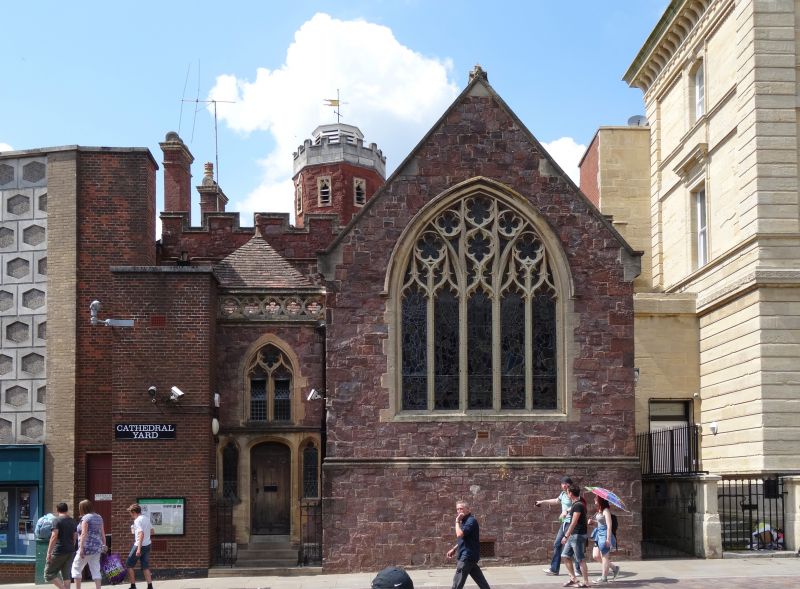 GV
II*
Medieval fabric mostly dating from the 15th and 16th centuries. 1881 restored, chancel added and orientation changed by John Hayward. South parts partitioned off and refitted in the late 20th century by Caröe and Partners

PLAN: nave, chancel, north west tower, two outer south aisles and, from when the orientation was changed, a south-facing late Victorian chancel (which re-orientated the church). This Victorian orientation was reversed in the late 20th century.

EXTERIOR: The north wall fronting the High Street has a lofty wall with a three bay nave and west tower. The lower part of the nave has a north west entrance under an ogee hood. East of this are two blind semi-circular arches. The clerestory has three, three bay clerestory windows with renewed panel tracery in the side windows and flowing tracery in the central one. Above the clerestory is an embattled parapet. The tower is unbuttressed and has no windows in its square portion. The north wall bears a stone tablet recording the opening to view of the building during street-widening in 1905. The top of the tower has broaches which turn the structure octagonal: this has single, square-headed traceried windows and is topped by an embattled limestone parapet. Behind this is a small louvred turret of 1736. The south side of the building faces on to Cathedral Yard and is of 19th century construction. The main feature here is the gabled chancel with a large five-light window with Perpendicular tracery. To the left of this is an entrance with a two-light window and a traceried parapet above.

INTERIOR: The interior is now divided into two parts. The north part, what was probably the original church with tower, nave and chancel, remains in religious use with its original orientation and is divided off from the rest by a timber and glass screen. There is an arch (filled in by a glass screen of 1985 by the Harrison Sutton Partnership) between the nave and chancel with a moulded head and responds: large angel busts, holding shields, form the capitals. The details of this arch and its capitals are repeated in the piers to the arcades and to the pier supporting the south west angle of the tower: this unusual pier and arch design is derived from work at the cathedral but the angels would seem to be of the 1820s scheme. Over the chancel arch is a large five-light window. The nave is covered by a very shallow segmental plaster roof, perhaps dating from the 1820s. Over the south aisle is a large octagonal skylight of that time.

PRINCIPAL FIXTURES: The principal items are a series of wall monuments of the late 17th and the 18th centuries: the most notable (such as that to William (d 1683) and Mary (d 1658) Hooper) are catalogued in Cherry and Pevsner. Within the tower is a notable relief of the Last Judgment by John Weston of Exeter: a fragment of a larger (signed) monument formerly in the demolished church of St Kerrian, Exeter, it is one of a number of such panels carved by Weston. There is a small 18th century royal arms north of the chancel arch. The font is a conventional octagonal piece with a traceried bowl and is probably 15th century. At the east end of the chancel three arches frame the Decalogue, Creed and Lord's Prayer: this work probably dates from the 1820s. The walls of the church carry 32 mid-Victorian polychromatic tile memorials. There is 1840s glass by Beer of Exeter in the chancel and, in the 19th century chancel, work by the Drake, also of Exeter.

HISTORY: St Petrock's is the largest and most central of Exeter's surviving ancient parish churches and spans the space between the High Street and Cathedral Yard. The original parish was, at a little over two acres, tiny but was a prosperous commercial and residential area and the church thus attracted a wealthy and influential congregation. In the Middle Ages the building was scarcely visible, being hemmed in by houses and shops. The widening of the High Street in 1905 and the effects of the 1942 Blitz opened up the site somewhat although the east and west sides are still partially embedded in commercial premises. St Petrock's is possibly an ancient foundation but documentary evidence only begins in the 12th century.

The structural history of the church is both unusual and complex and led Nikolaus Pevsner to memorably describe it as `among the most confusing of any church in the whole of England.' Originally aligned east-west along the High Street it originally probably consisted of a tower, nave and chancel (the last now an interdenominational chapel). When enlargement was needed the cramped site meant that this was only possible on the south. Extensions took place from the early 15th century to the late 19th. A south aisle was added in the early 15th century and an outer one in 1573. A further enlargement took place south in 1587 and south west in 1828 when there was a radical remodelling by the architect Charles Hedgeland who provided the distinctive roofing with a clerestory and skylight. Then, since the building was as wide as it was long, at his restoration in the 1880s John Hayward altered the liturgical orientation to a north-south one and added a large five-light window facing Cathedral Yard. The orientation returned to the original one in the course of the late 20th century, but a reminder of that introduced by Hayward may be seen in the remnants of tiling and wooden flooring which reveal how once the seating was south-facing. John Hayward (1808-91) was a leading church architect in Devon in the mid 19th century. His practice was based in High Street, Exeter. He also designed the Royal Albert Museum in Exeter, built in 1865-6.

The post-medieval part of the church, now entered from the Cathedral Yard, provides premises for a charity for the homeless and socially deprived. Much of this area is masked by late 20th century mezzanine flooring and other wooden structures designed by Caröe, architects.

REASONS FOR DESIGNATION:
The church of St Petrock, Exeter, is designated at Grade II* for the following principal reasons:
* It is of special interest as one of the surviving parish churches of medieval Exeter. Its tight site has given rise to a most interesting and unusual development as it was expanded southward in the 16th and 19th centuries. The detailing of the internal arches is most unusual.
* The early 19th century work including its use of a skylight arrangement and, probably, the embellishment of the piers, is from a period where such extensive work was uncommon and is therefore of interest.
* It retains a number of fixtures of interest, particularly the series of 17th and 18th century wall monuments, among which Weston's Last Judgment scene is pre-eminent.