A Grade I Listed Building in Moretonhampstead, Devon 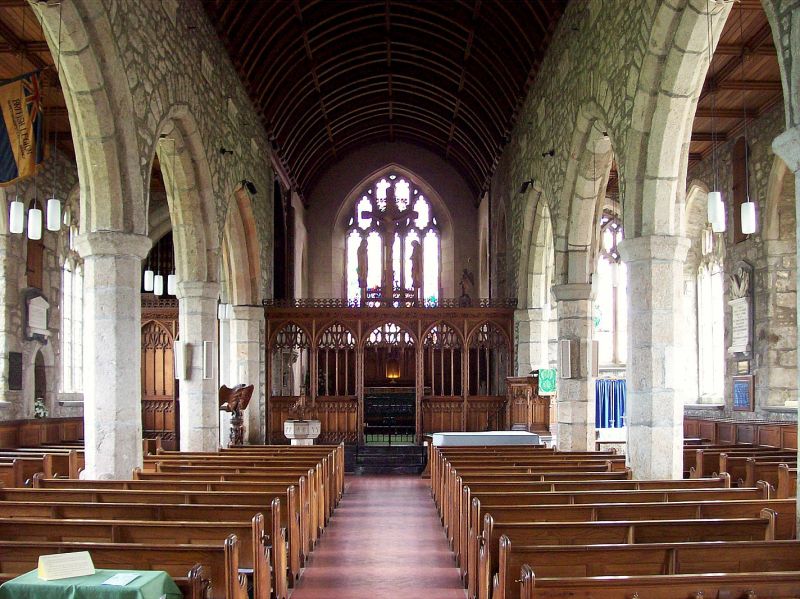 Parish church, early C15 tower and late C15 nave and aisles with heavy restorations
in 1856 and 1905. Aisle and porch walls rendered granite, tower is built of small
dressed granite blocks, rebuilt chancel is of similar construction although
internally the walls of the sanctuary are of Beerstone. Dressed granite and
Beerstone detail to doors and window. Nave and chancel roof is slate with gable
ends; aisles have flat lead roofs.
Nave with north and south aisles, chancel with rebuilt sanctuary and north chapel
dating from 1904. West tower and 2 storey south porch. All in Perpendicular
style.
Chamfered plinth around all the church except for the chancel. Very imposing 4-
stage west tower with battlementing at top, slightly corbelled out from the top
stage and pinnacle at each corner. Pentagonal stair turret on south side with
narrow slit window at each stage. Diagonal buttresses with weatherings at each
corner of tower. On the top stage are 2-light round-headed belfry openings on 3
sides. On the south side at the 2nd stage is a narrow single light window. On the
west face is a wide granite doorway with 4-centred arch, double chamfered with
cushion stops and relieving arch above. Window above is completely restored but
the double relieving arch above is original. Shallow arched niche either side and
above at 2nd stage with inscribed initials on stone either side. On the top stage
is a further niche above the belfry opening with a late C20 statue in it. On north
side of tower at 2nd stage is narrow light with chamfered surround and arched head.
North aisle windows all appear to be late C19/early C20 restorations in granite and
Beerstone with buttresses either side of windows. Pentagonal rood stair turret
towards left end is taller than the aisle and battlemented as are both the aisles.
North chapel projects forward from aisle with buttresses and central large
Perpendicular style window and 2 square-headed mullion windows below. Chancel to
the left has possibly original windows on north and south sides and some reused
fabric to the east window. South aisle windows appear to be late C19/early C20
restoration and also have intermediate buttresses and setback buttresses at the
east end. Slightly projecting demi-hexagonal rood stair turret above the 2nd
buttress from the right. At west end of aisle is diagonal buttress.
2 storey C16 south porch has pointed 4-centred granite arched doorway with ovolo
moulding on inside and outside with cushion stops. Rectangular niche above and on
top of that is a 2-light Beerstone mullion window with cinquefoil heads and
delicately carved foliage in spandrels. Eroded coat of arms above. The cill has
been renewed in granite. Church doorway has granite pointed 4-centred arch with
double chamfer. Porch has stone seats either side and arched holy water stoup on
south wall. 2 early C19 memorials to French soldiers.
Spacious and light interior. 5-bay arcade either side of nave with octagonal piers
which have cushion stops not separate bases. These appear to have been
considerably restored since not all have stops and some have stops only on one
side. No chancel arch. Pointed tower arch, chamfered, springing from chamfered
impost at top of each respond. Chancel extended by almost half as much again in
restoration of 1904 although some features in the sanctuary such as a wide
chamfered granite arch behind the incumbent's stall, the trefoil-headed piscina on
the south wall and aumbry on the north wall have probably been reused.
The waggon roof over the nave and chancel with moulded ribs and wall-plates is
either a heavy early C20 restoration or a reconstruction. The north and south
aisles have flat panelled C20 ceilings. On the east wall of the tower inside the
church is evidence of an earlier high-pitched roof signifying the presence of a
smaller church onto which a new tower was added in 1418 according to the Register
of Bishop Edmund Stafford, and which was then replaced by the present nave and
aisles. The original rood screen was removed in the restoration of 1856 - part
going to St Andrew's Church, Whitchurch and part going to Powderham Castle. In the
restoration of 1904 the present screen was erected. The doorways to the original
rood screen are still visible. Just outside the chancel is a C15 granite octagonal
font with moulded edges and base and the shaft and panels decorated with shall
trefoil-headed niches. No stained glass earlier than the C19 survives. The old
pews were removed in 1856. In 1904 the gallery was removed from the west end of
the nave and at this date also the C18 pulpit was replaced, the only remains of
this is a wooden carved angel sounding a trumpet which was originally above the
sounding board. The organ dates from 1902. In the 1856 restoration the flagstones
on the floor were removed so no tomb slabs survive. There is a good wall memorial
above the south door to Francis Whiddon MA who died January 5th 1656 and "was 32
years minister of this parish". He was the son of Francis Whidden of Whidden in
Chagford. Beneath the details of his family is a short elegiac poem. The memorial
itself is rectangular and inscribed on slate with a plasterwork surround decorated
with shield and family coat of arms at top and bottom and with bunches of fruit and
flowers around the edge.
Source: Parish Church Guide by John Anthony Benton MA 1974 - Rector
Moretonhampstead 1974, Rector of Moretonhampstead 1968-1974.