Range of Outbuildings About 20 Metres West of Plumley Farmhouse 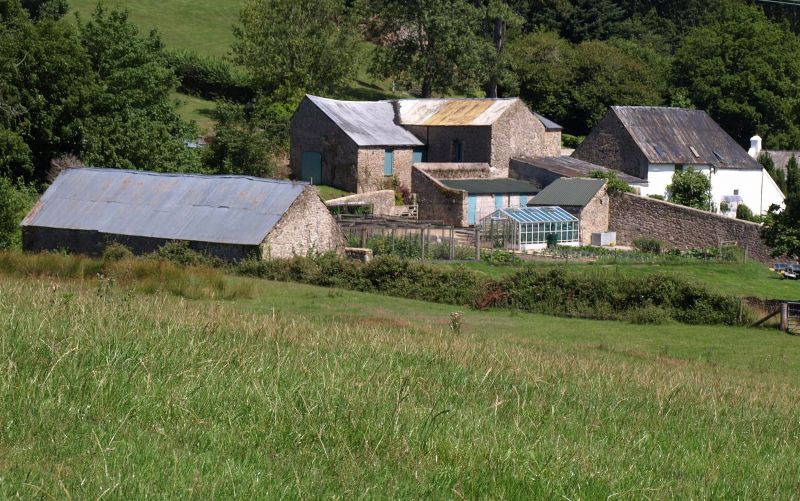 U-shaped range of farm buildings. C19, but incorporating a late C16 or early C17
barn at west end of southern arm. North and west arms are of stone rubble, south
arm has solid walls covered with roughcast; in the case of the early barn the
walling material is cob on a stone footing, but the upper part of the south wall has
been rebuilt in yellow brick and the north-west corner repaired with concrete block.
Slated roofs with late C19 glazed ridge-tiles, except for a section of corrugated
iron at either end of the southern arm; at the west end of this arm, one end of the
early barn has been reduced in height and given a lean-to corrugated iron roof. U-
shaped on plan. Mostly 2-storeyed, but with single-storeyed sections, including the
west end of the early barn. The latter appears to have been altered in C18 by
building an internal stone wall, dividing off the single-storeyed barn section on
the west from the 2-storeyed section on the east; it is not possible to be certain
that the whole building was originally single-storeyed. Its north front, towards
the courtyard, has a small doorway at left-hand end; plank door with wrought-iron
strap-hinges, straight-headed door-frame with pegged joints. At right-hand end is a
large doorway with similar frame; pair of plank doors with wrought-iron strap-
hinges, the upper part of left-hand door having been replaced in C19 and made to
open independently. The older doors of the pair have early scratched graffiti
consisting of initials and dates 1768 and 1779.
Interior has at east end upper floor-beams with run-out stops, possibly re-used. In
upper storey of east gable are 2 slit windows (now blocked by a later building) with
deeply splayed embrasures; one is just above floor level and the other almost at the
apex of the gable. On the outer face the slits have plain rectangular wood frames
with pegged joints. 3 roof-trusses survive, the western one built into the stone
wall dividing the storeyed section from the barn; the trusses have plain feet
sitting directly on the wall-tops, halved dovetailed collars, notched apexes and
through purlins.
The main feature of the C19 buildings is a pit for a water-wheel at rear of the
western section; iron screw survives inside the building.