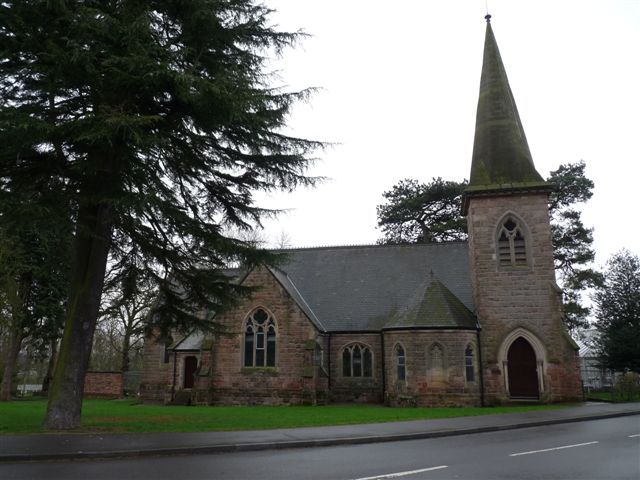 Private church. c1870, built for the trustees of Pastures
Hospital. Rock-faced sandstone with sandstone dressings, plinth
and chamfered eaves band. Slate roofs with stone coped gables
on moulded kneelers, crested ridge tiles, louvre ridge vents,
and iron ridge crosses to all gables. Three bay nave with
transepts and lower chancel, plus north-west tower and north
vestry. West elevation of nave has large central 4-light
geometric tracery, pointed window with hoodmould and rock-faced
relieving arch above. To either side low buttresses and beyond
double chamfered lancets. Recessed to north is the two stage
tower with a 2-light, reticulated tracery window in pointed
chamfered surround with relieving arch over. Similar bell
opening with louvres above and also to north and east sides.
Above again cornice with ball-flower decoration and a broached
stone spire. North elevation of tower has moulded pointed
doorcase with inner mouldings supported on nook shafts, flanked
by diagonal buttresses. To east, attached to the nave, is a
polygonal bay with cusped lancets to sides, that to north
blocked and decorated by relief cross. Beyond to east the nave
has one 3-light, four centred arched window with cusped lights
and pierced spandrels, and the transept has a 3-light tracery
window and clasping buttresses to either corner. Attached to
east is the north vestry with a Caernarvon arched door to north
and a double chamfered lancet to east. Similar lancet beyond to
east in chancel. East window, 3-light with cusped geometric
tracery. South chancel elevation has single double chamfered
lancet, south transept elevation similar to northern one, whilst
south nave elevation has three 3-light four centred arched
windows with cusped lights and pierced spandrels, each with
buttress to west side. Interior has wide hammer beam type to
nave and transepts, chancel roof is panelled. North transept
has stone octagonal pulpit with cusped panelled sides and access
from an ogee headed doorcase behind. East window has
contemporary stained glass, other windows have coloured glass.
Some pews are original but most of the original furniture is now
missing.