A Grade I Listed Building in Grindleford, Derbyshire 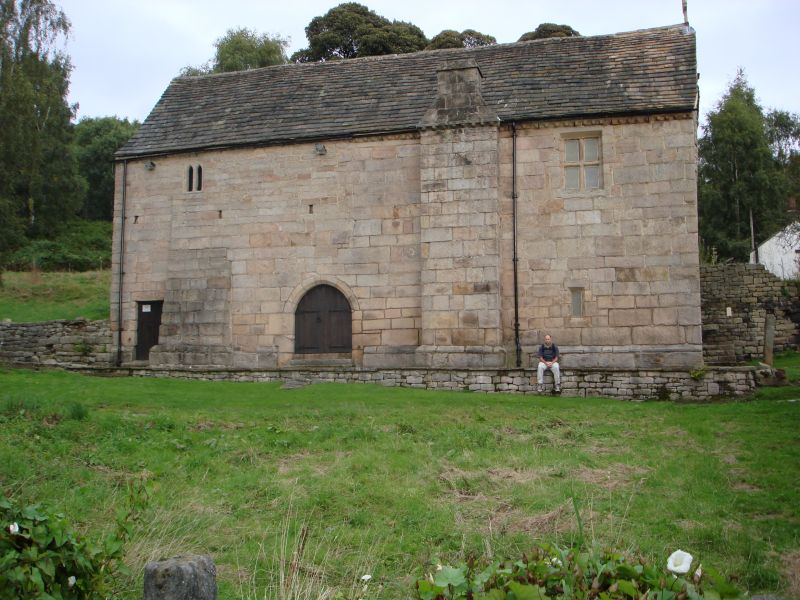 Former gatehouse and chapel, now a Roman Catholic chapel. C14 and C15, with
later alterations, formerly part of a quadrangular house, the foundations of
which survive to the north east. Coursed squared gritstone, massive to south
west elevation, on a low chamfered plinth, with quoins, decorated corbel table,
massive projecting stack to south west wall, and a stone slated roof with cross
finial to south east end. South west elevation; two storeys, four bays, with
floor now removed from north west part. Off-centre gateway with deeply
chamfered shallow arched head and surround. C20 plank double doors. At north
west end, a single doorway with chamfered lintel and surround, and a C20 plank
door. Between doorways, a wide buttress rises steeply to first floor level, but
disturbed masonry above suggests a rebuilding of what was formerly an external
stack, of similar size to that which survives to the south east. Above the
buttress, a small 2-light mullioned window cut from a single stone, with lancet
lights. Massive external stack, shouldered at eaves to the south east of the
gateway. The south east end has a chamfered cross window to the first floor above
a ground floor slit window with a chamfered surround. South east elevation has
a 2-light mullioned window with cusped pointed arched lights to the first floor,
above a slit window with a chamfered surround, and access holes and stone perches
for a former dovecote in the gable apex. North east elevation has 2-light cross
windows above 2-light chamfer mullioned windows, either side of the gateway access
to the former courtyard, with a shallow arched head and C20 plank doors. To
south east of gateway, at first floor level, two former doorways, formerly
served by an external stair, with four-centred arched heads, now windows, with
stained glass. Interior; double purlin roof with cambered tie beam trusses
against gable walls and to the centre, the latter with partition studs above the
tie beam, and mortices to the tie beam soffit for the former ground floor
partition. The two intermediate trusses are arch braced, and have carved angels
to the ends of their hammer beams. The wall posts have carved feet resting on
moulded corbels. To the south east wall, an ogee-headed aumbry to the south west
of the window and a reset altarstone from the ruins of the adjacent manorhouse.
Hearths survive at ground and first floor levels on the south west wall. History:
the building is used as a chapel to commemorate the martyrdom of Nicholas Garlic
and Robert Ludlum, catholic priests, who were arrested at Padley Hall on 12 July
1588, and executed at St Marys Bridge, Derby on 24 July 1588. The Fitzherbert
family of Padley Hall were subsequently persecuted, John Fitzherbert dying in
the Tower of London in November 1590.