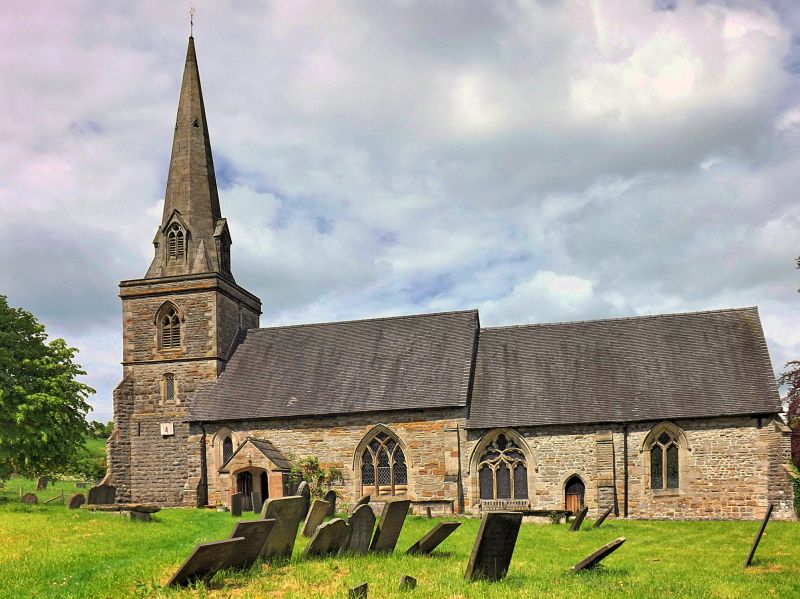 Church, c1300, heavily restored and enlarged by Stevens & Robinson 1847-50 and
later. Rubble limestone with sandstone dressings. Plain tile roofs, West tower,
nave with north aisle and south porch, chancel with north aisle. West tower
rebuilt in 1861. Two light Dec style window to the ground stage of the west
elevation; to the south elevation, an arrow slit window and a sundial, and to the
north, a single storey lean-to. A plain chamfer divides the first from the second
stage, which is blank except for a single light window to the south, with cusped
ogee and segmental arch. String course beneath the bell stage which has 2-light
Dec style windows to the north, south and west. Plain parapet and recessed
broach spire with big lucarnes low down and tiny trefoil ones higher up. The
tower has angle buttresses with three set-offs at the north west and south west
corners. All the window tracery looks C19. Nave south side with buttresses at
each end. Low off-centre porch with four-centred arch and stone slate roof,
supported on chamfered arches. To the left, a single C19 lancet with hoodmould and
stops. To the right, a 3-light window of c1300 with intersecting tracery. The
mullions have barbs at the springing of the arches. Continuing into the chancel,
a 3-light early C14 window, much restored in C19, with ogee centre light,
mouchettes and an oval, all cusped. Plain priests doorway with chamfered surround,
buttress with two set-offs and a 2-light Dec window, the upper parts restored. The
chancel roof is lower than the nave roof. Chancel east wall has angle buttresses
and a 5-light east window of odd design, basically intersecting and of c1300.
Broad nave north aisle of 1847-50 with separate pitched roof. North elevation
with three 3-light windows, with reticulated tracery in the centre window and
intersecting in the flanking windows. Buttress with two set-offs between each
window. Single lancet to the west, North chancel aisle added in 1882, with a
3-light east window, copying the tracery of the chancel south west window but
with different proportions. Single lancet to the north. Chimney stack on the
east gable. Interior. Nave-north arcade of three bays with octagonal piers and
abaci and arches with two wave mouldings and a step. Two bay chancel north arcade
with octagonal pier and abacus and head corbel responds. Double chamfered tower
arch with projecting chamfered imposts. Hammer beam roofs to nave and chancel of
1847-50. Chancel fittings of 1850 or 1882, including communion rails with cusped
gothic arches, poppyhead choir stalls, stone reredos with foliage capitals and
painted panels, and tiled floor. Early C16 chancel screen, with 2-light openings
and flamboyant tracery, Groining and cornice. Restored in 1850. Parclose screen
in the north aisle with single light openings and flamboyant tracery, said to date
from 1519. By the screen, a chest with elementary ironwork, early C14. In the
north chapel painted roof, wooden reredos with painted panels and organ case,
all of 1882. Wall monument on the north wall of the sanctuary, 1790, to Richard
Fitzherbert, an obelisk surmounted by an urn. Between the chancel and north
chapel, a monument to Thomas Beresford, died 1473, and wife. Erected late C16.
Tomb chest, the two effigies tied up in a shroud. Children around the chest,
also in shrouds, stained glass. East window 1877; chancel south, 1879; north
chapel east window, and north chapel north window, 1894.