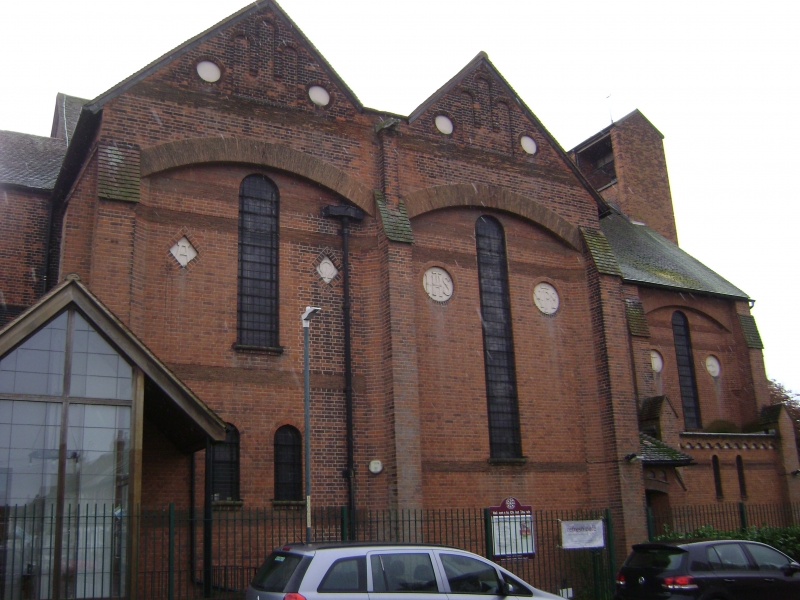 EXTERIOR: 4-bay nave with clerestory, narrow aisles, N transept; W tower; original porch on N side between transept and aisle; W porch; parish rooms to E. Clerestory, brick bellcote. Buttressed nave with lancet windows under wide segmental arches and massive E end buttresses with decorated gables to the E. N and S sides decorated with carvings in roundels and lozenges. The N side (show front) has a tall 2-bay buttressed transept with two gables to the N and round-headed windows under wide segmental tiled arches; blind decoration and roundels in the gables. Flat-roofed buttressed aisle with parapet and small round-headed windows. Hipped roof porch with a studded door with curly strap hinges. The W bay of the S aisle is similar to the N but the remainder is wider and taller with triple windows and a blind canted E end. Chancel has lower roof than nave, chunky square on plan buttresses (one serves as a chimney stack) with brick decoration and blind arcading to the N and S walls; E window is a 3-light triple lancet. The c.1960 tower has a saddleback roof and very tall W window divided into lights of plain glass and flanked by lean-tos with copper roofs. W porch Gabled church room/vestry blocks attached to E and NE of the chancel.

INTERIOR: Plastered with tile and brick dressings and bands. Round-headed chancel arch to plain barrel-vaulted chancel. Sedilia of simple stepped seats in round-headed tiled recess. Flat nave ceiling divided into panels, the cross beams on corbels with capitals continued as a stone cornice, corbels supported on continuous stone piers that form clerestory recesses and the aisle bays. Narrow aisles of low round-headed arches, 2 aisle bays to each clerestory bay. The aisle arcade continues across the N transpet, the E bay floored for the organ chamber. On the S side the arcade is doubled with tiled cross ribs into the S chapel with a low segmental tiled arch to the sanctuary. Marble font with a shallow round bowl on a shaped stem; timber drum pulpit on a stem with timber brackets. Elegantly simple bench ends to nave benches.

HISTORY: W D Caroe was originally commissioned to build Christ Church in 1904. The design was at least in part based on the 6th-century Church of St Appollinare in Classe, Ravenna. Caroe probably derived ideas for the plan form of the church as well as the decorative use of thin tiles and style of the nave arcades and chancel. When consecrated, in 1909, the church was incomplete with only three of the present four bays of the nave. An appeal, ten years later, for £10,000 to complete the church shows the three bays and north transept built, with the temporary west end propped. The church was never completed to Caroe's design with the most obvious departure being the west tower which was added in 1963 along with the final bay of the nave and the south chapel. The original design intended a tower at the east end of the nave with a gabled west end.

SUMMARY OF IMPORTANCE: Grade II as a good example of a Caroe church of c.1909. The exterior, with c.1960 and later additions (not by Caroe) is less successful architecturally than the fine interior.