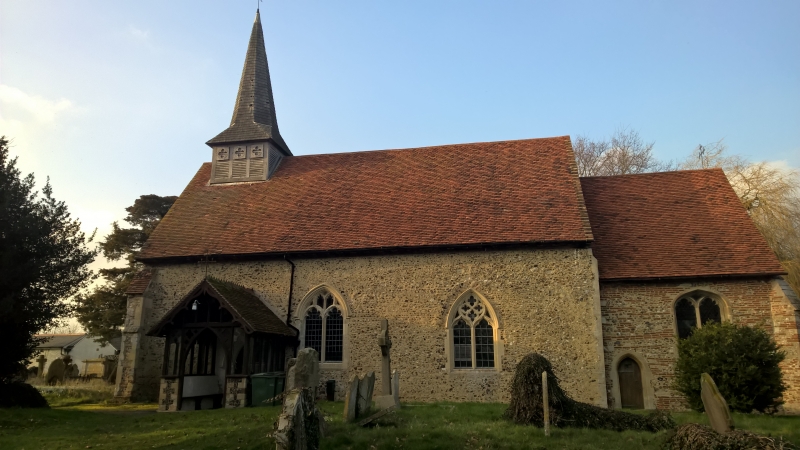 Parish church. C12-C15, extended and restored in C19. Mainly of coursed flint
rubble containing some brick and tile, S wall of Chancel partly of red brick,
with dressings of limestone and clunch, roofed with handmade red plain tiles. N
vestry of gault brick in Flemish bond. Nave possibly C12 but with no
architectural detail ofthat date, on a Saxo-Norman foundation; Chancel early
C13, S wall rebuilt in early C16; bell-turret c.1400; N vestry 1823; S porch
C19. The E wall of the Chancel is rendered externally, with a stone plaque in
the gable dated 1833; the window is C19; the diagonal NE buttress is C19, of red
brick. In the N wall are 2 early C13 lancet windows of one light, both wholly
restored externally. The S wall and diagonal SE buttress are of unusual fabric,
with erratic courses of 'great bricks' in stretcher bond, intermixed with flint
rubble; the bricks are approximately 25 x 16.5 x 4.5 cms; one of them is
inscribed BL GL. In the S wall is one early CL6 window of 2 cinquefoiled lights
with a quatrefoil in a 4-centred head; the external jambs and head are deeply
moulded; the mullion and outer sill are restored; the internal sill is dropped
to form a seat, with a chamfered step enclosing the piscina. Further W is a
doorway, wholly restored externally, with plain internal jambs and chamfered
segmental-jointed rear-arch. The roof of the Chancel is of 9 couples framed in
7 cants, boarded between them, with crenellated wallplates moulded to a bowtell
in great casement, repeated, C15. There is no chancel-arch. The E gable of the
Nave is timber framed and rendered above the roof of the Chancel. In the N wall
are 2 C15 windows, each of 2 cinquefoiled lights with tracery in a 2-centred
head with a moulded label; the rear-arches are hollow-moulded; the sill of the
eastern window is dropped to form a seat and step. Further W is the C14 N
doorway, now enclosed by the N vestry; it has jambs and 2-centred arch chamfered
in 2 orders; the moulded label has mutilated head-stops; above the chamfered
segmental rear-arch is set a voussoir with chevron ornament, c.1130. An area of
disturbed rubble at the E end of this wall indicates the former presence of a
stair to the rood-loft. In the S wall are 2 windows; the eastern is of c.1340,
of 2 trefoiled ogee lights with quatrefoiled tracery in a 2-centred head, with
moulded label; the rear-arch is wave-moulded and the sill is dropped like that
of the window opposite; it has crown glass; the western window is similar in
date and detail to those in the N wall. E of these windows is an internal
recess of uncertain origin, with disturbed rubble outside; it has splayed jambs
and a chamfered segmental rear-arch. W of the windows is the late C14 S
doorway, the jambs and 2-centred arch wave-moulded in 2 orders, with a moulded
label. In the W wall is a window, all C19 except the C15 plain internal jambs
and hollow-chamfered 2-centred rear-arch. On the SW quoins are 2 scratch dials,
one faint. In the floor in the NE corner of the Nave is an inspection panel
giving access to rubble foundations excavated by the Brain Valley Archaeological
Society, 1978, showing that the Nave originally terminated in a narrow
chancel-arch, with an apsidal Chancel on the site of the western part of the
present Chancel. The roof of the Nave is in 4 bays, of which the W bay is
wholly occupied by the bell-turret, with 4 tiebeams on arch-braced wall-pieces,
arched to its collars, with side purlins and crown pieces with collar purlin
engaging high collars, the cowuton couples framed into 7 cants. The timber arches
below the collars are tied to the principal-rafters by 3 short timbers, and
there are pierced tracery panels between them and the main timbers' (C.A.
Hewett, Church Carpentry, a Study based on Essex examples, 1982, 28-9, with
illustration). The wallplates are moulded to a bowtell in great casement, and
the tiebeams, purlins and arched braces are also moulded; this roof is of the
early cls. The most westerly common couple is exposed in the W gable. The
bell-turret of c.1400 is mounted on 4 posts forming a portal frame, with arched
braces of steep 4-centred arcature; the W braces are hollow-chamfered, the other
braces and posts plain-chamfered; the braces engage with attached shafts on the
posts. In the spandrels are vertical and horizontal struts. There are braces
of similar curvature in the N and S sides. Above the tiebeams 2 further stages
are visible, each with curved saltire bracing on each side, and inside them a
similar and later structure supporting the square bell-turret and short
octagonal spire, not examined owing to lack of access. The N vestry has a door
with 4-centred head, and in each side a 2-light window of plastered brick in a
2-centred head; in the N wall is a quatrefoil recess; the roof is flat.
Fittings. The piscina in the S wall of the Chancel is early C16, with chamfered
jambs and 4-centred head, retaining an earlier octofoil drain asymmetrically
placed, probably C14. In the Chancel is a brass of Dorcas (Bigg), wife of
Thomas Musgrave, of Norton, Yorkshire, 1610, seated figure of lady, left hand
pointing to figure of infant, with 2 inscription plates; and a floor-slab of
William Smith and Dorcas, his wife, mid-C17, inscription worn. On the S wall of
the Chancel is a monument of Anne (Grene), wife of (a) Thomas Newman, and (b)
Henry Smith of Cressing Temple, 1607, alabaster and marble tablet with kneeling
figures of man in plate-armour, and lady, with 4 shields of arms; panelled base
with small figures of a daughter and a swaddled infant. Fragments of C14 glass
reset in the tracery of the N windows of the Nave. Above the N doorway are the
arms of Queen Anne before the Union, on canvas in a carved frame. There is one
bell, by Thomas Gardiner, 1737. RCHM 1.