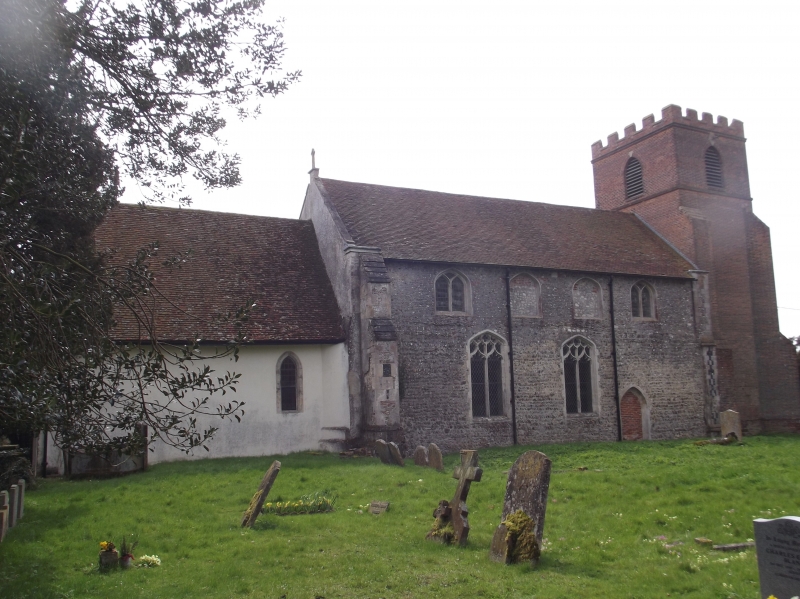 Parish church, C13 and later. Plastered flint rubble with dressings of
limestone and clunch. W tower, S porch and vestry of red brick roofed with
handmade red clay tiles. Chancel mid-C13, Nave possibly older but date
uncertain, S arcade mid-C14, S aisle rebuilt early C16 and repaired in C19,
clerestorey early C16, W tower, S porch and vestry early C19. The Chancel has a
C15 E window of 3 cinquefoiled lights with restored mullions and tracery under a
2-centred head with drip-mould; the external reveals are hollow-moulded. At the
W end of the N wall is a mid-C13 lancet window, rebated and chamfered
externally, with chamfered rear-arch. In the S wall are 3 similar windows; the
sill of the easternmost is carried down to form a seat; the westernmost is a
low-side window of which the lower part is blocked. Between the 2 westernmost
windows is a doorway of uncertain date with chamfered jambs and 2-centred head,
plain ledged door and draw-bar holes. There is a piscina with chamfered jambs,
2-centred head and hexagonal drain, probably C13. The 2-centred chancel arch is
mid-C13, restored; it is of 2 moulded orders with keeled attached shafts,
moulded capitals and bases. The N wall of the Nave has 2 windows, each of 2
cinquefoiled lights and tracery, restored, with 2-centred head and rear-arch.
Further W is the late C15 N doorway, now blocked externally; it has hollow-
chamfered jambs and 2-centred rear-arch. The S arcade is of 4 bays, mid-C14,
altered in the early C16 when the S aisle was rebuilt; the 2-centred arches are
of 2 chamfered orders, the piers octagonal with moulded capitals and bases; the
E respond is obscured by plaster below the moulded capital, and the W respond
has a semi-octagonal attached shaft with a moulded capital and no base. The
clerestorey has on both sides 4 early C16 windows each of 2 uncusped lights with
Y-tracery under a 4-centred head; the middle 2 on each side are blocked. The S
aisle retains a little mid-C14 structure at the W end but was largely rebuilt in
the early C16 and substantially rebuilt in brick in the early C19. The early
C16 S doorway has moulded jambs and 2-centred arch under a square-head, with
segmental-pointed rear-arch. W of it is a blocked window forming an internal
recess. In the W wall is a C20 window with segmental-pointed rear-arch. The
Nave roof is plastered, semi-elliptical; the aisle roof is C19. The W tower was
built in 1812, but the tower-arch is circa 1400, 2-centred, of 4 chamfered
orders. The responds have semi-octagonal attached shafts with moulded capitals
and bases; the W half of the arch has C17 graffiti and is cut off by the C19
wall. There is a consecration cross on the NE buttress of the Nave, incised
cross formy, reworked. The font is octagonal, the bowl and stem with cusped
panels, C15. C15 woodwork is re-used in the C19 pulpit, S door, and seating.
There are 8 bells and a clock-bell, the third by Miles Graye, 1647, the fifth by
Miles Graye, undated, and the sixth by Miles Graye, 1641. On the N wall of the
Chancel there are monuments (1) to Devereux Tallakarne, 1627, and Mary (Steward)
his wife, tablet with terminal figures, entablature and oblisks, 3 shields and
defaced inscriptions, (2) to William Gardner, 1667, and Margaret his wife, 1683,
marble tablet with Ionic pilasters, cleft pediment and shield of arms. There is
a floor-slab in the Chancel to William Sharpe, 1692. C18 painted texts are
partly revealed above the tower arch and high on the nave walls.