A Grade I Listed Building in Goodworth Clatford, Hampshire 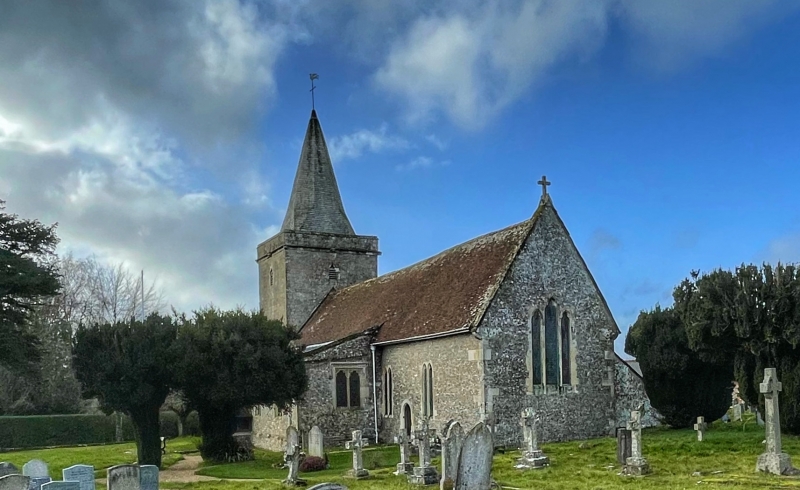 Parish church. C12, late C13, circa 1340, C15, and late C19. Norman nave now
represented by arcading of 3 bays on the south side (with C13 pointed arches with
dog-tooth ornament resting on scalloped caps) set at the east end against
a massive recangular support (with a wider arch beyond in the position of the
first chancel). These are 3 late Norman bays on the north side of the nave with
moulded caps and round columns. The chancel is C13, with coupled lancets. The
aisle walls and windows, of coupled cusped lights, are C15, the south side being a
widening of the earlier aisle and absorbing A C13 south trasept, built originally
with the chancel. The tower at the west end is of the mid C14. Vestry of the
mid C19 with later northward extension, and late C19 south porch. The exterior
has a single ridge to the tile roof, another ridged roof above the north aisle,
and a lead sloping roof to the south aisle; the walls are of flint with stone
dressings. The tower of 2 stages is of ashlar, with parapet mouldings, set-off
moulding to the middle band and a plinth, with small ogee openings (coupled as a
west window), and there is a shingled broach spire. Tiled and gabled porch on an
open timber-frame on a stone wall. The front is C12, being a Purbeck square
top with arcaded sides, on a central drum, with 4 corner shafts moulded top and
bottom. There are several wall monuments of the early C19, moulded top and bottom.
There are several wall monuments of the early C19, three C18 paintings of religious
subjects, and Prescription boards. On either side of the north aisle (former) east
window are moulded canopies and brackets for statuary, and the east side capital
of the eastern columns on the north side of the nave has carved heads of the
medieval period. The ceiling to the chancel has arch-braced collars, and the nave
has King-post trusses.