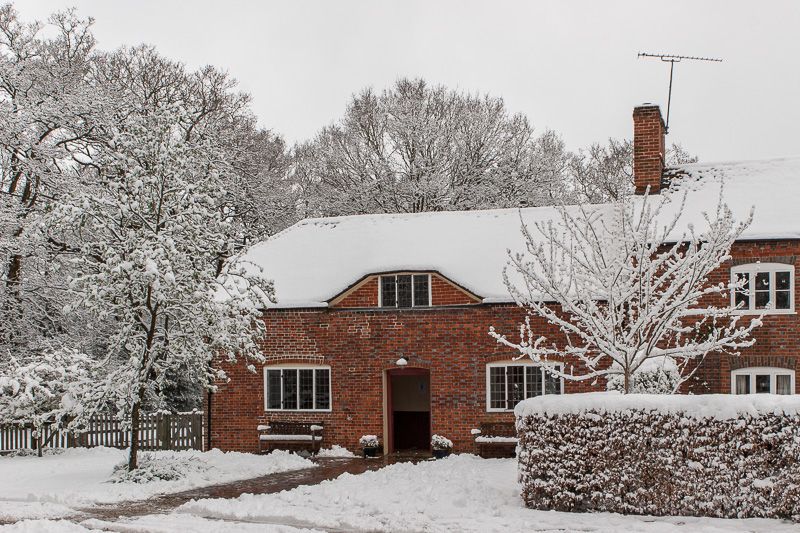 1798, and circa 1805. A notable non-denominational chapel of first date, remodelled at the later date, with re-orientation of the interior causing a change of entrance from the west to the south side. In 1826 the property was transferred to the trustees of the Countess of Huntingdon's Connection. The interior is almost a square, formed by 2 equal east-west units and a narrow north aisle, the roof being supported on 2 thick columns (under the valley of the double pitch) and 2 thinner columns (separating the aisle). There are 3 bays, with the columns linked by arch-braced tie-beams, supporting Queenposts, resulting in a flat ceiling at collar level, with sloping sides, continuing
to a lower level above the north aisle; with a dormer in the centre of each side of the southern unit. The doorway leads into a panelled lobby, giving entrance on each side to north-south passageways between the central set of bench pews and each outer set. The pulpit is in the centre of the north aisle. Tile roofing, 1/2-hipped at the west side, where the ridge masks the inner valley; plain brick fillet at the eaves; the south dormer is under an 'eyebrow'. Walling is red brickwork in Flemish bond with blue headers, a rubbed flat arch to the wide west window, cambered arches to other windows. Square leaded casements, the west of 7-lights. The south elevation is symmetrical with the dormer (cill at eaves level) above the central doorway, which is flanked by a window on each side. There are plain double doors each of 3 panels. Above the west window a brick is incised with the date 1798.