A Grade I Listed Building in Quenington, Gloucestershire 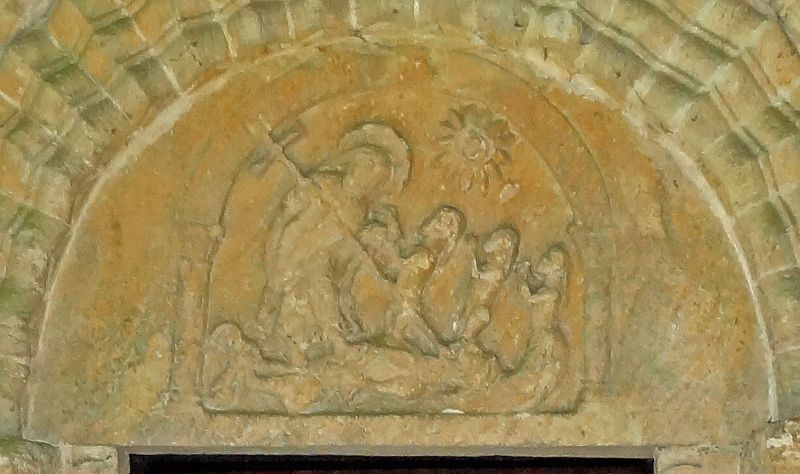 Anglican parish church. Recorded by 1100, chancel windows of C13
and C15, nave windows probably early C17. Restored 1882. Rubble
stone, sprocketed stone slate roof with coped gables and
saddlestones with cross finials. Nave with north porch and south
porch canopy and bellcote at west end, chancel with vestry of 1882.
Nave has pilaster buttresses and string course of C12, walls raised
probably in early C17 with insertion of two 3-light stone mullion
windows, with square hoodmoulds on south side. Large open timber
work C19 north porch with gable, bellcote with octagonal spire
replaces west tower added before 1825 and removed in 1882. South
porch canopy formed by large gabled hood resting on lower stages of
flanking stepped buttresses. North and south porches both have
very fine Norman carved doorways and tympana. North doorway has 3
orders with different chevron mouldings and carved abaci and
capitals. Tympanum represents the Harrowing of Hell, and may be
later. South porch all of one date with guilloche, pellet and
beakhead mouldings, continued down jambs. Tympanum may be earliest
representation of the Coronation of the Virgin, surrounded by
symbols of the Evangelists. Chancel has single round headed light
on south side and small lancet to north, obscured on outside by
vestry, with deep, long splayed inner reveal. East window, 3-light
Perpendicular, copied in 1882 from west window. Plain plastered
interior, 5-bay nave with 4 bays to west with arched wind braces on
lower tier, fifth bay and chancel with panelled faceted ceiling.
Late C16 font with cover of 1662. Interior refitted in 1882.
Several marble wall monuments including one of late C17, and C17
shield brass on floor near north door. Initially called St. Mary's
in C12, the church was rededicated to St. Swithin by 1735.
(VCH, Gloucestershire, Vol.VII, 1981; David Verey, The Buildings
of England: Gloucestershire: The Cotswolds, 1979)