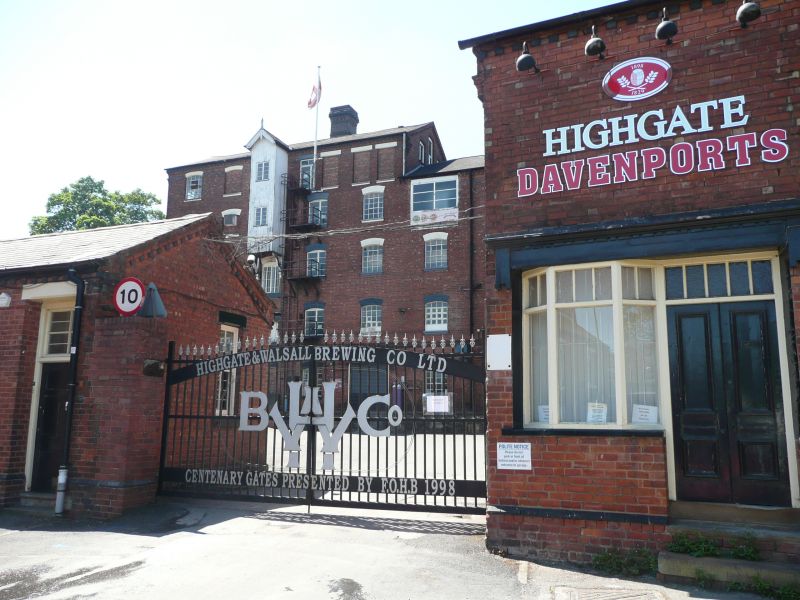 Church of England Parish: St Michael and All Angels, Caldmore with St Mary and All Saints, Palfrey

MATERIALS: The building is of red brick with Welsh state roofs. There is some blue brick dentil eaves cornicing. The rear delivery area is constructed of steel.

PLAN: The brewery has five storeys and a cellar to the left, and four storeys to the right. The building is single depth, with a staircase to the left of centre. Rooms are subdivided in accordance with their brewing functions. To the rear is an attached single-storey range, built in-line with the main range across the five bays to the north. The rear range has been opened up at ground-floor level for access to a late-C20 addition, constructed of concrete block with a steel roof. Some floors are restricted in height. Attached to the right are two single-storey additions, probably of 1919 date. Attached to the left is a later-C20 boiler room addition.

EXTERIOR: The main elevation is of seven bays. The five bays to the left include the five-storey part of the range. The four-storey section to the right is of two bays. The windows are mainly cast-iron casements under painted cambered heads, although some openings are blocked or altered. The four attic windows of the central bays are closely-spaced under flat arches, and three are sealed. To their left is a timber-boarded sack hoist that spans the upper three storeys, with decorative brackets and a finial on its gabled roof. There is a double plank door in second bay from left, above which is a Mitchell's and Butler's licensing plate. In front of the four bays to the right is a loading platform, below alternate C20 doors and windows. The single-storey extension to the right, probably of 1919, has one blocked window and a ridge ventilator. The main elevation stands under dentil eaves cornices, and there are moulded brick kneelers. The left flank gable elevation has three cast-iron casements on each floor, with some altered panes and openings to accommodate ventilator flues or, at first-floor level, a grain chute. The C20 boiler house is not of special architectural interest. To the rear, rising from an attached C20 single-storey range is a tall, square, brick chimney, of late-C19 date, with iron banding and a moulded cap. The right flank of the main building has the two gabled, single-storey ranges with cast-iron casements and brick corbels below the eaves. The rear elevation has cast-iron casements with some alterations. To the ground-floor are single-storey additions, partly under a hipped roof of 1919.

INTERIOR: The original plan is largely retained, along with many traditional brewing vessels and equipment, including: the well water tank, 1900; hot liquor tanks, 1930s; malt hopper, 1920; the wooden spring screen is original (1899); the malt crusher is a German belt-driven model of 1922; coppers, 1952-7; hopback, 1955; jackback, 1952; wort receiver, 1948; paraflow, 1970 and fermenting vessels. The making of beer depends on a gravity method. At the top of the building, the malt is crushed and separated. On the floor below, water is heated to boiling point and mixed in mash tuns with the malt taken from the grist case. After mixing, it is sieved and boiled in copper kettles on the second floor, where hops are added. From there it is run off into the hop back and cooled before fermenting in the vessels on first-floor level. Yeast is added and the brew is left to ferment. The beer is kegged at ground-floor level, and was originally stored in the cellar. There is now a kegging and storage facility to the rear of the ground floor. The fermenting vessels include round, oak examples of 1905 and later replacements, all re-lined. The timber stairway is its original location. There is a cellar lift to the ground floor at the front of the building, and trapdoors serving a hoist and pulleys to the left of the upper floors. The rear ground floor area has some substantial cast-iron columns incorporated within a later steel structure.

HISTORY: The Highgate Brewery was built for J. A. Fletcher and became operational in 1898 as a small brewing concern; producing a single, mild ale, and employing only three or four people. The tower brewery building is shown on the Second Edition Ordnance Survey Map of 1903. By 1914, it had begun to expand to produce bitter and bottled beers and the brewery was enlarged in 1919. Highgate Brewery merged with John Lord's Brewery to form Walsall Breweries Proprietary Ltd in 1924. The Fourth Edition Ordnance Survey Map of 1938 shows the building extended, principally to the north and west, although the broken building outline may indicate that construction work was underway at the time of survey. Production at the brewery continued to expand between the wars and in 1939 the large brewers Mitchell's and Butler's (M&B) bought the brewery, and its tied houses, with a view to closing down their competitor. However, wartime rationing altered their plans, as the brewery qualified for vital, extra, rationed supplies, and brewing continued at the site.

The success of the brewery for M&B is reflected in their retention of ownership after the end of rationing in the early-1950s. The brewery was producing 750 barrels per week by 1948, which grew to 2,500 barrels of mild ale alone by the 1970s, at which time it employed 60 people. Much of the brewing equipment was replaced or adapted during the course of the C20. In 1995 the brewery was sold to the management by Bass, who had by this time acquired M&B. The brewery was only producing 400-500 barrels per week by 1998, the year in which centenary gates were installed at the site entrance to commemorate 100 years of brewing at Sandymount Road. By the early C21, production had increased once more and, following a further sale in 2007, the Highgate Brewery was combined with the Davenports brand. The brewery closed in June 2010.

REASONS FOR DESIGNATION
The Highgate Brewery at Sandymount Road, Walsall, built in 1898, is designated at Grade II for the following principal reasons:
* Architectural: the brewery is built using quality materials to a well-executed design.
* Rarity: relatively few buildings of this type survive and in a recognisable form.
* Intactness: although there have been alterations, these have largely been carried out in sympathy with the existing fabric and do not markedly detract from the building's special interest.
* Interior Fittings: the brewing equipment, while being of varied dates, represents an important collection of in situ fittings that demonstrate the evolution of this historic brewery.