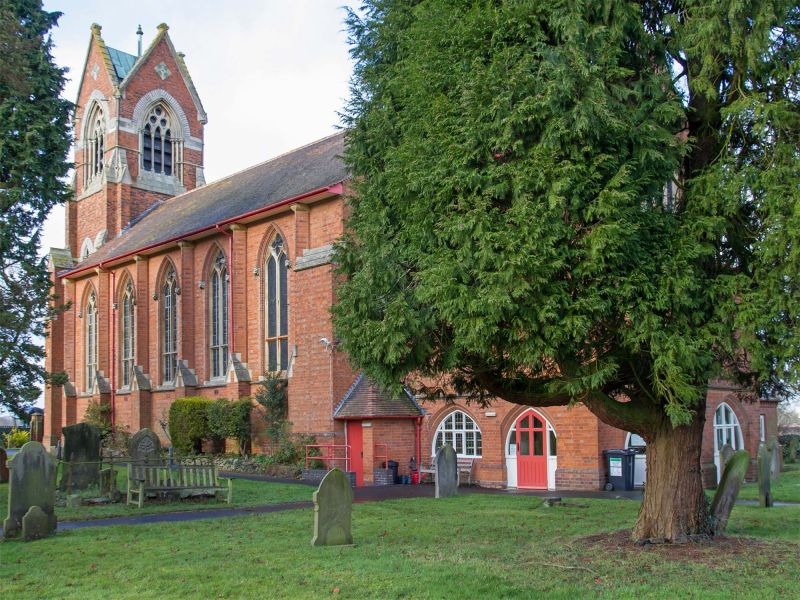 PLAN: West tower forming a large porch. Five-bay nave without aisles, raised chancel and organ chamber (north) with rooms below including an apsidal crypt under the sanctuary.

EXTERIOR: The stridently Early English style Gothic west tower of 1860-1 is by G.T. Robinson, of red brick with varied polychrome dressings. It has angle buttresses with set-offs. It finishes with a gable on each face, and steep tiled roofs with ridges forming a cross. The original ironwork and big crosses here are lost. Each gable has a single three-light bell-opening, with three circles in the tracery. Below, paired lancets frame a clock face. The main entrance is west-facing, with elaborate double doors set well back, and detached shafts between and in the reveals. The doors have triple cusped heads, and a commemorative inscription in a single band over both doors. In the tympanum is a cusped circular medallion depicting the Ascension. Mr Wood was the principal stone carver for the tower. The outer framing arch is richly moulded, with dogtooth, bands of foliage and stiff-leaf crockets, on multiple columns of green Horton and pink Mansfield stone. The stone gable over the entrance continues straight down into sloped buttresses. A diverting detail is the staircase rising diagonally up the north face of the tower, corbelled out on a curving arch. Behind all this activity the gabled front of the nave barely notices. Bidlake's nave is much more restrained, with five tall two-light windows with a single transom low down; the tracery is curvilinear. Between them heavy buttresses finish with gabled tops at the level of the window cills. Above rise slim projections of triangular section, a foretaste of the interior arrangement. Unusually for a church the eaves project, so that the buttresses are capped by the eaves soffit. The chancel is blind at the north and south, and has a big five-light east window with Free Gothic tracery. Below this is a roofed three-sided projection which houses the sanctuary. The chancel is raised over a crypt with broad arched openings. Those under the sanctuary were glazed in 2001-2; a low unobtrusive kitchen extension was added north of the chancel at the same time.

INTERIOR: The west doors give onto a small but richly vaulted vestibule in the tower base, in the C13 style. The nave is by contrast remarkably spare and elegant, faced entirely with buff brick. Below the window cills, the walls are panelled in oak. The dominant features are the unmoulded triangular projections between the nave windows; like extensions of the window reveals, but so big that there is no flat wall left in the sides of the nave except the little above the window embrasures. The point of each projection continues upward to act as a springer for the roof truss. Bidlake's extrapolation of the Gothic style here exceeds St Agatha Sparkbrook, for which St Patrick seems to have been his preparation. Phillada Ballard describes it as "a glorious interior space of great clarity, brought alive by the fluidity of its surfaces". The oak roof has simple arched trusses with painted patterns, and boarding between the rafters. The chancel arch has chamfered mouldings of brick, dying into unbroken canted walls that form the piers. Access to the built-in pulpit is through an opening in the north pier, via a brick arch with triple wave mouldings. Steps up from the crypt vestries emerge either side of the arch. A flight of eight steps leads up to the raised chancel; a raised plinth of c. 2002 obscures the lowest two steps. The chancel is floored in black and white marble. The east window is of five lights with free Gothic tracery. Below is a low moulded arch opening into a small vaulted sanctuary lit by two tiny windows in the canted side walls. The sanctuary has a stone rib vault with stencilled compartments to the ceiling.

PRINCIPAL FIXTURES: The elaborate reredos of 1910 is of oak, with Flamboyant tracery, a frame of thickly carved vines, and an oil painting by Frederick W. Davis of Birmingham depicting the Last Supper, the carefully observed heads set against a gold background. The east window, altar, rails, stalls and chancel screen are also of 1910; Free Perp, of finely carved oak. The style and quality suggests that the Bromsgrove Guild may have supplied some fittings. The organ case is of 1913. Of the same date are two big paintings on canvas set in arched recesses on the nave west wall, of the life of St Patrick, by Bernard Sleigh, a member of the Bromsgrove Guild. Between these is a balcony of oak sprung from vaulting over the west door, and behind that is the tower arch, closed by an oak screen. Balcony and screen were added in 1936. Behind the organ survives fragments of an elaborate Arts and Crafts scheme of wallpaper-like painted decoration which once covered the chancel. The First World War memorial window is by Pearce & Cutler, c. 1920.

HISTORY: St Patrick began as a chapel-of-ease to the parish church of Tanworth-in-Arden, about three miles south. The churchwardens who instigated the meeting in 1827 at which it was decided to build a chapel at Salter Street, were members of the Burman family (benefactors of the later building phases). Funds came from the purchase of land in the parish, to build a feeder reservoir (now Earlswood Lakes) for the Stratford Canal. The chapel was finally built in 1837-40 to the design of James Benjamin Harper of Henley-in-Arden, and was a simple five-bay brick building with galleries, seating 390. In 1860-1, Thomas Burman of Waring's Green commissioned the building of the tower in memory of his parents; it cost about £1200. In 1897 Miss Elizabeth Burman commissioned the rebuilding of the nave and chancel by the architect W.H. Bidlake. The high-quality fittings of 1910-13 were gifts by the Misses Mynors in memory of their father, vicar here 1846-86. These were perhaps also designed by Bidlake, who was engaged by the same clients in 1908-9 to add a tower at Wythall church, Worcestershire. William Henry Bidlake (1861-1938) was born in Wolverhampton, the son of an architect. He studied at the Royal Academy Schools, London, and under Bodley & Garner, the outstanding late Victorian church practice. He set up in independent practice in 1887, and taught architecture at the Birmingham School of Art from 1893. He designed many Arts and Crafts houses and several Gothic churches of which St Agatha, Sparkbrook, is acknowledged as his masterpiece. G.T. Robinson (1829-97) was a High Victorian "rogue architect" from Leamington Spa; he built much in Wolverhampton.

REASONS FOR DESIGNATION:
The Church of St Patrick, Salter Street, Cheswick Green, Solihull, is designated at Grade II* for the following principal reasons:
* The fine High Victorian Gothic tower by G.T. Robinson (1860-1), forms a striking and unexpected accent in a wholly rural landscape
* Bidlake's inventive nave and chancel (1897-1902) prefigure many design elements of his masterpiece, St Agatha, Sparkbrook
* The finely handled interior of the nave (designed 1897) prefigures the C20 in its stripped down and stylised interpretation of Gothic.
* The raised chancel and low recessed sanctuary create a rare sense of progressive spatial distinctions within a simple mid-sized church
* High quality fittings, mainly of 1910-13, were possibly designed by Bidlake and include work by artists associated with the Bromsgrove Guild