A Grade I Listed Building in St Michael's, Coventry 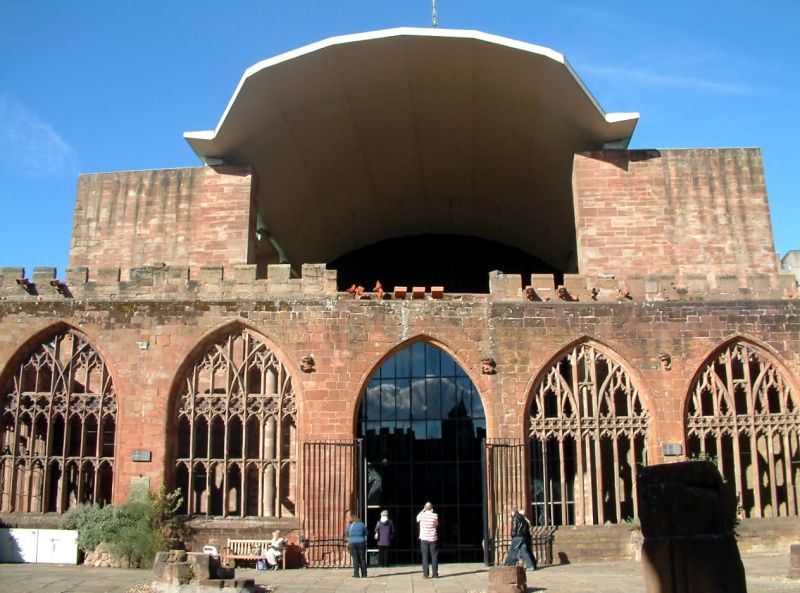 Cathedral. 1951-62. Designed by Sir Basil Spence. Red sandstone ashlar with
green slate cladding to chapels; concrete roof. Lofty space of 7 bays with nave; full height aisles; no clerestorey; full height Lady Chapel and Western (liturgical) porch; circular chapels to north-west (lit) and south-east (lit). Cathedral aligns east-west. Built at right angles to the ruins of the old cathedral, formerly Parish Church (q.v.) and attached to its north-east corner. Nave and chancel walls of new cathedral canted outwards in vertical bands, producing a 'saw-toothed' plan, with vertical 4-light stained glass windows facing north-west (lit) and south-west (lit).
Porch with tall circular sandstone piers and 3 flat topped concrete vaults. Baptistry to south west (lit) with convex wall, partly solid and partly glazed with closely spaced vertical stone mullions; Epstein's sculpture of St.Michael and Lucifer attached to baptistry wall by the porch. Chapel of Christ the Servant to south-east (lit) circular with closely spaced vertical mullions. Chapel of Unity to north-west (lit) polygonal with largely solid walls of riven slate, and projecting fins tapering upwards, with vertical strip glazing to ends. East wall blind. West wall fully glazed, from floor to ceiling and wall to wall; 19 lights divided into 8 horizontal bands. Bronze glazing bars, plate glass with engraved figures of saints and angels by John Hutton.
Low roof, crowned by openwork metal fleche crowned by cross designed by sculptor Geoffrey Clarke. Interior with cruciform reinforced concrete piers, tapering to the base and supporting concrete 'ribbed' canopy with panels of timber slats between ribs. This has the appearance of a vault but is structurally and visually separate from the walls.
Interior contains fitments by the most prominent British artists and designers of the period. These include font and choir stalls designed by Spence himself, monumental inscriptions to walls and floor by Ralph Beyer, stained glass to Baptistry by John Piper and Patrick Reyntiens, to aisle walls by Lawrence Lee, Geoffrey Clarke and Keith New, to Lady Chapel by Einar Forseth, to Chapel of Unity by Margaret Traherne; pulpit and lectern by Spence, the latter with an eagle book rest by Elizabeth Frink, in bronze: tapestry to east wall of Lady Chapel, dominating the Cathedral,by Graham Sutherland, altar cross and crown of thorns by Geoffrey Clarke, large ceramic candlesticks by Hans Coper, chairs by Russell, Hodgson, and Leigh: mosaics by Einar Forseth, ceramic panels by Steven Sykes, etc.

Coventry Cathedral was one of the most important architectural commissions of its date in Britain, and was built following an architectural competition in 1951. The scheme was also notable in its period for the degree to which the bomb damaged shell of the Medieval church of St.Michael was preserved.