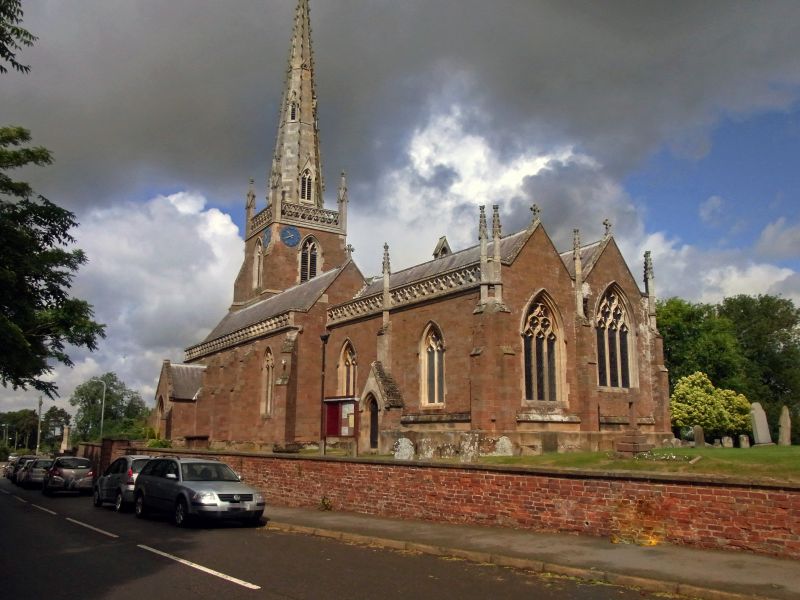 Church. Medieval origin, rebuilt 1849 by R.C. Hussey. Restored 1874 by W.
Butterfield. Sandstone and ironstone ashlar, limestone dressings. Slate Roof.
Chancel with south aisle, aisled nave, north and south porches, west tower and
spire. Decorated style. 3-windows with flowing tracery in east walls of chancel
and south aisle. 2-light windows in side walls. Traceried parapet to nave and
chancel. West tower with pinnacles and crocketed octagonal spire. Interior:
3-bay south arcade to chancel, in part C14-C15 has double-chamfered arches and
octagonal piers. Perpendicular double-chamfered arch with half octagonal
responds between chancel aisle and south aisle of nave. 5-bay nave arcades with
octagonal piers. Chancel roof, probably by Butterfield, has timber boards with
plate tracery and stencil decoration. Red and grey marble font, probably also by
Butterfield. Pulpit c.1880, grey and pink marble. Mosaic saints flanking altar,
c.1880. Early C14 stone effigy of a knight, cross legged with a rosette between
his feet said to be a member of the de Ros family, lords of the manor from the
C12 to Cl6. Circular Romanesque font, weathered, with traces of cable moulding,
Head of C14 churchyard cross, has badly eroded reliefs of the crucifixion with
figures of a priest and a warrior. Stained glass: south aisle of chancel 1849 by
Wailes and in the chancel, 1863 by Hughes. The chancel was said to have been
decorated under the supervision of Butterfield in 1874-80 but was redecorated in
1928. A reredos by Butterfield is said to survive beneath the present panelling.
Funds for rebuilding the church were raised by a national appeal made by the
Rector A.B. Clough, who pointed to the increase in population due to the
building of the canals and the need "to extend the means of religious
instruction to that benighted class of people engaged in our inland navigation".
(Buildings of England: Northamptonshire, p.120; Anon.: Church Guide, 1984).