A Grade I Listed Building in Stechford and Yardley North, Birmingham 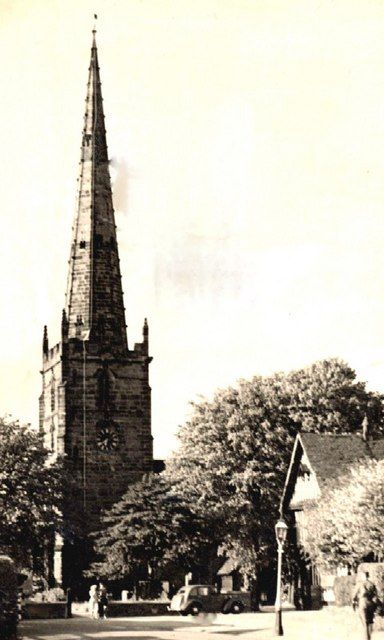 Principally of the C14 and C15 but of C13 origin. A substantial sandstone parish
church with nave, aisles, transepts and chancel. Lofty west tower of the C15,
crenellated, in 4 stages and with diagonal buttresses to the crocketed hexagonal
spire. The south wall of the chancel retains C13 work and the south doorway,
giving onto the C15 timber-framed porch, is also of C13 build. The church was much
enlarged in the C14 when the north and south transepts were added, the nave largely
rebuilt and the chancel probably lengthened. The tower and north aisle are the C15
additions. The south wall of the chancel contains a very narrow lancet flanked by
C15 2-light window and there is an ogee arched doorway. C14 chancel arch. The
north chancel wall was rebuilt in 1890 when the chancel was lengthened and the
vestry added. But part of the north-east window is probably medieval. The north
arcade has three C15 splayed arch bays but the east bay is the original C14 transept
bay. The south nave wall windows are 2-light C14, similar to the probably reset
ones in the north aisle. The C15 porch over the south doorway has elaborate
traceried sides to the oak frame and curved bargeboards. The pulpit was given in
1627 and has C17 panelling. Fine west window of the Last Supper by John Hardman
and Company of 1892. Some fine monuments from the C15 to the early C19, that of the
Rev Dr Henry Greswolde + 1700 in the chancel particularly unusual: a pedimented,
curtained cave containing marble statues of the parson and his wife, the recess
framed by medallions of their 11 children - the whole flanked by festoons.