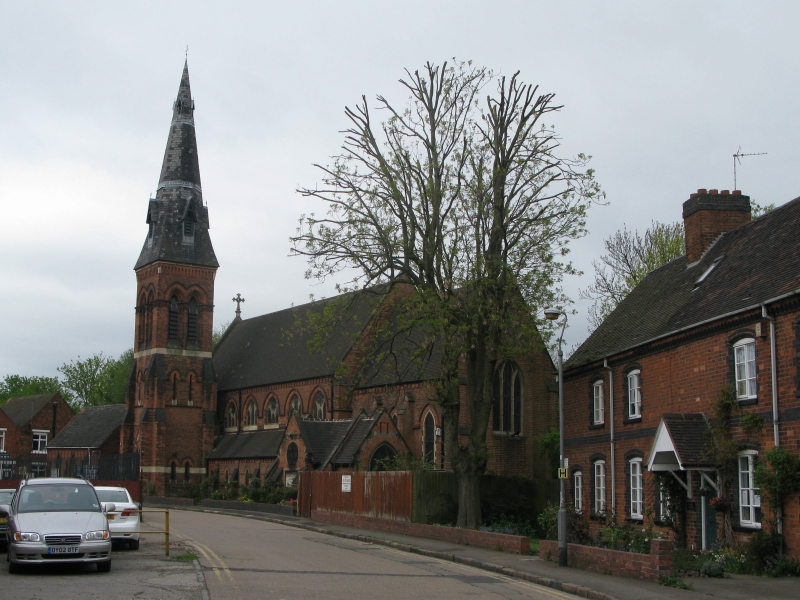 II
An Anglican church designed by Frank Barlow Osborn and built in 1873-4 by William Partridge, incorporating a slightly earlier schoolroom as its chancel.

MATERIALS: The building is constructed from red brick on a blue brick plinth, with blue brick and stone dressings, under plain tile roofs, except for the spire, which has a slate covering.

PLAN: The church is oriented north east-south west, but liturgical compass points are used in this description. The plan has nave with vestries to the west, chancel, passage aisles, north organ chamber, south porch with tower and spire above, and south chapel.

EXTERIOR: The building is in a Gothic Revival style with pointed arches. The five-bay nave has single lancets between buttresses, with a continuous hood mould broken by the buttresses, and tripartite windows to the clerestory above; they have a similar hood mould, and alternate windows have a flower window above a shorter lancet; the clerestory windows have stone tracery set slightly inside brick arches. The south chapel has a gable to the main elevation with a circular traceried window; the chancel, set slightly lower than the nave, has lancets with brick hood moulds. The nave and chancel both have an adapted frieze at eaves level, and raised, coped verges. The frieze is repeated on the top stage of the tower, which has a broach spire with louvred, gabled dormers above paired, high, louvred lancets to the upper stage, and a continuous, brick hood mould. The west end has a circular window above triple lancets with brick hood moulds; the ground floor has paired lancets with hood moulds to either side of a similar small entrance doorway. The north organ bay is canted, with blind walls. The tower, which has battered angle buttresses, sits above the porch, which has a pointed-arched doorway with a relief carving depicting the Ascension or the Transfiguration above and flanking columns with stiff-leafed capitals. Above the doorway is a triangular apron of tiles in cream, impressed with a foliate design.

INTERIOR: The interior has a hammer-beamed roof to the nave, and a simpler, vaulted roof to the chancel; the passage aisles have rafter roofs with ashlar pieces. The arcades are formed from moulded brick arches over short stone piers on moulded bases, with capitals carved with volutes, flowers and foliage. The chancel arch has attached half-columns springing from angel stops, with similar capitals to those in the nave; the arch is of moulded brick. The pulpit, in carved marble with figures of St Peter, St Paul and St Cyprian, runs into a low marble division below the chancel arch, with carved decoration and pierced quatrefoils. The east end has timber panelling and a timber altar-back with panelled, moulded and cusped decoration. There are three rows of choir stalls to either side of the chancel, with a freestanding, matching sedilia. The arch to the organ chamber has a moulded and beaded stone arch springing from attached half-columns with foliate capitals. The church has a full suite of stained glass by Hardman and Co, of various dates in the later C19, filling the windows in the aisles and clerestory, and the tripartite east and west windows. The nave windows depict the Disciples and the Virgin Mary, and those to the clerestory have male saints to the south and female saints to the north. The chancel windows to north and south depict scenes from the life of Christ, and the east window shows Christ in Majesty, flanked by the Virgin Mary and St George, with angels. The circular window high in the west gable end depicts the dove symbolising the Holy Spirit. Below it, the flanking lancets show the Annunciation, the Nativity, the Adoration of the Magi and the Presentation at the Temple. The central light depicts St Cyprian preaching, and also shows his martyrdom. The pews and choir stalls are oak, with carved, foliate finials. At the west end of the nave is a life-size marble sculpture of an angel holding a large scallop shell, carved by S Ruddock; the sculpture is the memorial to Mrs Mary Simms, and doubles as the font. To the west end, under the gallery, are vestries, and the gallery above is reached by a small timber stair. The Horsfall Chapel, to the south, has a plain brick interior, and glass by Hardman and Co depicting the Resurrection and Jesus as The Good Shepherd.

SUBSIDIARY FEATURES: To the south west of the church is a small Sunday School room, built in 1863. It is a single-storey, rectangular building of red brick set on a blue brick plinth, with blue brick cogging and a slate roof. It has pointed-arched doors and diamond-paned, pointed-arched windows, which have blue margin glazing, set under arches picked out in blue brick. The eastern gable end has an inscription stone, dated 1863.

HISTORY: The Hay Mills district takes its name from Hay Mill, which was the mill for Hay House from at least the C14, and was initially a grist mill, though converted to blade grinding in the C17. The buildings, powered by water from the River Cole, continued in this use until 1830, when James Horsfall, a wire drawer from Digbeth whose firm had been founded in the C18, moved to the site. Horsfall demolished the existing mill and constructed new buildings around 100m to the north, including a new mill for wire drawing. In 1853 Horsfall patented a process of heat treatment which produced a high-tensile wire; his company merged that year with that of Joseph Webster of Sutton Coldfield, whose speciality was producing piano wire. The new company of Webster and Horsfall became very successful, making wire for a variety of applications, including the first transatlantic telegraph cable, laid by Brunel's steamship the Great Eastern in 1866. The 30,000 miles of wire had been made by 250 workers at the Hay Mills factory in less than a year. The company has continued on the same site to the present day, though the C19 buildings have been replaced with modern units.

James Horsfall (1813-1877) was a conscientious employer, and in 1860, he provided a school room for the children of workers in his factory, just north of the factory site alongside the River Cole. He also erected a row of cottages along The Fordrough at the same time. The schoolroom was converted to a chapel in 1863, and a new schoolroom constructed just to the south in the same year. The chapel was enlarged in 1869 by the addition of an organ chamber and organ. Horsfall continued to support the church, and a much larger building, incorporating the chapel as its chancel, was designed by Frank Barlow Osborn and begun in 1873. The new church comprised chancel, organ chamber, nave, passage aisles, porch, tower, spire and vestries, and a west gallery; it was partially built over the leat powering the mill. The church opened in 1874. In 1877, the Horsfall mortuary chapel was added to the south of the church in memory of Mary Elizabeth Simms, the daughter of James Horsfall and his wife, Elizabeth, who are also remembered in the chapel. Stained glass was added at various dates through the remainder of the C19, designed by Hardman & Co.

The ecclesiastical parish of St Cyprian was created in 1878, out of part of Yardley parish. In turn its own daughter church of St Chad was built as the suburb continued to grow; St Chad continued in use until 1985 when it was sold. St Cyprian was damaged in enemy action in 1940, but the main damage was to the east wall, which fell out of the building. The church was quickly repaired with only minor losses.

REASONS FOR DESIGNATION:
The Church of St Cyprian at Hay Mills is designated at Grade II, for the following principal reasons:
* The church is a robust and handsome building designed by Frank Barlow Osborn, a recognised mid-Victorian architect in Birmingham, incorporating an earlier schoolroom as the chancel
* The interior has a wealth of decoration, including an impressive hammer-beamed roof to the nave
* It has a good-quality, intact and extensive scheme of stained glass, designed by Hardman & Co
* The church has an interesting history, endowed by the local industrialist James Horsfall, for the benefit of workers at his factory adjacent to the church
* The building is almost completely unaltered since its completion in the 1870s, despite some bomb damage during World War II