A Grade I Listed Building in Bromborough, Wirral 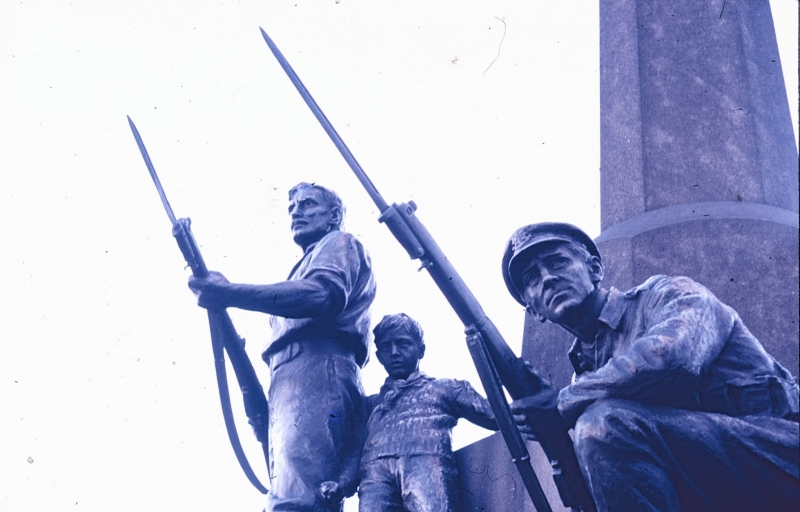 DESCRIPTION: memorial and sculpture by William Goscombe John RA. The memorial was built by Messrs William Kirkpatrick Ltd and the sculpture was cast at the A. B Burton Foundry at Thames Ditton. The memorial stands in the most prominent position in the centre of Port Sunlight village, at the intersection of its two major streets, The Causeway and The Diamond. It consists of a runic granite cross with a chamfered shaft on an octagonal podium with eleven surrounding figures and twelve relief panels. The bronze figural group is clustered around the base of the cross and comprises three soldiers, two women and six children. Four of the round-headed panels have reliefs depicting different services - ambulance men with wounded soldiers, gunners, sailors and anti-aircraft - and on the other eight panels children are depicted holding wreaths or palm leaves. All the figures are depicted larger than life. There are 511 names on the memorial, 117 of these from the Second World War. The theme for the sculpture was ‘Defence of the Realm’ which John expressed in strong narrative detail with the soldiers depicted, guns raised, defending the women and children behind from an impending imaginary invasion, in a powerful and melodramatic tableau. The sculpture makes clear distinctions between the genders and their separate, but equally significant, roles during wartime and powerfully reflects the emotional cost and impact of war on the home front.

The inscription reads THEIR NAMES SHALL LIVE / FOR EVER AND / THEIR GLORY / SHALL NOT BE/ BLOTTED OUT SOUTH PANEL: THESE ARE NOT DEAD / SUCH SPIRITS NEVER DIE / ON THE ADJOINING PANELS ARE INSCRIBED / THE NAMES OF THOSE / FROM THE OFFICES AND WORKS OF / LEVER BROTHERS LIMITED / AND THEIR ASSOCIATED COMPANIES OVERSEAS / AND ALSO FROM PORT SUNLIGHT / WHO LAID DOWN THEIR LIVES IN THE GREAT WAR / 1914 1919 / (NAMES) NORTH PANEL: THIS MEMORIAL / ERECTED BY LEVER BROTHERS LIMITED / AND THE COMPANY'S EMPLOYEES IN ALL / PARTS OF THE BRITISH EMPIRE AND IN / ALLIED COUNTRIES WAS UNVEILED ON / DECEMBER 3RD 1921 BY / SERGEANT E.G. EAMES OF PORT SUNLIGHT / WHO LOST HIS SIGHT AT THE FIRST BATTLE OF THE SOMME IN FRANCE 1916 AND BY PRIVATE R.E. CRUICKSHANK OF THE LONDON / BRANCH OFFICE WHO WAS AWARDED THE / VICTORIA CROSS IN 1918 FOR CONSPICUOUS / BRAVERY AND DEVOTION TO DUTY IN PALESTINE / (NAMES) BASE OF PLINTH - SOUTH SIDE: THE NAMES OF ALL WHO SERVED NUMBERING OVER FOUR THOUSAND AND RECORDED IN A BOOK DEPOSITED BENEATH THIS STONE AND ALSO IN SIMILAR BOOKS IN CHRIST CHURCH AND IN THE LADY LEVER ART GALLERY WALL SURROUNDING CENTRAL PLATFORM: DULCE ET DECORUM EST PRO PATRIA MORI / THEIR NAME SHALL REMAIN FOR EVER AND/THEIR GLORY SHALL NOT BE BLOTTED OUT REVERSE OF WALL: TO OUR GLORIOUS DEAD

Port Sunlight Village was built by Lord Leverhulme, owner of the soap manufacturers Lever Brothers. A philanthropist who strongly believed in providing decent living conditions for his workforce, Leverhulme constructed a factory and a village for the workers to live on land he had bought next to the River Mersey. By 1909, there were 700 houses, a church, school, concert hall and library in the village. Goscombe John had been approached in 1916 by Leverhulme regarding the provision of a memorial for those workers already lost to the war. The two were already well acquainted, as in 1912 John had designed a bust of Lady Lever and in 1915 the effigy for her tomb in the village church. Just over 4,000 Lever employees served in the First World War; by its conclusion over 503 had been killed. Initially, Lever had asserted his desire that all those who had served should be listed on the memorial, but this was obviously not possible, so only the names of those who died are recorded.

John exhibited sketches and maquettes for the memorial at the RA in 1919 and 1920 and his designs were widely praised for their realism and emotive strength. While James Lomax-Simpson, Lever’s official architect, thought the composition too complicated, saying that he would have preferred something 'more symbolic, more monumental', Nicholas Pevsner considered the memorial was, 'genuinely moving and avoids sentimentality'. The final choices about the sculptural group, judging from the drawings and maquettes, were made by Lever himself and members of the Port Sunlight Local Committee. They also agreed that the unveiling should be carried out by an ex-serviceman and after a Committee ballot Sergeant Eames, who had been blinded at the battle of the Somme, and Private Robert Cruickshank, who had been awarded the Victoria Cross for his actions in Palestine, were chosen. The unveiling took place on 3 December 1921.

William Goscombe John (1860-1952) was born in Cardiff, the son of a wood carver. He studied at the South London Technical Art School and the Royal Academy Schools, winning the Gold Medal and Travelling Scholarship. He became a Royal Academician in 1909 and was knighted in the same year. Port Sunlight memorial is his key work of commemoration following the Great War; he was responsible for the architectural elements of the structure as well as the sculpture.

The war memorial, Port Sunlight, unveiled in 1921 is listed at Grade I for the following principal reasons:
* Sculptural interest: as the work of a notable C20 sculptor, Sir W. Goscombe John, R.A., who combined classical architectural composition with high-quality bronze sculpture and relief panels;
* Historic interest: as an eloquent witness to the tragic impacts of world events on this community, and the sacrifices it made in the conflicts of the C20;
* Community value: of significant value as an artistic representation of the paternalistic nature of the Lever Brothers firm;
* Group value: the memorial stands in a prominent place within the wider context of Port Sunlight and has a strong relationship with the buildings and layout of the complex.