A Grade I Listed Building in Sandwich, Kent 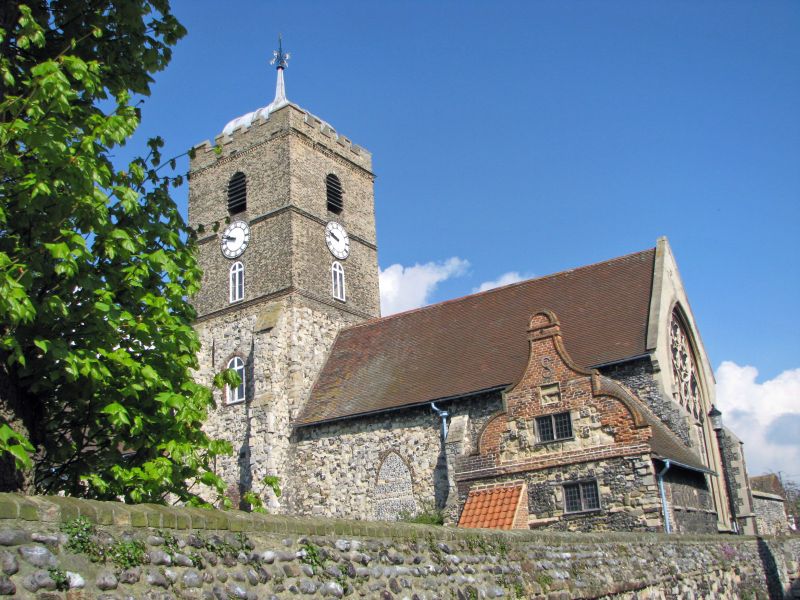 There was a church here by c.1100, and there is late C11 or early C12 fabric at the W end of the nave and in the base of the tower. The church was apparently destroyed by the French in 1216, and rebuilt sometime later in the C13, when the chancel, N and S arcades, N and S chancel chapels and clerestories were built. The vaulted undercroft S of the chancel is also C13. There was considerable work in the C14 when the aisles were widened and the chancel refenestrated. The N porch was added in the C15. The S vestry was renovated in the mid C16, perhaps for use as a chapel by Dutch Protestants. In 1661 the spire and upper part of the tower collapsed, destroying the S aisle. The upper part of the tower was rebuilt in brick, and the S arcade blocked. The church was restored in the C19. Work in 1868 may have been carried out to designs by William White, including a number of new or heavily restored windows. There was some restoration in the C20.

MATERIALS:
A mix of materials, including pebbles, stone rubble with stone dressings, and brick. Tiled roofs.

EXTERIOR
The exterior is notable for the mix of materials and styles, and for the archaeological evidence for former aspects of the building. It has steeply pitched roofs without parapets, except on the tower and N porch. The tall central tower forms an important landmark in Sandwich. The upper two stages of the tower were rebuilt after its collapse in the later C17, and have round-headed lights in a classical style. There is a square domed cupola with pronounced ridges between the sections and an embattled parapet. On the S side of the lower, medieval part of the tower is another late C17 window and the blocked former S tower arch with a blocked C17 window within it. The S sides of both the nave and the chancel also have blocked arches relating to the former S aisle and S chancel chapel. The S nave clerestory is C13 and has pairs of trefoiled lights. The S vestry has a curved, Dutch gable of the mid C16. The vestry undercroft, only partly below ground, is lit by two C13 openings to the N, and there are square, C16 windows in the upper parts. There is a fine C14 E window with Decorated tracery, and the E, W, NE and NW windows of the N aisle are also Decorated in style. The other N aisle windows are probably late C17 or C18, probably having been damaged when the tower collapsed, and have three plain lights with a central transom, all in wood, an unusual survival. The embattled N porch is C15, and covers a C14 N door. The W door is C19 in a Decorated style, and there are clear breaks in the masonry indicating the extent of the damage in the C17.

INTERIOR
The interior is almost entirely empty of furniture, emphasising the size of the space. Traces of a narrower nave can be seen at the W end. The N aisle is very wide, and the three-bay N nave arcade and two-bay N chancel arcade are late C13 and have two chamfered orders on polygonal piers with moulded capitals and bases. The tower arches are of similar character, but are taller. The remains of the S nave arcade and the fragment of the S chapel arcade are like those surviving on the N side. There is no internal division between the N aisle and N chancel chapel. The C13 N clerestory now opens internally. There is an early C16 door to the treasury with a cusped, four-centred head in a square frame, the spandrels with Renaissance cherubs, in the S wall of the chancel. The vault below the treasury is C13, and has a central pier of similar character to the C13 work in the arcades and chamfered vault ribs.

PRINCIPAL FIXTURES
The church, having been largely refurnished in the C19, was stripped of almost all of its furniture when it passed to the CCT. C13 three-seat sedilia in the chancel, with multi-layered, trefoiled arches on detached shafts. Almost entirely rebuilt in the C19, but enough survives to show that something similar once existed. Adjacent trefoiled piscina. There is a small, blocked squint in the back of the sedilia, and another to the N chapel. Royal arms of King Charles II. Roofs are late Medieval in character, and have tall, plain crown posts and lightweight rafters and beams, but they may be later in date due to their scantling and tall crown posts.

The principal fixtures now are monuments. The N aisle has a series of very good late C14 tomb recesses. The central recess has a four-centred ogee opening with cusped and a band of pierced trefoils along the arch. The tomb chest has quatrefoil panels with shields. There are further shields in the surround, which may have been for Thomas Ellis, sometime mayor of Sandwich, d. after 1382. Another recess has a plainer, four centred surround and a tomb chest with trefoiled headed arches. The effigies, of a man and a woman in late C14 civilian dress are very fine, and may belong to John Ellis, merchant, and his wife c.1360-90. Their heads are turned slightly to see the altar. Also in the N aisle is a very fine, but damaged, military effigy, said to be of Sir John Grove, d.1347 although the armour is earlier, which was salvaged from the ruins of the S aisle in the late C18. Some good wall tablets, notably a cartouche with drapes and cherubs for Henry, d.1769 and Mary, d.1772, Wise and their daughter Elizabeth. Also an unusual timber triptych with low relief foliage carving, a memorial for Herbert, d.1915 and Maurice, d. 1916, Day, sons of the then vicar. Ledger slabs and brass indents in the floor.

SUBSIDIARY FEATURES
A walled garden on the S side stands on the site of the former S aisle. A two-light C14 window with geometric tracery from the former St Thomas's Hospital was re-erected in the churchyard in 1923.

HISTORY
Sandwich was one of the Cinque Ports, and was a major port for the wool trade with the Continent in the high middle ages. St Peter's was already a large church by the C12, but wealth brought by the wool trade undoubtedly explains the size and grandeur of the C13 rebuilding of the church, which included not only the N and S aisles, but also the crypt below the SE vestry or treasury, a very unusual feature for a parish church. There was further rebuilding in the C14, and the enlargement of the S aisle is attributed to Sir John Grove, d.1347. The building of the N aisle is undoubtedly related to the patronage of one or more of the people buried in the tombs in the N wall.

The harbour at Sandwich began to silt up in the C15, and the town began to decline, although the rebuilding of the upper part of the so-called treasury in the C16 suggests a degree of continued prosperity. Its Dutch gable is a common feature in Sandwich and is related to the influx of Dutch and Flemish cloth workers. The central tower at St Peter¿s was in poor condition by the mid C17, and on October 13, 1661 it collapsed onto the S aisle. The church was patched up and the upper part of the tower rebuilt in the late C17. By the C19, it was poor condition and some repairs were carried out. The three parish churches of Sandwich were united in 1948, with St Cement's remaining in use for worship. St Peter's was used by Sir Roger Manwood's school as its chapel until 1973. It was vested in the Churches Conservation Trust in 1974.

REASONS FOR DESIGNATION
The church of St Peter, Sandwich is designated at Grade I for the following principal reasons:
* Large church mostly of the C13 with aisles (S demolished after collapse of central tower in C17) and vaulted undercroft to treasury.
* Excellent C14 tombs.
* C16 treasury with brick Dutch gable.
* Unusual C17 lead cupola on tower.