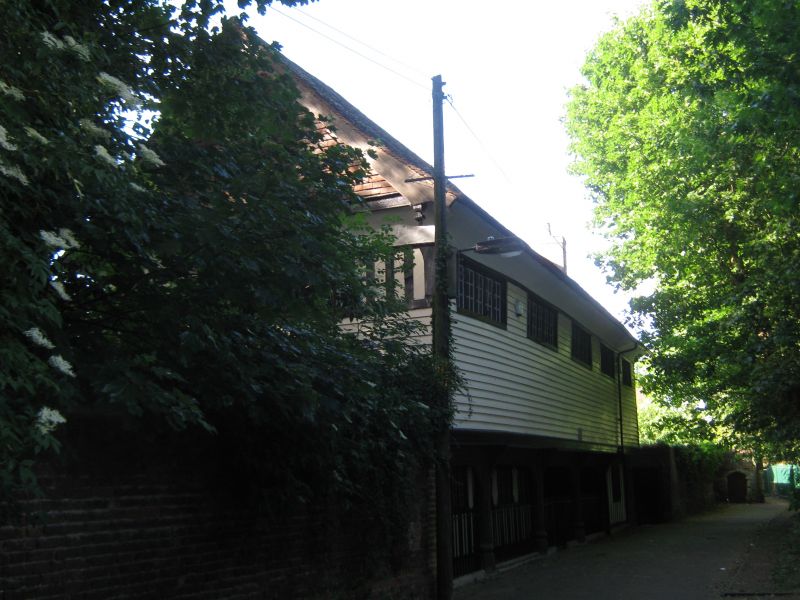 2.
Originally the Free Grammar School, founded in 1527, built in 1587 and
moved to another site in 1879. The construction of the building is
similar to the contemporary Guildhall. It is a timber-framed building
originally standing on an open arcade consisting of 2 rows of 5
octagonal columns supporting heavy beams with brackets attached to
them, the 1st floor overhanging on a bressummer on each side. Only
a small portion of the ground floor at the North end was enclosed with
a timbered wall. The remainder was originally open and used as
a play-ground. Above was the School-room and the Master's Study.
Now the whole of the ground floor has been built in, but it is
recessed, still leaving the columns of the arcade on each side
free. The 1st floor is faced with weather-boarding. On the East
side are 5 modem casement windows, now obscured with black paint.
Tiled roof. At the North and South ends are gables overhanging on
bressummers with cove beneath, also moulded bargeboards which have
recently been renewed, but without their original pendants at apex
and angles. 6-light windows on these fronts with wooden mullions
and transoms. Panelling inside. Photographs in NMR.