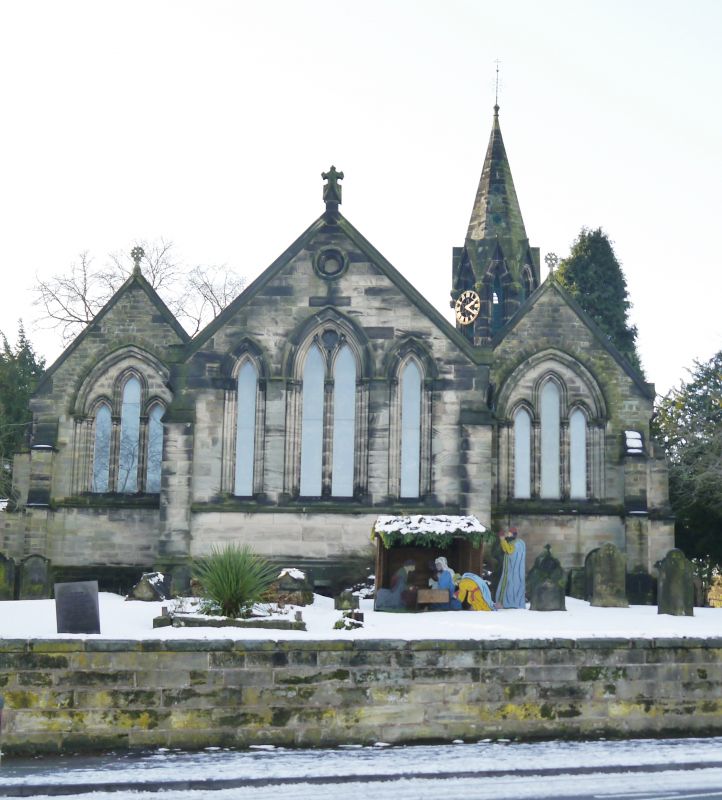 PLAN: Unusual cruciform plan where transepts are offset to the west side, with aisles to their east, north-west tower and spire, south-west vestry, west porch.

EXTERIOR: The church is mainly in the Early English style. The chancel has a 2-light geometrical east window flanked by single lancets, with lancets in north and south walls. Aisles have 3 stepped lancets to east windows, each with shafts and beneath a super arch, and 2 lancets in north and south walls. Transepts have clasping buttresses, 2-light north and south windows, and the north transept has a west lancet. The narrow north-west tower houses the gallery stair, and has a pointed doorway and narrow stair light. The upper stage is dated 1887 at the base, above which it turns octagonal and has lancets under gables, which have large sculpted head stops, below a stone spire. The nave west window is similar to the east window, above an added timber-framed porch. It has glazed side panels and above its entrance are inscription bands and cusped barge boards. The nave west doorway is dated 1837 in the tympanum. The vestry has lancet windows and trefoil-headed doorway.

INTERIOR: Although they are of different dates, Scott gave the transepts and arcades a unified internal design of arches on corbelled responds, and with octagonal piers in the arcades. All have hoodmoulds with foliage stops. Chancel windows have rere arches, of which the east is richer, with ringed marble shafts and stiff-leaf impost band. Nave and chancel have a single 6-bay queen-post roof of 1837, which has pendants, a moulded cornice, purlins and ridge, and incorporates X-shaped panels over the sanctuary. Transepts have similar 2-bay roofs and aisles have keeled cradle roofs. Walls are plastered. The floor is red and black tiles, with floorboards beneath the pews.

PRINCIPAL FIXTURES: The chancel north and south walls have sgraffito work by Heywood Sumner of 1897 (which originally continued across the east wall), showing archangels in the spandrels, linked by foliage trails: these resemble continental work in the Jugendstil manner, and are an unusual feature for England. A raked west gallery of 1837 is on two posts and has an elaborate open trefoil-arcaded front. Its benches were removed in 1878, to be replaced by the organ. Division between nave and chancel is marked by a painted stone screen base of trefoil arches similar to the gallery. The font (c1878) has a square bowl with trefoil arcading, on a marble stem with detached corner shafts. The pews have ends with moulded edges and arm rests, and open-panel backs, and from a consistent series in keeping with the rest of the interior. The richly detailed Gothic pulpit is c1895. Choir stalls have frontals with open arcading, and moulded ends, amd match the pews. The communion rail has octagonal balusters, probably of 1878. The painted wooden reredos of 1884 showing the crucifixion and angels is by Burlison & Grylls. Stained glass is by Ward & Hughes and Burlison & Grylls, including: archangels in chancel north and south windows by Ward and Hughes (1882), who also made the east window showing scenes from the life of Christ (1878); north-aisle east window of the Good Shepherd by Burlison & Grylls (1878).

HISTORY: Built in 1837 by Thomas Trubshaw (1802-1842), architect of Haywood, who designed a cruciform plan in which the transepts were placed near the west rather than the east end. The interior was furnished with box pews, shown in a painting of c1857, and a west gallery. An engraving dated 1841 shows a north-west tower and spire very similar to the present arrangement. Its enlargement in 1878 was one of the last works undertaken by Sir George Gilbert Scott (1811-78), the most prolific Gothic-Revival architect of the C19. He rebuilt the transept arches and added aisles on the east sides of the transepts. The upper part of the tower and spire were rebuilt in 1887 by his son John Oldrid Scott (1841-1913). A west porch was added in the late C19 and the south-west vestry was added in 1894 (date on building). A church hall was built in 1977 by Wood, Goldstraw & Yorath, which is linked to the vestry by covered walkway, and not of special interest.

REASONS FOR DESIGNATION: The Church of St Michael, Brereton, is designated at Grade II for the following principal reasons:

* The church combines early and high Victorian phases, to produce an ensemble of considerable architectural interest.
* The fixtures forma cohesive scheme of the later C19, and display intrinsic design interest.
* The Heywood Sumner sgraffito work is particularly notable.
* This was among the final works of Sir George Gilbert Scott, and his son John Oldrid Scott did further work here.