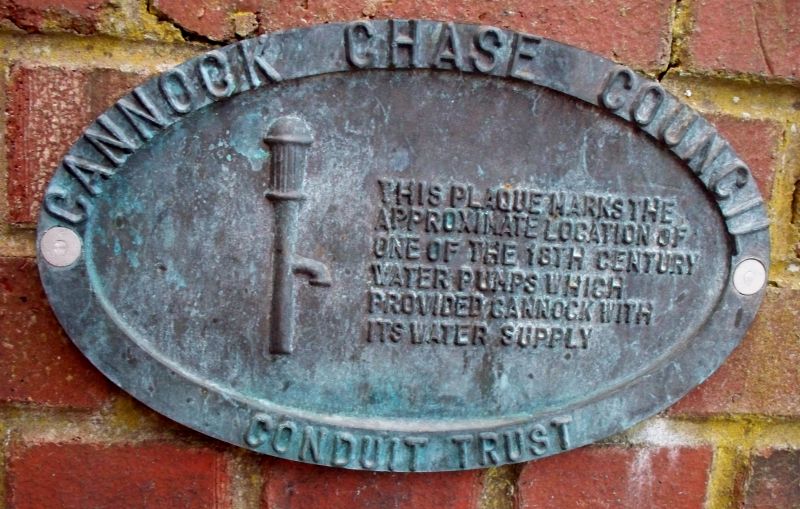 A conduit head, dating from 1736; the costs met by public subscription.

A conduit head, dating from 1736; the costs met by subscription.

MATERIALS: constructed of sandstone ashlar with a stone-flagged pyramidal roof surmounted by a ball finial.

EXTERIOR: the building stands two storeys high and has a low sandstone plinth. There are two rectangular openings in the south-east elevation. To the ground floor is a low doorway which is blocked with sandstone blocks, and the opening above has a wooden shutter. An inscribed plaque (added in 1950) on the south-west side of the building reads: Cannock Conduit Trust / founded 1736 / By Public Subscription for bringing a water / supply to the Township of Cannock. / This building was erected in the year 1736 / as the Conduit Head for the water / brought by pipe from Stringer’s Meadow / Rumer Hill Leacroft. The source of / water being given by Dr. William Byrche / of Leacroft Hall. The undertaking was / endowed by the Lord of the Manor the / Earl of Uxbridge, the Lord Bishop of Worcester / Sir Robert Fisher and others and later became / a registered Charity and served the Township / of Cannock for over 200 years.

SUBSIDIARY FEATURE: a cast-iron water pump stands adjacent to the conduit head and was re-located here from elsewhere in the town in the early C21. It is not included in the listing.

The Cannock Conduit Trust was established in 1736 to provide a constant supply of clean water to the town which had previously suffered water shortages during the summer months. Pipes were laid from a spring in Stringer's Meadow in Leacroft, south-east of Cannock, to carry water some three kilometres to a stone conduit head or house which was erected in High Green in the centre of the town. The costs were met by public subscriptions. From here the water was distributed to pumps around the town, and by 1864 there were six pumps. Following the introduction of the conduit system, the quality of Cannock’s water was said to be second only to that of Malvern. Despite the establishment of the South Staffordshire Waterworks Company in 1853, which led to an improved water supply to the town, the Trust continued to supply water until 1942 when mining subsidence meant that piping became impossible. A plaque recording the origins of the conduit system was added to the conduit head in 1950. The building was restored in 1984 and 2000.

The conduit head in Cannock is listed at Grade II for the following principal reasons:

* Architectural interest: as a well-preserved mid-C18 conduit head, notable for its classical design;
* Historic interest: as a testament to the provision of a safe and comprehensive municipal water supply;
* Group value: it forms a group with other listed buildings including the Council House (Grade II*), the gates and railings (Grade II) to the Council House, and several Grade II listed buildings on the opposite side of High Green.