Numbers 18, 19 and 20 and Attached Railings and Retaining Wall to Park Tunnel 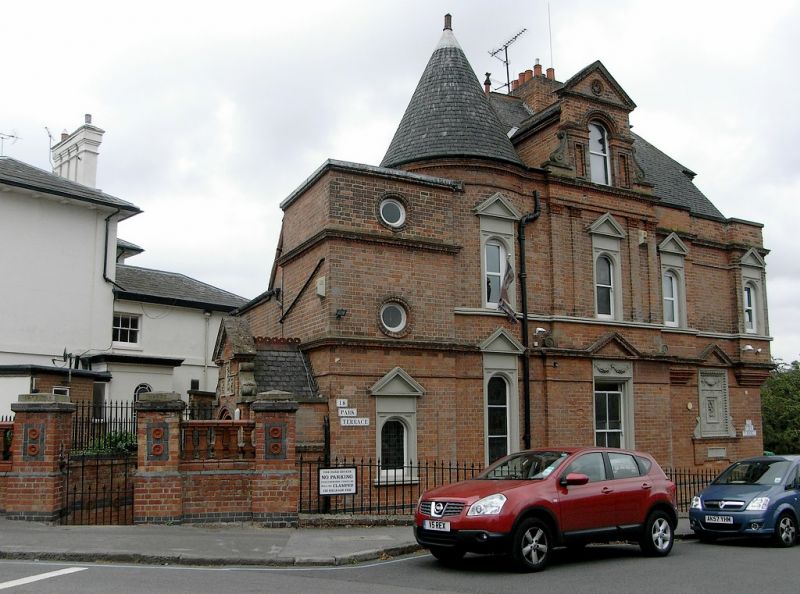 Entry Name: Numbers 18, 19 and 20 and Attached Railings and Retaining Wall to Park Tunnel

House, now 3 houses, and attached railings and retaining wall
to Park Tunnel. House dated 1881, tunnel retaining wall 1856,
both by TC Hine of Nottingham. Altered late C19 and late C20.
House, red brick with ashlar dressings and hipped slate roofs
with a truncated central ridge stack. Renaissance Revival
style.
EXTERIOR: plinth, first floor band, second floor sill band,
eaves cornice, coped parapet. Windows are mainly original
plain sashes, those on the Park front mainly round-headed,
with moulded brick surrounds.
2 storeys plus basement and attics; 4 window range. The house
stands on the cliff above the tunnel entrance, and its lower
storeys are integral with the retaining wall. The entrance is
at ground floor level on Park Terrace.
Park side, to south, has to left a projecting square bay,
single storey plus basement. Elliptical arched basement
opening, and above it a similar smaller opening with traceried
balustrade. Above again, a balustraded balcony. To left, a
taller octagonal corner tower with spire roof. To right, a bay
with single windows and a gabled dormer, then a bay with a
wooden balcony, 2 bays, with hipped roof.
West end has a triangular bay window, 2 storeys, with plain
sashes under pediments, one altered to a door. Above, a niche
flanked by similar windows and pediments. Above again, a
half-hipped roof with a gabled dormer, single light, flanked
by roundels. To left, a round window, and above it, an oriel
window set across the corner.
Street front, to north, has a slightly projecting bay with a
window on each floor and a shouldered dormer. To left, a
window, and to right an inscribed datestone. Above, on each
side, a single window. All these openings have pediments.
To left, a square projection, 3 storeys, with a pedimented
window and above, a roundel on each floor. Left return has a
pedimented brick porch with round-arched doorway.
Outside, to left, 4 square panelled gate piers, restored 1981,
with stone caps. Central gateway flanked by terracotta
balustrades. To left, a gate pier in the same style, late C20,
with gate. To right, a wrought-iron spearhead railing across
the street front. Beyond, a short railing with steps and
central gateway to side entrance. Beyond again, a short plain
railing, then the semicircular retaining wall to the tunnel,
rock-faced stone with chamfered ashlar coping.
HISTORICAL NOTE: the Park Tunnel (qv), begun in 1844 and
completed by Hine in 1856, was intended as a formal entrance
to the Park. This house and the tunnel are both major
contributions by Hine to the development of the Park, which
was carried out by the 4th and 5th Dukes of Newcastle.
(Get to know Nottingham: Brand K: The Park estate, Nottingham:
Nottingham: 1984-: 16,29; Get to know Nottingham: Brand K:
Thomas Chambers Hine ; an architect of Victorian Nottingham:
Nottingham: 14, 16).