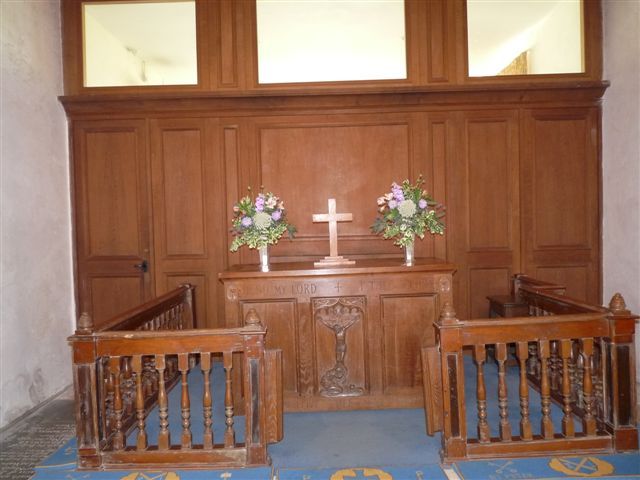 ST4614 CHISELBOROUGH CP CHURCH LANE (North side)
11/70 Church of St Peter and St Paul
19.4.61
GV II*
Anglican parish church. C12 origins, chancel C17, nave rebuilt by E L Bracebridge 1842. Ham stone coursed rubble to
tower, cut and squared to chancel, and ashlar to nave, with ashlar dressings; Welsh slate roofs between coped gables.
Three-cell plan of 2-bay chancel, central tower with spire, and 5-bay nave, with matching north and south porches.
Chancel has plain plinth, double on north and east walls, no buttresses; east window a 4-light chamfered mullioned
window, flat headed without label; level with head of window are two carved-head corbels, possibly C12, and possibly
C15 cinquefoil vent, now blocked, to head of gable; north side quite plain, south wall has another 4-light chamfered
mullioned window in chamfered recess, no label, to eastern bay, and to west a moulded flat-arched doorway, now blocked.
Tower square, 2 stages; on south side a C19 segmental arched doorway set into projection with 2 offsets between the
nave and a square plan stair turret, and above 2 lancet windows, one plain with pierced stone baffle, and the higher
with moulded arch and jambs, fitted with lourvres; low simple parapet with moulded string with corner gargoyles and
plain coping; the north side similar, but with a moulded C19 lancet window at lower level; to east and west sides only
the upper lancets show, that to the east moulded with louvres, to west chamfered with pierced stone baffle; crowning
the tower a short octagonal spire with carved centreband, the edge ribs markedly curve-tapered, finial with weathervane
- this spire not mentioned in an 1822 description. Nave has plinth, shallow buttresses to corners and each bay, corbel
table to eaves; long plain lancet windows with foliage stops to arched labels; west gable has group of 3 lancets, the
centre taller, with moulded surround and shared label, with small lancet to match at head of gable. North and south
porches matching with moulded pointed arched outer doorways, small lancets in east and west walls; similar inner
arches. Interior concentrates on nave and under tower space: chancel has false ceiling fitted, and the eastern section
partitioned off to form vestry by mid C20 screen; the altar rails probably of 1842. The crossing has 3 low C13
chamfered double order arches to chancel and sides, the nave arch higher and semi circular, being reconstructed in 1911
using fragments of C12 work found buried in the walls; the crossing has a simple star vault on moulded corbels. Nave
all C19, but with inserted C20 ceiling. Few fittings of note, but the font may be C15, octagonal with carved panels to
bowl, simple shaft. Some C17 memorial slabs in floor, and 2 pieces of armorial glass in west window possibly earlier
than C19. (Pevsner, Buildings of England, South and West Somerset, 1958; Greenwood C and J, Somerset Delineated,
1822).