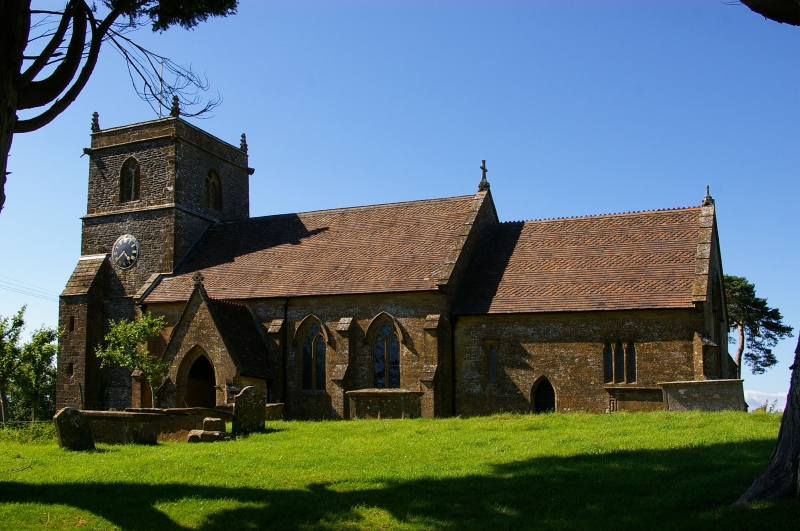 Church. Early foundation, rebuilt 1123 with much C15 and C19 work (1864). Ham stone, cut and squared rubble with
ashlar dressings; plain clay tiles with bands of fish-scale tiles between coped gables, ornamental ridge to chancel;
lead roof to North aisle, and single bay North Chapel/Organ chamber, with South porch and West Tower. Chancel largely
rebuilt in 1864, with plinth, angled corner buttresses; C14 type tracery to 3-light East window; on South wall a C13
style group of 3 cusped lancets, and a C16 style single light under square label, and between them a plain arched
doorway. North chapel in C14 style, but a C19 rebuild, with 3-light traceried North window and 2-light traceried East
window. North aisle has offset buttresses marking each bay, with cusped lancets between them, and C14 style traceried
2-light window in West wall, matching those to South wall of nave which are also set between offset buttresses. The
South porch of C19, in C15 style. Tower probably of 1123, in three stages, with plinth and string courses marking each
stage, plain parapet with small gargoyles and pinnacles to each corner; no buttresses, but square plan stair turret for
stage-and-a-half on West end of South face: Stage 1 has plain moulded pointed arched West door, and above a 3-light C15
traceried window set in hollowed recess; on stage-2 clock faces to South and West faces; stage-3 has 2-light simple C15
tracerled windows set in hollowed recesses, one to each face; that to North side has reticulated tracery but may not be
earlier; ornamented pierced stone baffles to each window; roof a shallow pyramid with stone slates and stone ridges.
Internally all of the work is C19, even the convincing C12 style North Chapel arch, which was carved by Revd, J.
Hancock, curate of nearby Haselbury. Surviving features include circular font of possibly 1123, with cable mould
around waisted base and lozenge ornamental band below rim; good C16 alter table with bulbens legs; wood pulpit of early
C17, and 3-panel parish chest of C17. The clock mechanism no later than 1707, 6 bills in tower, 3 from the Purdue
(Closworth) foundry, one dated 1591 and three of C17, one C18 and one C20.