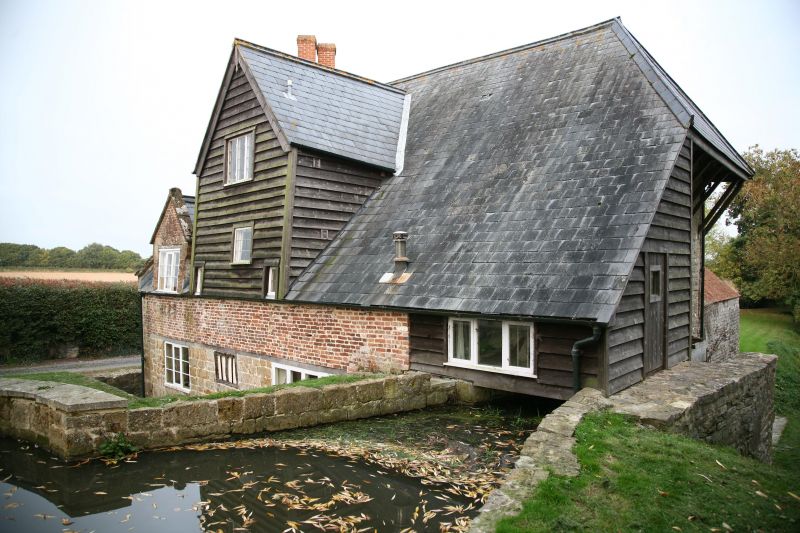 Water mill and mill house. Later C17. Ham stone near-ashlar with some brickwork; Welsh slate roof with tall coped gable
to east, hipped to west; with heavy brick chimney stack on stone base. Two storeys with attic, south-east elevation 4
bays. String bands between floors; to bay 1 a 3-light casement below, and external iron drive-wheel above; to bay 2 are
3-light casements, formerly leaded, with attic window in gable having one light blocked set under square label; 3-light
windows bay 4; casements damaged, and some covered over - they were mullioned and transomed with mostly ovolo
mouldings: to lower bay 3 a boarded door in heavy frame under timber lintol, above which is a square stone plaque with
moulded frame having unworked top mitres; above all windows are brickwork panels with semi-circular arched recesses
under relieving arches. On west gable the hipped roof is cantilevered out on timber brackets, and under it the remains
of the cast-iron water wheel, about 3 metres diameter, undershot pattern, and above a 3-light transomed and a 2-light
attic window, with a small extension added north of the wheel. The east gable has a single-storey lean-to, above which
are 2 two-light casements with semi-circular brick panels over which incorporate either vent holes or apertures for
pigeons. The north elevation has a catslide roof with 2 gables and further casement windows, all formerly leaded. Most
of the machinery survives, and some may be pre-C19, but the wheel, by Edward Peace of Taunton, is part of an 1851
remodelling, at which tide parts of the gable wall appear to have been rebuilt. Interior currently not easily
accessible, but reported are three domestic roods on ground floor level, one with cross-corner fireplace and another
with inserted copper/wash boiler, the third had a large fireplace, with an oven now removed: on first floor two
domestic roods at east end, the larger with fireplace, with stud and panel partitioning: the attic rood was formerly
connected to the house, rather than the mill. A detailed report suggests that the mill may have been for occasional
estate use rather than general commercial purposes, and that the miller may have had a second occupation, such as
weaving. The building neglected and subjected to some vandalism, December 1985: it is of importance on account of the
brickwork, early for Somerset where pre-1700 examples are rare and for the machinery which is rudimentary and appears
to incorporate pre C19 elements. (VAG Reports, SRO unpublished, December 1979 and September 1982).