A Grade I Listed Building in Barrington, Somerset 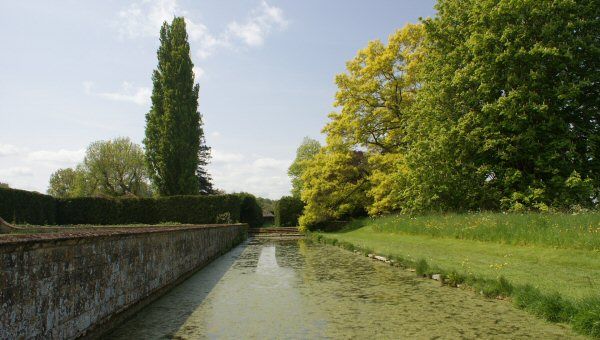 Manor house. Circa 1514 for Henry Daubeney, perhaps finished as late as c1558 for William Clifton. Interior virtually
gutted c1825, restored 1921-25 by Forbes and Tate for A.A. Lyle having passed to the National Trust in 1908. Ham stone
with stone-tiled roofs. E-plan, rain elevation to the south-east, main range containing hall and buttery divided by a
screens-passage, long projecting wings with staircases in square turrets in the angles, central porch; the plan is
slightly offset, screens-passage and entrances not on central axis, some difference in floor levels; long gallery to
attic; interior much replanned and refitted 1921-25; in style native Gothic combined with French Rennaissence features.
South-east elevation of 2 storeys and attic, 1:1:1:2:1 bays, 2, 3, 4, and 5-light stone-mullioned windows, the majority
to the ground and first floor transomed, 4-centred heads to lights, square- paned leaded lights, stopped labels. Outer
wings and porch with diagonal buttresses which ascend to twisted finials, scalework caps with crocketed finials, attic
gables to bays each side of porch and stair-turrets with similar finials, further finials at the apex of each gable;
the skyline complemented by off-ridge tall twisted chimneys with crenellated caps, singly and in two's. Four-storeyed
central porch, 3-light window in the gable face, moulded 4- centred arch outer door opening, inner door opening with a
panelled door. Returns in similar elaborate style, stacks project with offsets. The principal entrance has to the rear,
created by Forbes and Tate; 2:1:3:2:1 bays, 3 and 4-light stone-mullioned windows, 6 transomed, flanking the central
doorway projecting chimney-breasts, to left garderobe flues; doorway reached by straight-flight of stone steps.
Interior with only the studding of the screens gallery in the hall surviving from the original house. Two early C17
overmantels survive on the first floor, one the Judgment of Solomon, the other in painted freestone with flanking
coluans and strapwork ornament.Kitchen with passive stone lintel in the east wing. Virtually all the other fittings in
the house cone from the collection of A.A. Lyle and were incorporated by Forbes and Tate, further work to their designs
including several good staircases. The reused fittings date from the C16, C17 and C18 including panelling, staicase,
panelled ceilings, doors and chimneypieces. Adjacent to the house a wing by Forbes and Tate adopted from a C17/C18
stable block; further service buildings (qv). (Country Life, September 17, 1908; November 7, 1925; March 17, 1928;
March 24, 1928; September 8, 1928; September 9, 1949; July 28, 1960; VCH, Vol IV, 1978; Pevsner N., Buildings of
England, South and West Somerset, 1958; Ellison A., Medieval Villages of South East Somerset).