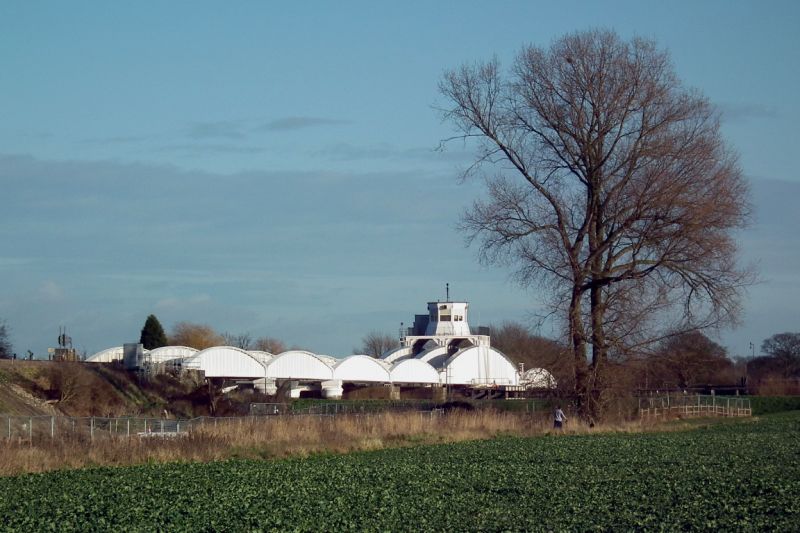 Railway swing bridge. 1869. Designed by Thomas E Harrison and constructed
by Butler and Pitts of Stanningley (fixed spans) and W G Armstrong and Co of
Newcastle upon Tyne (swing span), for the North Eastern Railway
Company. C20 alterations, including steel replacement starlings. Wrought-
iron girders; cast-iron piers filled with cement, timber starlings and
control cabin; abutments of red brick in English bond with sandstone ashlar
dressings. Abutments have coved ashlar cornices and blocking courses. 6
spans, each of 3 hogback plate girders (the central girder between the twin
railway tracks): 5 fixed spans of approximately 35 metres each, one to the
east end and 4 to the west, and a swing span approximately 76 metres long,
pivoted in the centre. The swing span turns on 36 rollers on a 9 metre
diameter race enclosed in a 15 metre diameter pier supported on 7 columns,
within a large timber starling, now fragmentary, with plank decking. The
fixed spans are carried on sets of 3 column piers with plain bell-shaped
Egyptian-style lotus flower capitals; the third and fourth piers from the
east have lower sections enclosed in C20 sheet steel starlings, and the
eastern piers have been thickened and enclosed within a later C19-C20
timber starling with plank decking. Both timber starlings were being
replaced with steel at time of resurvey. The swing span carries an iron
staircase on the north side, and a square platform on top with a cast-iron
balustrade and central octagonal cabin with 16-pane windows to 7
sides, coved cornice and flat roof with wire stays to a central finial.
Sides of bridge with walls of plate girders. Originally operated by
hydraulic motors, now electrically powered; the motors are housed in boxes
beside the control cabin. Carries the main Doncaster-Hull line. Probably the
finest example of its kind in Britain, and said to be the second largest
railway swing bridge in the world when built. Still in active use. This
bridge is also in Kilpin parish. M F Barbey, Civil Engineering Heritage:
Northern England, 1981, pp 97-9.