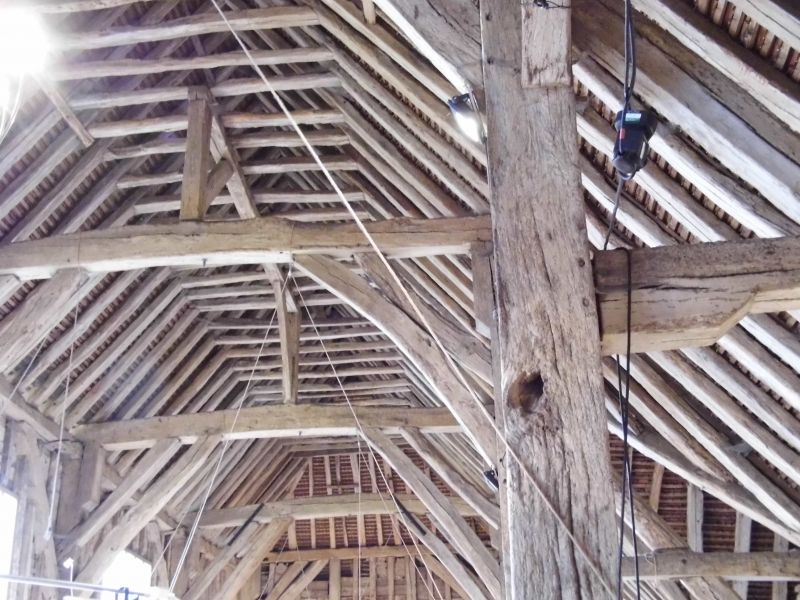 Monastic Barn. 1390s, with C19 extensions and infilling to NE wall. Built by Abbot John Moot to store produce of grange at Kingsbury for St Albans Abbey.
Timber-framed with weatherboard cladding. Flint plinth with padstones and re-used pieces of brick and tile, the NE brick plinth constructed C19. Plain tile hipped roof.
An impressively large barn of 5 bays, with aisle and central porch projection along SW side. NE aisle has been removed but one corner post survives in wall of link to attached C19 building, and the original arcade also remains, now infilled with C19 studs and weatherboarding.
Arcade posts have hoisting notches and braces to tiebeams and arcade plates. Passing braces provide double-bracing from aisle posts to tiebeams. Intact common rafter roof, the collars of the central bay supported by a collar purlin which is braced onto plain crown posts at either end. End bays are hipped. End walls retain original studs for large panels, and have braced mid rails. Some original studding in wall of SW aisle. Aisle also has low flint and brick spur walls between bays. Porch projection has dragon ties, inserted loft, and gable with dovecote holes in C19 weatherboarding. Other C19 doors and shuttered openings in NE wall.
To either side of porch there are early-mid C19 lean-to extensions with slate roofs: extensions to left have altered C20 brick and weatherboard walling; extensions to right are weatherboarded and retain C19 stable partitions and drinking troughs. SE end has similar stable extension but under plain tile roof swept down from main hip. Part of this extension has been altered to provide a passage through to the barn, and a link to an attached C19 brick range. This C19 brick range is not of special interest but the link is, in that it retains the corner post of the NE aisle.
At the NW end of the barn is another C19 lean-to extension. The attached C20 concrete ramp and silos are not of special interest.
An imposing medieval barn, its timber frame intact apart from the removal of the NE aisle. The passing braces and the use of crown posts only in the centre bay are of particular interest. Modifications and extensions to the barn demonstrate its continued use as a farm building, first for the Abbey, then for Kingsbury Manor.