A Grade I Listed Building in Hunsdon, Hertfordshire 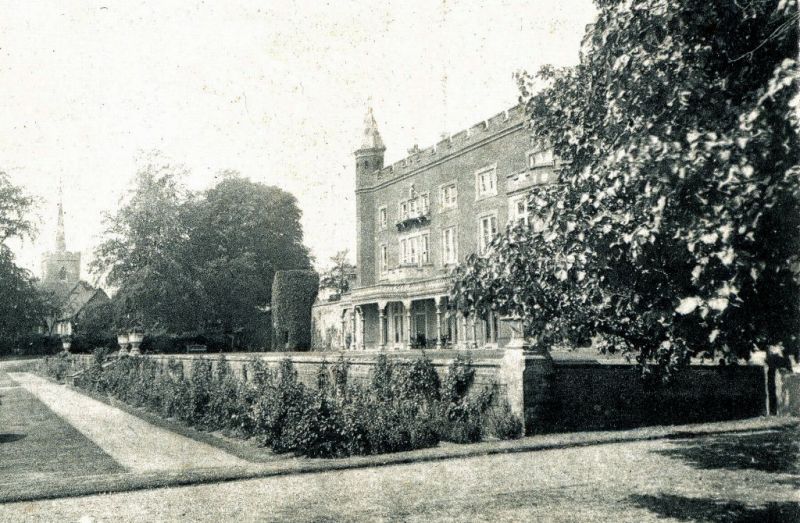 Country House. Mid C15 moated brick tower house of Sir William
Oldhall; altered 1527-34 for Henry VIII; altered and extended
to W by Carey family in first half of C17; W parts demolished by
Josias Nicolson c1745 and moat filled in c1788; raised and
extensively rebuilt, and replanned with main entrance at E, by
Nicolson Calvert 1805-11 in castellated form; interior
remodelled, windows altered and elaborate cast iron verandah
added on S c1861 for James Wylie. A large rectangular red brick
block, of 3 storeys and cellars, with low 2 storeys service wing
extending to W looking into a walled yard with 2 storeys
crenellated NW gate house and octagonal 2 storeys SW tower. The
main block has 2 parallel hipped slate roofs concealed behind an
embattled parapet, and large, pointed, diagonal buttresses at
each corner. The broad, projecting, 3 storeys, E porch appears
to have had similar buttresses removed. A square, brick, stair-
turret projects in the angle on the N side and runs up above the
parapet. The exterior of the block has been refaced extensively
but at the W end, and on the return on the N wall up to a
rectangular bay, the old brickwork has been only disguised by red
mortar tuck-pointed in white, which has weathered to reveal the
old walls. These are characterised by a broad stone string at
1st floor level, diapering in black headers above this, tall
stone arrow-slits often set at the angle of the buttress and
wall, and small square stone windows, now blocked. The present
large windows have presumably obliterated others. The top storey
and parapet above a hollow moulded string course are later
additions. The stone arrow-slits have ogee-cusped expansions at
top, bottom and half-height. They are copied elsewhere around
the building using brick for the plain vertical jambs. The
present C19 windows have plaster surrounds and 2-light or 3-light
moulded wooden mullioned and transomed windows. Of the oldest
period are the cellars under the E parts, notably 1 with a lofty
pointed arched brick vault covering 48'6" by 18'6" lying N-S with
a doorway into the base of an octagonal garderobe shaft
Elsewhere are brick masses presumably to support the 100' great
tower of Oldhall's house described by William of Worcester in
1478 (Itineraries ed and trans J H Harvey (1969) Oxford). The
very high Ground floor rooms have fine Classical interiors of the
later C19 with modelled plaster ceilings, cornices and friezes,
moulded woodwork, and marble fire surrounds. A heavy, triple
arched, 2 storeys screen of marbled columns with astylar caps
gives onto the stairwell. Chimneypiece in dining room dated
1882. Lintel built into garden gateway to W inscribed 'HH 1593'.
S side of octagonal SW tower a summerhouse with pointed arched
openings. A house of the greatest historical interest (Pevsner
(1977) 210). It incorporates fragmentary remains of 1 of the
most important medieval houses in the county, the architectural
history of which has recently been traced by the RCHM
(Typescript). A royal residence with extensive parks for
hunting, forming the centre of the honour of Hunsdon from 1532
and associated with all the Tudor monarchs from Henry VIII until
Elizabeth granted it to her cousin Sir Henry Carey, Lord Hunsdon
in 1558/9. The house has a suite of C19 interiors of special
interest. It forms a picturesque historic group with the parish
church. (RCHM (1911) 128: VCH (1912) 324-5: Kelly (1914 166-
7: Pevsner (1977) 210: HLHS (1979) 9-12, 40-1: RCHM
(Typescript).