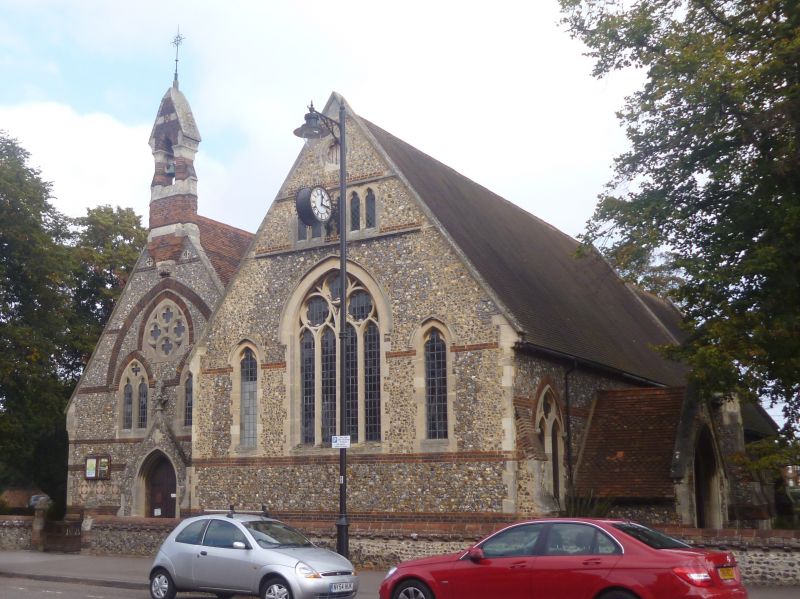 MATERIALS: Flint-faced with brick and limestone dressings. Clay tile roofs. The roofs of the 1860s church and the S porch have alternating bands of plain and lobed tiles.

EXTERIOR: Holy Trinity church consists of two distinct parts. The 1860s church was greatly expanded by the addition of a new, larger and rather plainer nave and chancel to the S in the 1880s, although generally in keeping with the 1860s fabric. The old church is a vibrant, vigorous essay in High Victorian Gothic, typical of the work at that time of its designer, the young Arthur Blomfield. The W front, facing the High Street, makes much use of the contrasted colour, textures and shapes in the flint walling, red-brick banding and super-arch, and the freestone of the window tracery. There is has a gabled W doorway, the apex of which is flanked by a pair of two-light windows with quatrefoils in their heads. Placed between these and under a superordinate flush brick arch is a spherical triangle window containing four quatrefoils. Partly occupying the gable head of the W wall and partly rising above it is the brick and stonework of a single-light bellcote of angular appearance and with a `waist' in the area of the bell-opening. The N wall has two-light windows with quatrefoils in the heads and the E window is of five lights with a complex series of foils circles in the tracery. The 1880s addition is longer at both ends than the original church and is also wider: it is under its own gable roofs. It too has brick banding but this is less conspicuously applied than on the 1861 work. The W front has a large Geometrical W window of four lights with three circles in the head: this window is flanked by a pair of trefoil-headed single lights. The two-light windows in the nave are no doubt reset from the earlier building. The E window is an unusual design of five lights with the central one rising sheer to the head of the arch. At the W end of the 1880s nave is a clock projecting at right angles to the wall surface.

INTERIOR: The worship area of the building now consists of the 1880s nave and chancel, the old part of the building having been partitioned off behind the arcade for a parish room, toilets, offices etc in the late C20. The walls are plastered and whitened except in the chancel where bare brick is exposed. The arcade is of five bays with red brick and stone polychrome arches under a moulded hood. The circular piers are quite slender and have moulded capitals and bases, the latter on high plinths. The chancel arch is also polychromatic and rises from corbels. The nave roof has arch braces to a collar which carries a crown-posts and struts, and is horizontally boarded. The chancel has semi-circular trusses which are doubled to mark the junction of the choir and sanctuary. The floor of the old and new naves is covered with wooden parquet flooring of the late C20. The present chancel floor has tiling. The sanctuary roof of the old chancel has attractive but much darkened painted decoration while the wall plate of the old church bears painted texts. The old church has been screened off from the 1880s part by late C20 utilitarian partitioning.

PRINCIPAL FIXTURES: There are a number of fittings of interest. The reredos has a central gabled niche and three trefoiled arches either side of it. The openings have detached grey marble shafts and have plain backs of green and red marble slabs. The pews are movable and have shaped ends with a vigorous and unusual profile involving small elbows and with large quatrefoil piercings. The chancel stalls and desks have pierced fronts and probably date from the 1880s. The four-sided wooden pulpit of 1891, on a stone base, also has pierced panels. The octagonal font is unusually small and is octagonal with two rows of medallion and zig-zag ornament on the bowl, and a stylised foliage-covered neck between it and the base. At the W end there is a late C19 clock and cased-in clock mechanism which is linked to the external clock face. The E window has stained glass (date of death 1884).

SUBSIDIARY FEATURES: At the W and SW entrances to the churchyard are robust brick and stone gate piers, no doubt dating from the 1860s build.

HISTORY: Population growth in mid-C19 Stevenage was largely at some remove from the parish church of St Nicholas. Where it had taken place, an application for funds noted, `Many who frequent the Baptist Chapel there would gladly go to a church if there were one near them' (ICBS 5714). It continued: `An excellent site for the church at the South end of the town is offered by a Lady who also contributed to the funds.' Holy Trinity therefore became a chapel-of-ease to the parish church, where the rector was Canon George Blomfield. His brother, Charles, was bishop of London (bishop 1828-56) and also lord of the manor of Stevenage and it is said (in contradiction to the quotation above) that it was he who gave the land for the new church. This was designed by Arthur William Blomfield (1829-99), the fourth son of Bishop Blomfield, and who was to become one of the most successful and prolific of Victorian church architects. The design appears to have been in place in 1860 for Holy Trinity and the contract was let on 14 October 1861 for £1,127 (the total including the perimeter walls and architect's fees being estimated at £1,346). The church was built on what was described as `a vacant plot of ground...[beside] the Great North Road' and the consecration took place on 23 April 1862. The church had 208 seats, 200 of them free.

Blomfield had been articled to P C Hardwick and began independent practice in 1856 in London. He became diocesan architect to Winchester, hence a large number of church-building commissions throughout the diocese. He was also architect to the Bank of England from 1883. Blomfield was knighted in 1889 and was awarded the RIBA's Royal Gold Medal in 1891. His early work is characterised by a strong muscular quality and the use of structural polychrome often with continental influences. Pevsner and Cherry comment acerbically, but with a great deal of justice, that Holy Trinity is `an early church of his, before his style became smooth and competent and stale.'

By the 1880s the church was `very much too small...[and] people are frequently turned away from the Evening Service for want of room' (ICBS 8504). Curiously Arthur Blomfield did not design the extension, the choice falling, for reasons that are unclear, on the little-known Tate and Popplewell of Manchester. Their only other buildings having a mention in the Pevsner Architectural Guides series are all in the north-west: the Hartley Victoria College, Whalley Range, Manchester (a training college for Primitive Methodist ministers), 1878-9, St Mark, Miles Platting, Manchester, 1884 (probably demolished); and St Peter, Hale, Cheshire, 1890-2. Yet, strangely, Blomfield was consulted, for it was said the plan had `the entire approval of the original Architect, Mr. Arthur Blomfield, who most kindly came down to Stevenage to confer with Mr. Tate as to the best practicable scheme.' Although designed together, the nave and chancel were built separately in 1881-2 and 1885 respectively, with the chancel being consecrated on 6 November 1885

REASONS FOR DESIGNATION:
Holy Trinity church, Stevenage is designated at Grade II for the following principal reasons:
* It is a vigorous High Victorian church by a well-known church architect and which was extended in a sympathetic style in the 1880s.
* It contains a number of fixtures of interest.