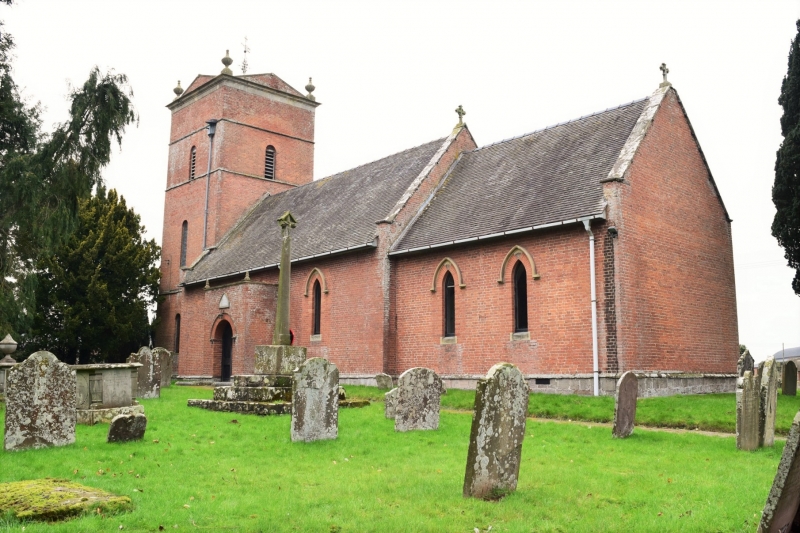 Parish church. Rebuilt in 1720 incorporating C12 south doorway, restored
1880. Brick on sandstone plinth, sandstone and limestone dressings, tiled
roofs. West tower, three-bay nave, two-bay chancel and south porch.
Tower has chamfered plinth, four stages-divided by strings, each except the
top stage slightly recessed from the one below, arched louvred openings with
jambs rising directly from strings beneath to each face of third stage, south
face has similar but slightly off-centre openings to first and second stages;
above top stage is stone cornice and plain frieze, low brick pediment with
moulded stone raking cornices and keystones to each face; gadrooned urn-
finial to each corner; central scrolled wrought iron support, probably C18,
to shaft of weathervane; sun-motif beneath the vane, cross above it; the
vane, in the form of an arrow, has open lettering in a style as if stencilled:
1720/RESTORED/ 1880, brick west doorway is round-headed with continuous roll
moulding crossed by imposts which rise to moulded brick label, above is tablet
with shield-of-arms of the Brydges in a cartouche; early C18 fielded 2-leaved
6-panelled door with semi-circular head; clock on west face of second stage.
Nave has lancets, from 1880 restoration, rubbed brick heads with limestone
cills, moulded labels with stops returning into walls and keystones at the
apex of each lancet; in the centre bay of the south side, concealed by the
porch, is a trefoiled window. Chancel has no fenestration to square east
wall; side walls have lancets like those of nave. Porch is brick with outer
doorway similar to but smaller than west doorway, stone cornice and four
small finials with pyramidical tops, the bases of which overhang the cornice,
above outer doorway, tablet c1880 inscribed: "O PRAY FOR THE PEACE OF/ JERUSALEM/
THEY SHALL PROSPER THAT LOVE THEE/ PSALM CXXII. 6". South doorway is C12, sand-
stone, semi-circular arch of two orders of roll mouldings, the inner continuous
but for the interruption of imposts, thick outer roll moulding is carried on a
pair of detached shafts with deep scalloped capitals and pyramidical motifs
between each scallop; rear arch is segmentally headed; fielded 6-panelled door
similar to that of the tower. Interior has plastered barrel roofs interrupted
by round chancel arch with chamfered jambs and keystone bearing shield-of-arms
of the Brydges, nave has continuous wooden cornice at wall-plate level which
returns across the east and west walls; chancel has similar cornice returning
across the east head of the chancel arch but running out short of the east
wall. Chancel has painted panelled hemi-dome above shallow apse with carved
oak reredos, designed by John Wood the Elder in 1728, deep plain entablature
and moulded plinth returning to north and south at the ends with three plain
panels divided by four pilasters each with three carved emblems, linked by
tassled ropes, of The Crucifixion, The Passion and the Brydges, the tops of
the pilasters are linked beneath the entablature by a frieze containing
cherubs, a pair to each of the outer pilasters and one to each of the inner
ones, between the outer and inner cherubs are flaming hearts and books, between
the inner cherubs a bird with outstretched wings superimposed on a sun; mahogony
armchair probably late C18, to south side of altar, has lattice-work beneath
arms and in back-rest at the top of which is a cut-out quatrefoil; altar table
is mahogony with curved front legs and moulded top; Communion rails are early
C18 with moulded string and rail, spiral balusters divided into three bays by
heavy turned balusters; four ornate wall monuments in the form of aedicules
for William Brydges, died 1668; Anne, wife of Edmund Brydges, died 1696, with
twisted composite columns; for Margaret Brydges, died 1671, aged 20, with
allegorical figures, inscribed:

"Soe Young & Soe Soone dead, conclude we may
She was to (sic) good longer one (sic) earth to stay";

Elizabeth, died 1690, and Francis Brydges, died 1727; two floor monuments,
one for Marshall and Mary Brydges, died 1709 and 1700; the other for James
and Dorothy Greene, died 1714 and 1713. Beneath the chancel arch are two
painted wooden fluted wooden Ionic columns designed as candlesticks each with
a small brass candle-holder, between them a lectern in the form of a kneeling
angel; above the arch to the west, the Royal Arms of George I, "1720", in an
ornate frame. Nave has shields-of-arms of Brydges et al, one to each apex
of nave lancets, perhaps re-used and damaged on their undersides when the
lancets were created. C18 two-decker pulpit, the upper part hexagonal with
two raised panels to each side, matching box pews extending as far as south
door on both sides, open pews with matching end panels and re-used early C17
panels, some with strap work in dado; font has moulded circular base, fluted
stem, circular bowl with moulded rim and four cherubs separated by acanthus
leaves; on the west wall three more Brydges monuments, above doorway to tower
Edmund, died 1722, "T SYMONDS/ HEREFORD/ SCULP"; to the south, another Edmund,
died 1794, with the motto Maintien le Droit; to the north William, died 1764,
T KING, Ft, BATH, a grey marble oval plaque down which a cherub unfurls
inscription scrolls; north side has nave monuments including William Henry
Lee Warner, died 1896, by King, Hereford; Robert Henry Lee Warner, died 1895,
and his wife Isabella by Shirer & Haddon, Cheltenham, inscribed:

In the north-east corner, Francis Brydges died 1793, by T King of Bath,
with a draped urn; on the east wall memorial to Revd Daniel Henry Lee Warner
of Walsingham Abbey, died 1858. Tower has 6-panelled round-headed 2-leaved
east doors; inside is re-used C17 panelling with fluted margins to east and
west; behind benches to north and south are early C17 splat balusters; several
hatchments with mottoes "RESURGAM" and "MEMORIA PIJ AETERNA". The Brydges
lived at Tyberton Court, which was probably designed by Wood the Elder (1704 -
54) whose early patron, the Duke of Chandos, was a Brydges. Included II*
owing to C19 alterations to the fenestration. (BoE, p 302; Colvin, H:
A Biographical Dictionary of English Architects, 1660 - 1840, John Murray, 1954,
p 692; Gunnis, R; Dictionary of British Sculptors, 1660 - 1851, Abbey Library
n.d., p 229; RCHM Vol I, p 242; String, R, Binney, M and Harris, J: The
Destruction of the Country House, Thames and Hudson, 1974, p 189).