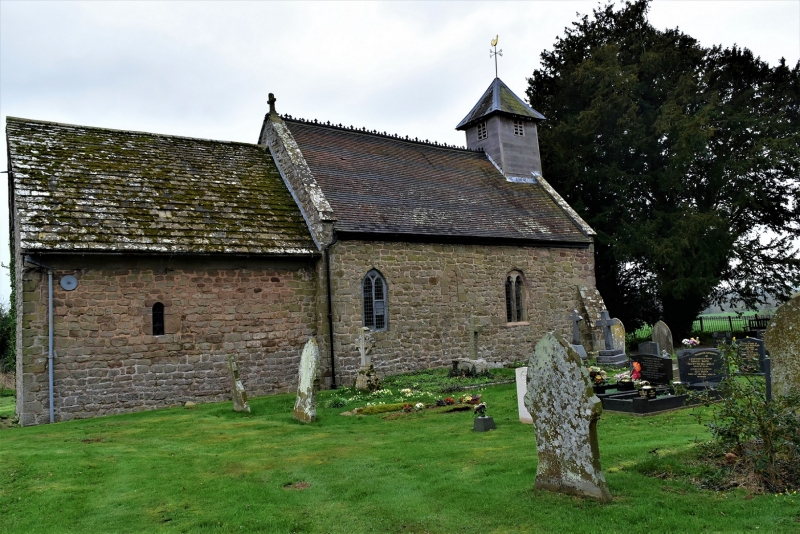 
Former parish church. Mainly C12, restored c1865 and 1909. Sandstone
rubble, nave roof has plain tiles with stone cross on eastern verge,
chancel roof is stone slate. C17 timber bell-turret with lead sides
and slate roof. Two-bay nave, west bell-turret, two-bay chancel, early
C20 west porch. Chancel: single-light C12 windows, the two to the south
altered into trefoiled ogees in C14. Nave: blocked 2-centred arch,
possibly C13, behind the porch, may have been for access to a projected
west tower; north-east window has ogee headed wooden 'Y' tracery, probably
C18; north-west window has two c1300 trefoil headed lights, between the
two is a blocked C12 single light window at a higher level; two south
windows also each have two trefoiled lights. Interior: barrel roof, plastered.
Chancel arch is round-headed, plastered over and has C18 imposts and key-
stone. Two fonts, one C12 with round bowl, cyclindrical stem and four
carved lions with emphasis on their fur on the base; the other on the
south-east nave window cill, is a small c1645 urn-shaped font with a
gadrooned rim supported by a C15 (?) angel holding a book. At the west
end of the south wall of the nave, striking monument to Elizabeth Cotton,
died 1645; broken pediment supported by barley-sugar columns, inscription
under segmental arch flanked by a pair of female figures, semi-reclining
cadiver beneath. Corbel head, C14 (?), re-set high up on west wall of nave
above C12 font. The parishes of Sutton St Michael and Sutton St Nicholas
were united in 1876. (RCHM, Vol II, p 178).