A Grade I Listed Building in Sarnesfield, Herefordshire, 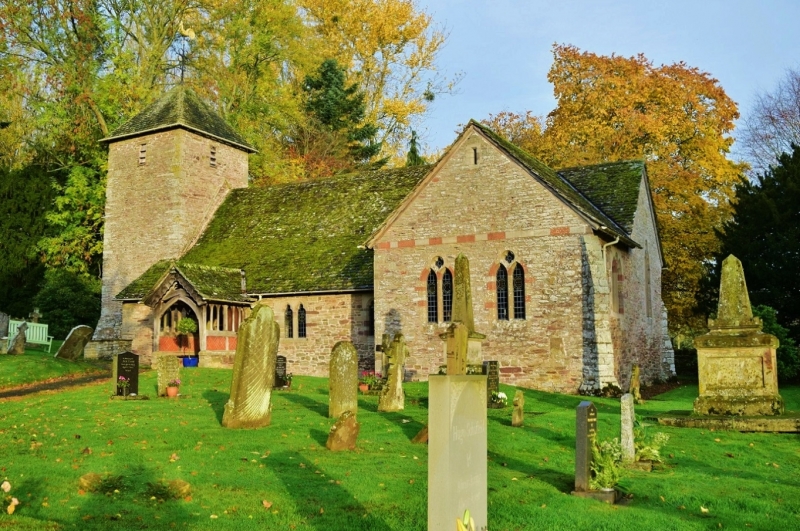 Tower has three
stages above deep battered plinth and pyramidal roof with large weathercock.
West elevation has a pair of lancets with roundel between apices on ground
stage. Round-headed loop to first stage and square-headed opening to top
stage within which is a subsidiary oak trefoiled head. North, south and
east faces have similar upper openings to west elevation except that of east
face has scars of higher nave roof. North elevation of nave has central
three trefoiled and ogee-headed lights under a square head. Chancel has a
diagonal buttress to the north-east corner. East window is restored. Two
trefoil-headed lights with quatrefoil tracery. South chapel has similar east
window to that of chancel but with smaller lights. Diagonal buttress to south-
east corner. South elevation has two pairs of C19 lancets each with a
quatrefoil above and red voussoirs. Gable has loop and red and grey sandstone band
at eaves level. To the lower right-hand side is a re-set stone with incised
chevrons. South aisle has sandstone plinth and C19 roof of two bays with
cusped and cambered ties forming trefoils with principals. Ties supported by
curved braces. Intermediate collar truss rests on arch braces. Cusped
bargeboards and lower range of wind braces. Restored side panels in form of lancets
above brick-filled lower panels. South doorway has two-centred head and ledged
oak C19 door with strap hinges.