A Grade I Listed Building in Eardisley, County of Herefordshire 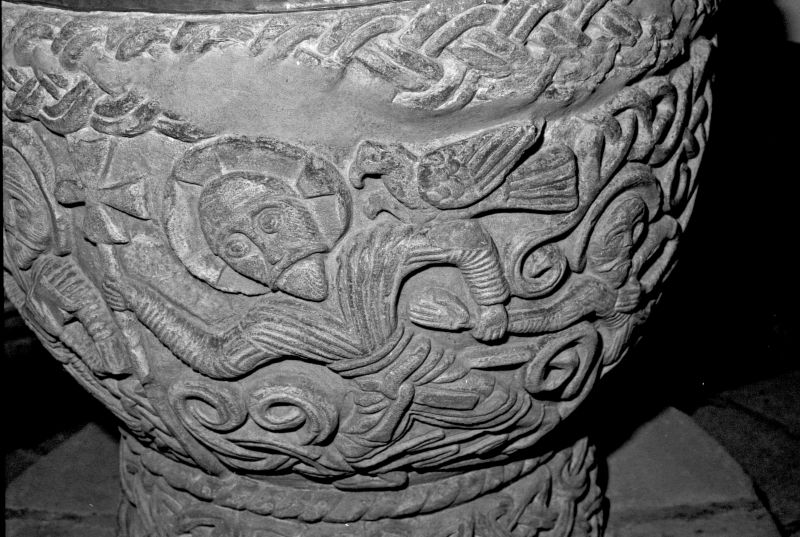 North-west tower: rebuilt circa 1708 after a fire. Four stages with strings
and battered plinth. The lower stage has a pointed north doorway and a
rectangular west light which interrupts the plinth. The second stage has a
smaller rectangular light in the north and west walls and a blocked south
window. The third stage has a rectangular light in the south side and an
east clockface. The belfry stage has rectangular louvred bell chamber
openings above which are round arches filled with rubble. There is an embattled
parapet and a shallow pyramidal roof with a weathervane. A lean-to addition
adjoins the south side. Nave: circa 1200. West end has a buttress with
offsets at the south side, a C14 blind pointed archway and, above it, a 3-
light C14 windows. The clerestorey was added circa 1330 and has three
square-headed 3-light windows and, at the western end, a pair of cusped
ogee-arched lights. The north aisle was added in the early C13 and widened
and extended to the east by two bays in the late C13. It has a gabled roof,
and there is a buttress at the north-east corner and a C19 buttress at the
centre of the north elevation. In the north elevation are four early C14
windows including a pair of cusped lancets, three stepped cusped lancets, a
2-light window and a single cusped lancet. There is also a north doorway
with a painted arch and chamfered jambs. At the east end is a tall 3-light
window and a small lancet in the gable apex. The south aisle is earlier,
probably circa 1200 and probably represents the extent of the whole church
at that time, the easternmost bay being a former chapel leading from the
Norman chancel. It has a lean-to roof and in the south wall are two square-
headed 2-light C14 windows and a 3-light circa 1300 window. At the east end
is a pair of cusped lancets, also circa 1300. The south porch is late C14
and gabled. It has a pointed archway of two moulded orders with moulded
imposts and a cusped ogee-arched light in the east side. The late C14 south
doorway has a four-centred head and moulded jambs. Chancel: added circa 1300.
It has a 3-light east window with a hoodmould and in the south wall are three
stepped lancets, a pair of cusped lancets and a central pointed doorway with
chamfered jambs.

INTERIOR: there is no masonry chancel arch. South arcade
was cut through the former aisleless nave and has round arches with imposts
and chamfered piers with carved stops. The third pier from the west end is
much larger and formerly stood between the Norman nave and chancel; it has
a round-arched recess with a C14 moulding on the north side and an ogee-arched
recess on the west side. There is also a C14 ogee arched recess in the west
side of the south-east respond. The unmoulded easternmost arch is the original
former opening to a chapel of the Norman chancel and at the very east end of
the arcade are the C14 upper and lower doorways to the rood loft, both of which
have square heads. The north arcade is also of two dates; the three westernmost
arches are C13 and have two-centred heads of two chamfered orders with octagonal
columns and semi-circular responds. The two easternmost arches are circa
1330; the first one is smaller and has crocketted hoodmoulds with head stops
and finials on both sides whilst the second is wider and has a hoodmould on
the south side. At the eastern end of the arcade is a C14 ogee arched squint.
A round-arched doorway at the end of the north aisle leads into the tower.
The nave has an ashlared collar truss roof and the chancel has a wagon roof
at the west end of which is the moulded timber chancel arch on foliated
corbels with human head bases. There is an early C14 cusped piscina in the
chancel and at the east end of the south aisle is a C13 cusped piscina. Font
is mid-C12 and among the best examples of the Herefordshire School (cf Castle
Frome). It has a circular bowl with cable-necking on a splayed base with an
interwoven design. Upper and lower parts of bowl have bands of interlacing
and main part has figure reliefs representing the Harrowing of Hell, two men
fighting and a large lion. There is a late C15 sallet and a late C16 combed
helmet on the east wall of the nave.

Memorials: in south aisle to Alice Harper,
died 1680, with segmental pediment and scrolled surround. In north aisle are
two mid-C18 monuments to the Barnesley family and in the chancel are two mid-
C19 memorials to the Hodgson family, and four mid-C19 memorials, two at the
east end with crocketted and finialed arched niches and flanking pinnacled
buttresses to the Coke and Cockburn families. There are also some C17 brasses -
in the north aisle to Sydney Conyingesbye, died 1627, and Sir Humphrey Baskerville,
died 1617, and in the nave to George Coke, died 1646, and Henry Harper, died 1687.
Also C14 coffin lid in tower and numerous ledger slabs, many of late C17 and
early C18 date and also a broken circa 1400 one in the south aisle.