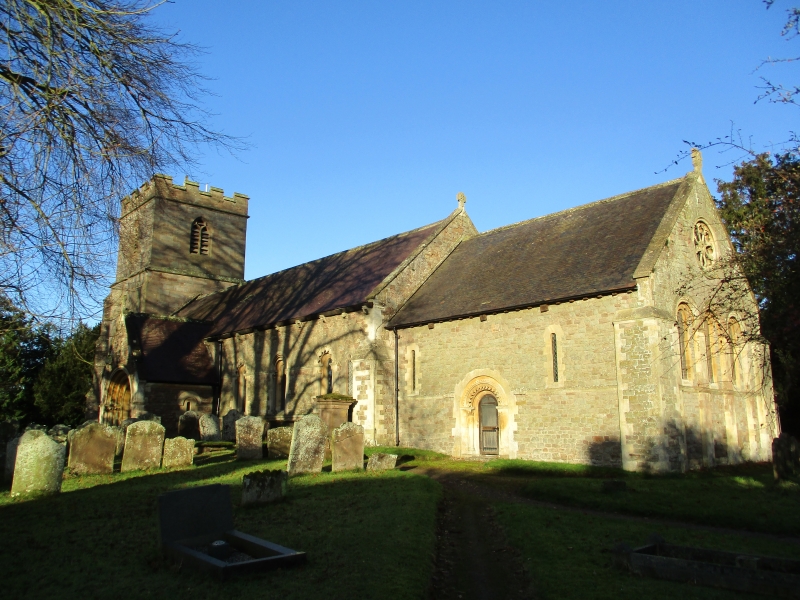 EXTERIOR: The tower is C14 and C15. The remainder is mainly in an elaborate neo-Norman style, intermixed with Gothic elements and built around some genuine C12 work. The 3-stage tower has diagonal buttresses and polygonal north-east stair turret in the lower 2 stages. The west window is 2-light Decorated, above which are small cinquefoil-headed windows in the second stage, and later narrower bell stage with 2-light Perpendicular bell openings. The embattled parapet conceals a later pyramid roof. The nave south doorway is late C12. It has 2 orders of nook shafts with leaf capitals, and an arch incorporating chevrons and roll moulding. The remainder of the nave, aisle and the south porch have round-headed windows with nook shafts, sill and impost bands, and corbel table to rainwater goods. The exception is a C14 cusped nave south-east window, lighting a former altar, that is now made to look out of place. The porch entrance has 3 orders of shafts and foliage capitals. The earlier chancel has plain round-headed south and north windows, and east window of 3 lights set in a blind arcade of round arches, below a Gothic rose window. In the south wall the sill band terminates either side of the priest¿s door with grotesques.

INTERIOR: The C14 tower arch has 2 orders of continuous chamfer, and inner order on simple imposts. The chancel arch is C12 and has two orders of nook shafts with scalloped capitals, with chevrons in the arch. The only other medieval feature is a simple pointed piscina in the south-east corner of the nave. The chancel roof of 1847 is 4 bays with collar beams. Nave and aisle have trussed-rafter roofs. The north arcade is 4 bays, with pairs of round columns and French early-Gothic capitals to round arches. Walls are plastered. Windows have ornate rere arches. Floors are red and black tiles, with wood floors below pews.

PRINCIPAL FIXTURES: In the nave south wall is a C14 segmental-pointed recess enriched with ballflower, containing an effigy of a knight with shield. The font is a massive plain round bowl of the C12, on a C19 stem and base. The chancel screen incorporates C16 work in its delicate tracery and foliage trail. A simple C16 screen in the north chapel, together with the (altered) C18 communion rail, was brought from Avenbury church, via nearby Munderfield chapel, in 1980. On the aisle east wall is a painted memorial to Margery de la Downes (d 1598). There are several C18 and C19 wall tablets, and grave slabs set along the chancel north and south walls. The east window shows scenes from the life of Christ, c1847, and in the west window are Faith and Charity, c1936. Benefaction boards beneath the tower are of 1786. Simple pine pews and choir stalls are of 1861.

HISTORY: Of the original late C12 church only the chancel arch and the south doorway have survived. A tower was added in the C14, heightened in the C15. The present plan of the church might be medieval but it is no longer possible to tell because of the major rebuilding works of the C19. The chancel was rebuilt in 1847, possibly by R.C. Carpenter (1812-55). In 1861 the nave and aisle were rebuilt, which included exterior re-facing, by F.R. Kempson (1837/8-1923). Kempson began his career in London but moved his practice to Hereford in 1861 and received many commissions in the county.

REASONS FOR DESIGNATION:
The church of St Mary, Bishop's Frome, is listed Grade II* for the following principal reasons:
* It retains C12 south doorway and chancel arch of high-quality.
* It has a well-preserved C14 and C15 west tower, which is the most prominent external feature of the church.
* For its medieval fixtures, chiefly a C14 tomb recess and effigy, and C12 font bowl.
* It has other fixtures of quality including screen with medieval parts, painted C16 memorial and communion rail and screen brought from Avenbury.
* The Neo-Norman work is unusual, and an interesting echo of a style of church building for which the country is renowned.