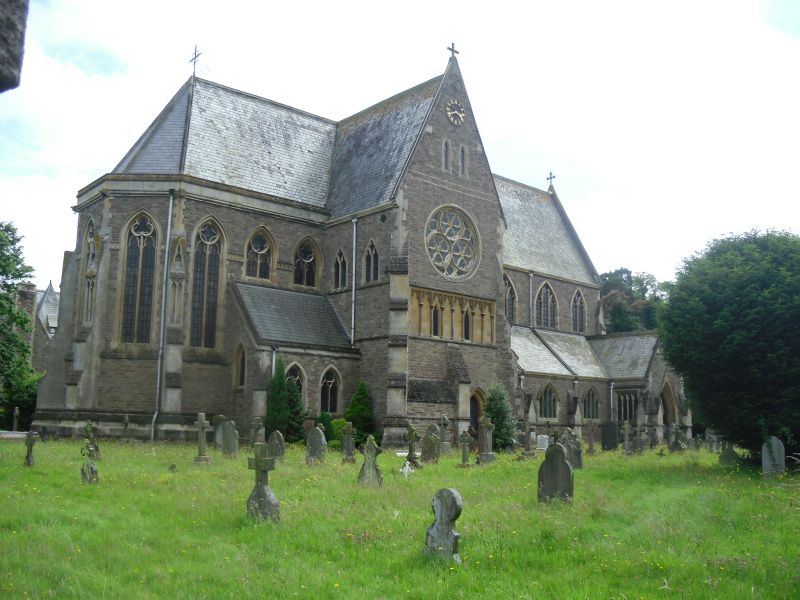 
Anglican church. 1856-8 by Woodyer for the Rev Sir Frederick Gore Ouseley. Coursed dressed rubble with
ashlar dressings. Slate roof, partly behind plain parapets with gable-end parapets, kneelers and cross-finials. Four-bay clerestoried and aisled nave with north porch, north and south transepts and apsidal aisled chancel with south vestry. Nave: continuous chamfered plinth and moulded eaves cornice. West end is flanked by large buttress with offsets. The west doorway has a pointed doorway of three moulded orders with nook- shafts and a hood-mould with figured stops. The hood-mould returns to the buttresses and runs beneath a cusped traceried blind arcade. Above the arcade is a 6-light window and above the window a 2-light louvred bell-chamber opening. The clerestory has three 3-light windows with four-centred arched heads and a 2-light western-most window. The lean-to aisles have a continuous sill string and gabled buttresses with offsets at the bay divisions and angled at the western corners. There is a 4-light window with a square head beneath a 2-light window at their west ends. Both aisles have three 4-light windows with hood-moulds and foliated stops in the three eastern-most bays of their side elevations. The western-most bay of the south aisle has a pointed doorway of three moulded orders. The north porch is situated in the western-most bay of the north aisle. This has a gable end parapet and gabled angle corner buttresses, a pointed door-way of three chamfered orders and one moulded order, within a cusped gabled moulding on short engaged columns and above the archway is a 3-light opening with a square head. There are 4-light square-headed openings each side and a pointed door-way of three moulded orders within. Transepts: these have diagonal corner buttresses with offsets and at their west end is a blind cusped pointed arcade with two smaller cusped lancets pierced within two of the archways. Above the arcade is a rose window and within the apex of each gable are two cusped lancets and a clockface. The side elevations have two 2-light windows with a sill string. The north transept has a small central buttress at its west end with a lean-to addition to the east of it and a pointed door-way to the west of it. The south transept has a lean-to addition along its entire south end which continues around its west side and has small cusped lancets pierced along its entire length. Chancel: roof has plain parapet with gargoyles at the eastern angles. There are also gabled buttresses with offsets and blind traceried panels at the eastern angles. Tal12-light windows throughout with quatre foils with circles or trefoils beneath the pointed heads and with a continuous hood-mould returning as a quatre foil frieze between the windows. The lean-to aisles have 2-light windows in their side elevations and a single-light window at their eastern ends. The Vestry: adjoins the southern aisle and has a separate gabled roof behind a parapet with a gable-end finial. There are two east end windows and a south side window, all are of three lights and have hood-moulds with returns and a sill string. Interior: four-bay nave arcades of two moulded orders with hood- moulds and head and foliated end stops on columns with foliated capitals. Similar archways into transepts and also two-bay arcades into chancel chapels set beneath a single large arch. Quadripartite timber vaults throughout chancel roof incorporates two diaphragm arches enriched with quatre foils, and is richly painted. Ornate gabled three-bay timber reredos, crocketted and finialed with foliated detail and having flanking pinnacled 'flying' buttresses. Aumbry has three columns supporting base and ballflower moulding and there is a three-bay sedilia beneath a cusped crocketted and finialed arch. The limestone font in the north transept is raised on a three-stepped base and of polygonal plan with crisp foliated detailing. The polygonal timber font cover is remarkably tall rising in numerous richly carved tiers. There is a well nearby the font. Fittings and fixtures elsewhere all survive and including the altar rails, choir stalls with quatre foil decoration, tall chancel screen with fine but restrained detail, richly painted and gilded organ pipes, a five-sided stone pulpit with figure reliefs and tiled floors throughout. The stained glass is of particular interest and the sanctuary windows are by Hardman (VCH, IV, p370; BOE, p278).