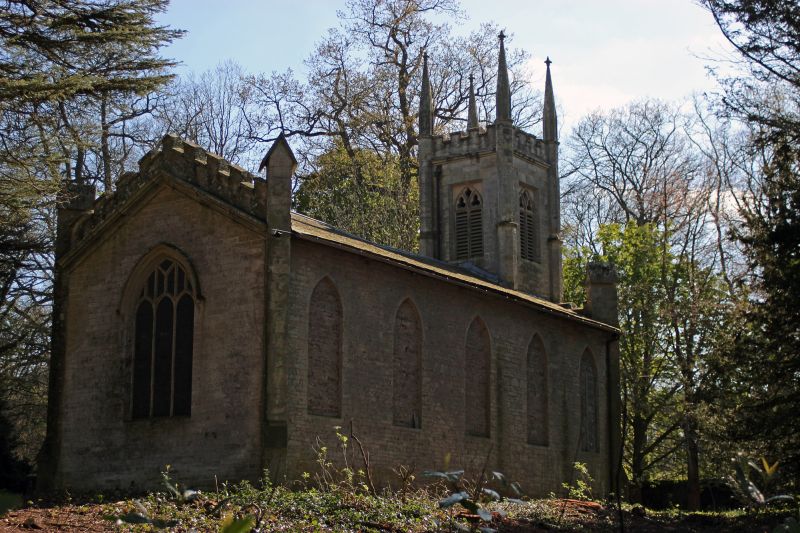 Built c1799 by George Byfield, with glass by William Eginton. Sanctuary altered 1888-91 with reredos and glass by Powell's.

PLAN: Nave and chancel under a single roof, with embraced west tower.

EXTERIOR: A Georgian Gothic chapel of tall and compact shape, which has embattled parapet and gables to the main elevations. Tall gabled buttresses rise above the parapet, and are diagonal at the angles. Entrance is by the west door, which has Gothic panelling and is beneath a blind-tracery overlight and square label. Above the doorway is a coat of arms in Coade stone, and a small wheel window. The tower rises from polygonal clasping buttresses, and its 2-light bell openings, recessed in square-headed frames, have Y-tracery and louvres. The embattled parapet has tall pinnacles. In the 5-bay south wall are tall 2-light windows with simple Perpendicular tracery. The chancel has a similar 3-light east window. The north side is plain, with blind windows.

INTERIOR: An entrance vestibule beneath the tower is flanked by a vestry and gallery stairs, occupying the bay at the west end. Nave and chancel are a unified space of 3+1 bays. A segmental plaster ceiling has thin ribs forming quadripartite bays on moulded cornice with cherubs. Windows have reveals with triple continuous roll mouldings. The stone-paved floor is integral with the original building. The west gallery is reached by a stone dog-leg stair, which has iron balusters and wooden handrail. A simple marble chimneypiece is in the vestry.

PRINCIPAL FIXTURES: The interior retains many of its original fittings. Consistent use is made of trefoil-arched panelling for doors, doorway reveals, pews, pulpit and reading desk. A west gallery is carried on an arcade of 3 bays, with clustered wooden shafts and wide 4-centred arches, which have quatrefoils in the spandrels. The gallery front has a quatrefoil frieze and blind trefoil-arched panelling. Box pews are arranged collegiate style with 2 tiers of pews and with further tiers facing east beneath the gallery. The pews have additional hinged front benches. A polygonal pulpit, which has steps with a Gothic balustrade, and reading desk on the north side are an integral component of the pews. Communion rails have open Gothic arcading. The font is an octagonal stone bowl on a marble stem with lavish foliage capital. In the chancel is a mosaic reredos and dado, of 1888, made by Powell's. It includes a central icon copied from the monastery at Sergiyev Posad in Russia. Walls retain original wrought-iron lamp brackets. There are several high-quality wall monuments: Edmund Higginson (d 1798), with a mourner holding a portrait medallion; Lydia Buckley (d 1812) with mourning female figure, by J. Bacon Junior; John Barneby (d 1817), with female mourner standing by a sarcophagus, also by Bacon. Of the original 3-light stained-glass east window, 2 lights were removed in 1888 and placed in their original frame within the reveals of the south-west window, and show the Transfiguration, by William Eginton. Other windows are mainly by Powell's, in understated autumnal colours: the east window of 1888 by Powell's of Whitefriars was designed by Mary Lowndes in the Raphaelesque manner and shows Faith, Hope and Charity with figures of Virgin Mary, Mary Magdalene and Cecilia. Two south windows of 1891 show four Virtues, designed by Ada Currey. The south-east window, of bright red, blue and green, shows Christ blessing children, post 1857.

HISTORY: Begun c1798 and consecrated c1810-11, the chapel was built in the grounds of Brockhampton Park at the expense of John Barneby, replacing a small Norman church at Lower Brockhampton. It was designed by George Byfield (c1756-1813), who was responsible for several country houses, but who specialised in prison building. Brockhampton is his only church. Brockhampton was one of the earliest churches in Herefordshire to be built in a Gothic-revival style. Glass for the east window was made by William Raphael Eginton (1778-1834) of Birmingham. New stained-glass windows and a reredos were made in the period 1888-1891 by Powell's of London, to designs by Mary Lowndes (1857-1929) and Ada Currey (1852-1913).

REASONS FOR DESIGNATION:
Brockhampton Chapel,Brockhampton-by-Bromyard is listed at Grade II* for the following principal reasons:
* It is a well-designed and well-preserved chapel that was one of the earliest Gothic-revival churches in Herefordshire;
* It retains many of its interior fittings, including gallery, pews, and pulpit, that give the interior its authentic early C19 character;
* The stained glass by the noted Eginton workshop is particularly unusual, and wholly in keeping with the Georgian Gothic of the chapel;
* Other good-quality early-C19 fittings include three wall monuments;
* It has well-designed late-C19 reredos and stained glass.