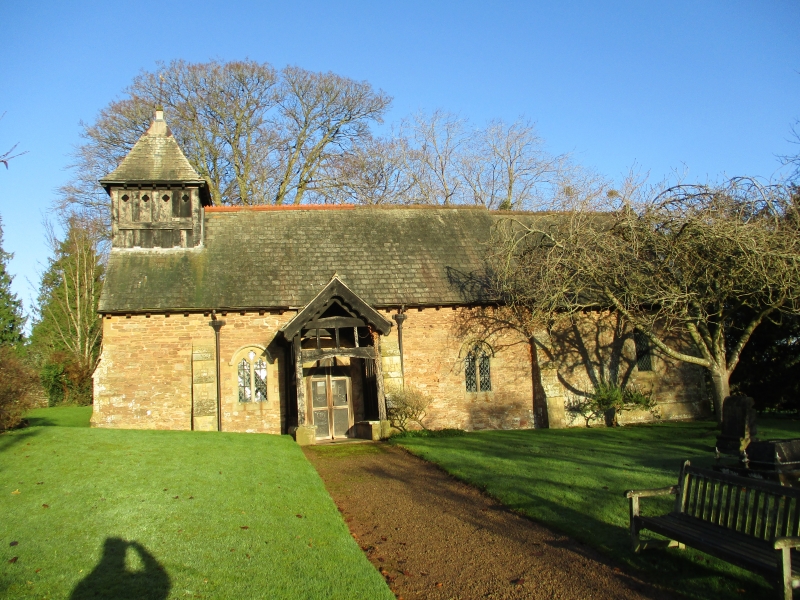 II*
Parish church of medieval origin, restored in 1877 by Nicholson of Hereford, possibly with a C17 phase too.

EXTERIOR: A low and heavy exterior of masonry and slate with sparing fenestration, offset by the timber belfry and porch. In the north and south nave walls are 2-light windows with Decorated tracery under semi-circular labels, of which the south-east window is unrestored and provided the model for the others. The south doorway has a pointed arch made up of 2 large blocks of stone, one of which is carved with crude quatrefoil and trefoil, and is therefore re-used. It stands within a C19 timber-framed porch, which is open-sided on a dwarf stone wall. The nave has 3 C19 buttresses. The west wall is entirely a C19 rebuild and has 3 buttresses and cusped window. The timber-framed belfry has boarded panels incorporating quatrefoil sound holes, and pyramidal roof on swept eaves. The chancel has an ogee-headed south window and east window of 3 cusped round-headed lights under a super arch, which is possibly the faithful restoration of a C17 window.

INTERIOR: The nave roof of closely-spaced rafters, strengthened by tie beams, is late medieval or C17 work, with C19 brattishing. The belfry is supported on tall timber posts on stone bases, braced by a cusped arch. The break between nave and chancel is marked by a wooden chancel screen added in 1877, of 3 main divisions with delicate tracery beneath an earlier tie beam, and superimposed by stepped cusped arcading in the roof space. The chancel has an open wagon roof of 1877, and has a cusped piscina and larger cinquefoil-headed aumbry. Walls are plastered. The nave floor is stone-paved, with raised wooden floors under the pews. Decorative and encaustic tiles are in the chancel.

PRINCIPAL FIXTURES: The plain round Norman tub font has an elaborate saucer-shaped C17 cover with radiating leaves. Benches of the C16 have ends with blind Gothic panels. Those at the western end are copies added in 1877 to provide extra seating. The polygonal pulpit is C19 but may incorporate earlier panels. C19 choir stalls have moulded ends. There are 2 large wall monuments against the west wall: Margaret Dobyns (d 1658 in childbirth), a portrait bust of woman with swaddled child, in a round arch flanked by allegorical figures, and reclining putti on the slopes of a segmental pediment with achievement: a very good instance of provincial artisan mannerism. A more rustic monument to Catherine Dobyns (d 1710 aged 12) has a tablet, enriched scrolls, apron, and putti on the slopes of an open pediment. In the nave floor are grave slabs of Isaac Ailway (d 1668) and Robert Dobyns (d 1713). The east window, of 1877, is an early work by C.E. Kempe, showing Christ in Glory. The west window shows St Andrew.

HISTORY: The font demonstrates the Norman origin of the church, although the earliest architectural features are the roof and the south-east window of the nave, which have been interpreted as medieval but might be C17. The church was thoroughly restored in 1877 by Thomas Nicholson (1823-95), architect of Hereford. He inserted most of the present windows, the chancel roof, and built the present bellcote and porch.

REASONS FOR DESIGNATION
The Church of St Andrew, Evesbatch, is designated at Grade II* for the following principal reasons:
* For the extent of its early fabric, including the nave roof.
* For its intactness and careful restoration.
* For its form and material, which are highly characteristic of the area
* The Margaret Dobyns monument of 1658 is a particularly good instance of a provincial monument in the Artisan Mannerist style, echoing fashionable tomb types.
* Other fixtures of special interest include the font, font cover and benches.
* It has a well-designed east window by C.E. Kempe.