A Grade I Listed Building in Leintwardine, County of Herefordshire 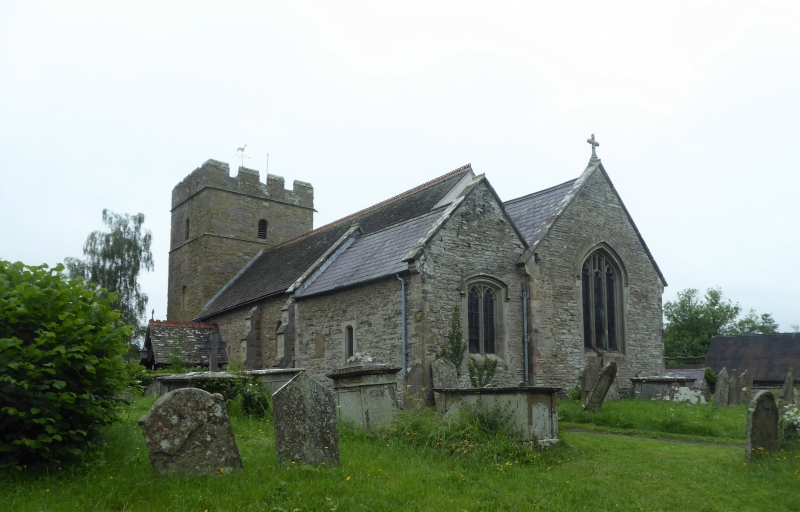 Tower is C14, partly rendered. with embattled parapet and conical roof to
newel at north-west corner. Five stages externally undivided. Chamfered
plinth and weathered angle buttresses which rise to bottom of top stage.
West side has one chamfered central square-headed opening to the middle
stages, to left of which is projecting cylindrical newel corbelled at the
bottom containing four loop lights. Obelisk finial to top of newel. Top
stage has a pair of trefoil-headed chamfered openings under square head with
hoodmould and stops. North side has similar openings to top stage and a
lancet to next lower stage which is partly masked by a clock face. East
side again has similar top stage openings, one central loop to the next
lower stage and two irregularly placed loops beneath. Top of the south
side has two trefoil-headed openings with trefoiled tracery under a two-
centred moulded head with label and stops. Between the tops of the angle
buttress is a central clock face, beneath which is an opening with a two-
centred head within a more pointed chamfered super arch. The opening has
an eight-paned window. Above the south doorway of the tower is a chamfered
lancet. South doorway at the base of the tower has a two-centred arch of
three orders. The inner two have continuous mouldings; the outer has short
imposts which also stop a label. West elevation of nave has a traceried
main window of five restored cinquefoil-headed lights beneath a two-centred
arch. Above is a low gable with cross. To the left of the window is a C12
blocked doorway with a round head and attached colonettes with foliated
capitals. Above the former doorway and around the west window are occasional
bricks, possibly C18. Each aisle has a single lancet, that to the north the
more restored with a diagonal buttress to the left. North elevation of nave
has deep plinth with continuous weathering beneath three deeply recessed
sharply pointed traceried aisle windows. Their chamfered heads die into
the jambs. Each window has two restored trefoil-headed ogeed lights. Between
the centre and right-hand window is a weathered buttress. Plain aisle parapet
and coved frieze with water spouts in the form of lions' heads. Above the
aisle are three clerestory windows each having a pair of recessed trefoil-
headed lights with deep mouldings set beneath a flat triangular outer arch.
To the left the aisle returns northwards by one window, forming the north
nave aisle chapel. In the angle is a water spout designed as a gryphon.
North nave aisle chapel has two windows, both similar to those of the north
aisle. One faces west; the other north. Diagonal buttress to north-west corner
and weathered buttress to east at junction with main north chancel chapel at
which point the continuous cove ends in another lion's head spout. Main north
chapel has three windows, each with a two-centred head, quatrefoil tracery
and two ogeed trefoil-headed lights. Four weathered buttresses, scattered
bricks and half roll-moulding beneath the eaves. Gables have verges. Late
C19 conical shafted stack to south slope of west verge. East elevation is
partly rendered and has an entirely restored traceried window with a two-
centred arch and five cinquefoil-headed lights. To either side is a
weathered buttress. Chancel has roll moulded string above low chamfered
plinth. Circa 1900 traceried east window with five main lights, divided
by transom into ten lights, all with cinquefoiled heads, the upper row
also ogeed. Angle buttresses to south-east corner. South side has a pair
of wide late C19 lancets with roll moulded heads and waterleaf capitals on
colonnettes. Restored C13 central priest's door has round moulded and
chamfered head and jambs in three orders with shoulders. Corbel table.
Verges with kneelers. Gable cross to west and stump of one to east.
West gable is partly rendered. South elevation of nave has three pointed
2-light windows with quatrefoil tracery. Each light has an ogeed and
trefoiled head. Embattled ashlar parapet above three weathered buttresses
which rise to string on which are three lions' head spouts. Bricks and
brick fragments around the windows. Three clerestory windows similar to
those on north side. East window of aisle resembles those on south side.
Interior has heavy timbers beneath first stage of tower which forms entrance
porch. Also under the tower are moulded corbels and a ledged door at the
head of three steps, to newel. In the south-east corner are some high
wrought-iron railings with one rail forming a small enclosures. Inner
side of south doorway of tower has triangular two-centred head. Doorway
from tower to south aisle is C13 with two moulded orders, the inner one
more deeply moulded with continuous fillet to jambs. Outer order on single
detached shafts with water-holding bases and circular moulded capitals
supports another fillet moulded order. Label is roll moulded and runs out
into concave chamfered jambs. Above the doorway is a two-centred relieving
arch.

Roof of nave is C15 with low moulded principals supported by angle
braces on corbels and divided into five bays. The slopes are panelled and
have enriched bosses at the junctions. Chancel roof is restored with swept
braces supporting collars carrying V-struts. The braces are carried on
horizontal members supported from corbels. Apart from the single-framed
wagon roof of the main north chapel, the remaining roofs are smaller
equivalents of the nave roof. Chancel has restored cinquefoil-headed
piscina with no drain. Three C14 sedilia each with two-centred
to round outer arch and trefoil-headed inner arch. Reredos is C15 or C16
but fragmentary, consisting of bands of cinquefoil-headed panels separated
by a quatrefoiled frieze and crocketted framing. In the centre is an
early C20 reredos of Christ in Majesty dedicated to 18 former pupils of
the local school who gave their lives in The Great War. Choir stalls
perhaps from Wigmore Abbey, according to BoE, are probably C15, restored in
late C19. Six-seater benches with restored crocketted ogeed and carved
canopies to each side. Those to south side with a set of figurative miser-
cords; those to north heavily restored with replaced arm-rests.
Corresponding desks to each side. That to south has C15 poppy-head ends above ogees
with lions and various figures. The C20 north desk is inscribed: M G
R R
V
1910 - 35
Chest on north side is perhaps C17, about eight feet long with strap hinges,
two locks and a late C19 or C20 lid. Communion rails are late C19 with
wrought-iron foliated supports. Stained glass in east window depicting The Crucifixion
and Ascension is for Colonel John ..... (?), 187(?). Chancel arch is late C19
with a chamfered two-centred head resting on two corbels one with a queen's,
the other a king's head, from which rise attached shafts with waist-bands
and stiff-leaf capitals: Main north chapel is separated from chancel by
C14 arcade of three bays. Pointed double chamfered arches on octagonal piers
with deeply moulded abaci. Above the centre arch a corbel for an earlier
roof. Eastern respond has small ogee-headed niche. South wall above arcade
has keel-moulded string. C15 traceried screen in six panels with cinquefoil
headed panelling, ogees and crockets. One panel with a nodding ogee. Large
wall monument on west side to Banastre Tarleton, Baronet, died 1833. Book
resting on plinth with military trophies. West window on north side has
stained glass depicting The Good Shepherd for John Thomas Chambers, died 1889.
The left light reads: "All we like sheep have gone astray, we have turned
every one to his own way". The right: "Behold I even I will both search my
sheep and seek them out". Large late C19 organ with pine case inscribed:
"Nicholson & Co/ Palace Yard/ Worcester". Pointed C14 arch into north aisle
dies into jambs. North nave aisle chapel has C14 piscina with trefoiled arch
under a square head and trefoiled spandrels. Deep moulded string in east wall.
Fragments of medieval glass in tracery of north window. Early C17 communion
table of oak. Nave has C13 south arcade with round piers and abaci. North
arcade which is C14 has octagonal piers and abaci. The earlier arcade has
chamfered pointed arches; the later one has double chamfers. Above the
arcades are corbels for an earlier roof: Font is C14 with octagonal bowl,
ogees on curved underside and a late C19 square base. Low wall dividing nave
from chancel has blind recessed quatrefoils and ballflower decoration. Three
wooden angels attached to piers, probably C15, hold shields. One is inscribed
in paint: RC the other: GG
EA JS
CW CW
1811(?) 1828.
Table made of of fragments of C15 wooden tracery with ogeed heads. Restored
re-mounted C16 clock with wrought-iron and brass mechanism. Beneath the west
window memorial to the 37 men of the parish who fell from 1914 - 1919. West
window of the Annunciation and Nativity, for John Clarke Prescott, died 1863,
inscribed: "Hail thou that art highly favoured the Lord is with thee. Thou
son of David have mercy on us. Thou art my beloved son in thee I am well
pleased": South aisle has chamfered pointed C19 doorway under newal of tower.
Stained glass in south-east window for Herbert Crawshay, died 1907, depicts St
Peter and St Mary Bethany. West window is for Mary Louise Crawshay, died 1869,
with Christ and St Mary Magdalene, inscribed "JESUS called a child unto HIM".
Central south window is for Lt Col Hugh Henrv Gough dated 1913 and illustrating
"COURAGE" with the" inscription BE THOU FAITHFUL UNTO DEATH & I WILL GIVE THEE
THE CROWN OF LIFE.