Church of Saints Cosmas and Damian

A Grade I Listed Building in Monkland and Stretford, County of Herefordshire 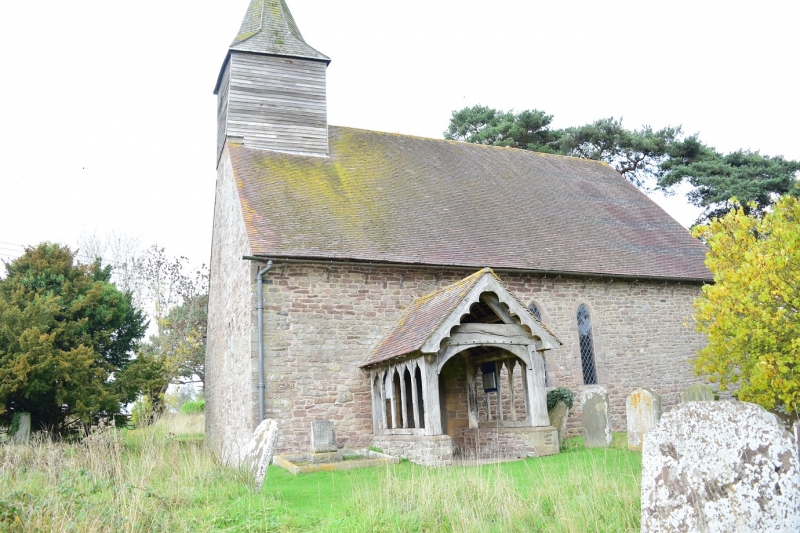 North nave and chancel in one,
C12, have to north wall a large lancet and a small C12 window with semi-
circular head. Towards west end a blocked door of C12 with semi-circular
head and chamfered jambs. West window is of two trefoiled lights with a
circular window above. East window of two pointed lights under a two-centred
head. South nave and chancel in one, C13, with-two lancets. South porch is
of timber and C15. Outer entrance has an arch-braced tie-beam. The south door
has chamfered jambs and a two-centred head. The west window is of two trefoiled
lights under a square head, the east window is of three pointed lights with
intersecting tracery under a two-centred head with an ogee point.

INTERIOR
has a central arcade of three bays. This has two-centred arches of two
chamfered orders on circular piers with moulded capitals and base. The
eastern respond rebuilt in C15 has a rectangular stone structure with crenellated
cornice over a recess with moulded jambs and square head. Two tomb recesses in
north wall. That to east has a moulded ogee arch with label and head stops.
Set in recess effigies of a knight and his wife, probably early C14. The
recess to the west has a segmental pointed arch, over mid-C14 stone effigies.
Roof is probably C15 of two bays with wall posts reaching to floor and
intermediate trusses. Western truss has a tie beam, and arch-braced collar which
forms a part of the bellcote structure. The intermediate truss is supported
on corbels. The collar is arch-braced and is further supported by a crown
post resting on the top of the arcade. The central truss is similar with
moulded tie beam, and the screens are framed into the wall-posts. The second
intermediate truss is similar to the other. The eastern truss has tie beam,
arch-braced collar, crown post and V-struts in apex. Four tiers of purlins,
the upper two with curved wind-braces, the lower two with cusped wind braces.
The second purlin up is square-set, not in the slope of the roof, and the
principal rafter stops at the collar, in the manner of a base cruck, although
the principals are straight. The screens each have three bays, the central
one containing the door, the outer bays having three openings with ogee trefoil
heads and tracery. In the care of the Redundant Churches Fund.