A Grade II* Listed Building in Brimfield, County of Herefordshire 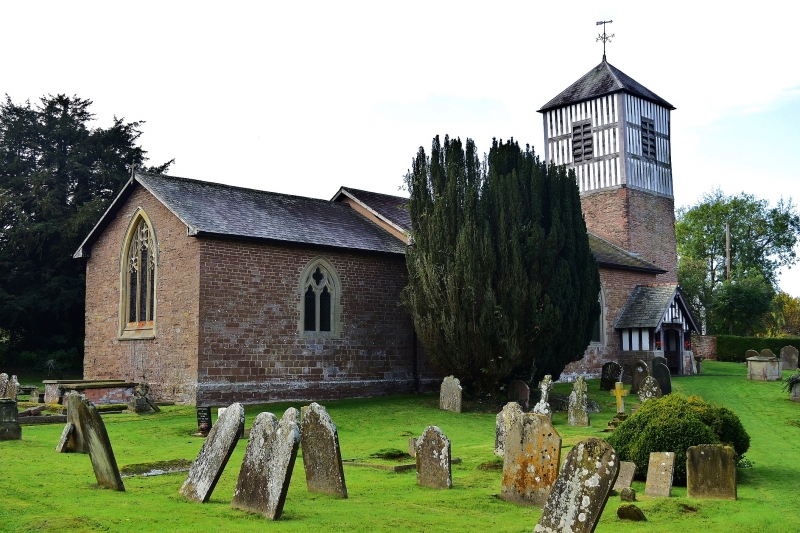 Find accommodation in
Middleton on the Hill

Parish church. C13, partly rebuilt 1834, restored 1884, 1904-5 and extended
1908. Coursed rubble with ashlar dressings and slate roof. C13 west tower
(raised C16), nave and chancel of 1834, north porch and vestry of 1908.
West tower: three stages, the belfry is close-studded timber-framing, probably
C16, with louvred openings of two lights on each side. First stage has a
small semi-circular headed window on north and south walls. Ground stage has
a C19 window with a two-centred head which cuts through a small semi-circular
headed window. In north wall a blocked door with semi-elliptical head.
Nave of three bays, in north wall two windows each of two trefoiled lights
under a two-centred head with label. The porch at the west end of 1908 is
timber-framed on a stone plinth with rendered infill. Chancel of one bay
with a window of two trefoiled lights with a quatrefoil in head under two-
centred arch with label. East window of three trefoiled lights, tracery in
head under two-centred arch. Gable north vestry of 1908. Interior: two-
centred tower arch of one chamfered order with moulded label. Chancel arch
semi-elliptical and plastered. Ceilings are plastered segmental vaults.
Fittings: C19 pulpit with three panelled sides, the panels with pierced ogee
cinquefoiled heads. Lectern of wrought iron and brass in Arts and Crafts
style. Font, C13 with quatrefoil bowl on C19 quatrefoil stem and moulded
base. Wall tablet to John Rose Hall, died 1858, on north wall of chancel,
surmounted by an urn, and signed "T Gaffyn". On south wall tablet to
Edward Pritchett, died 1834. (RCHM, III, p 25; BoE, p 86).