A Grade I Listed Building in Byford, County of Herefordshire 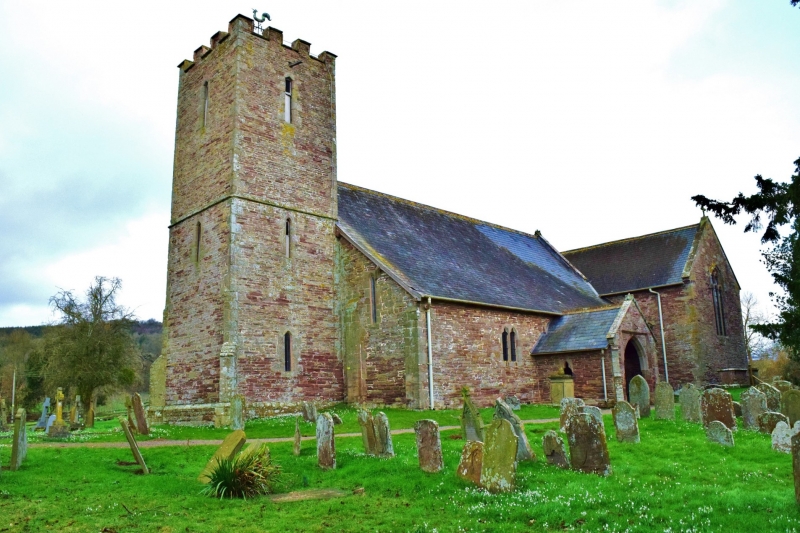 West tower has diagonal buttresses and a battlemented
parapet. Three stages with a string course to the upper stage. Each stage
has a triangular headed lancet with chamfered reveals in each wall. South
-aisle of three bays, with a window of two trefoiled lights to west and that
to east of three ogee trefoil lights, both with square heads. The C13 south
door is set in a slight projection and has a two-centred arch of two orders,
the outer moulded, with a moulded label. The outer order of the jambs has
engaged shafts with foliated capitals and chamfered bases. The porch is C14
of stone with a two-centred arch. The side walls each have a single-light
window. The nave north wall has five windows, which from west to east are:
a window of two trefoiled lights with a quatrefoil under a two-centred head,
a C12 semi-circular headed window, a 2-light window, a lancet and another 2-
light window similar to the first. The south transept south window is C14
of three trefoiled lights under tracery with a two-centred head and a label.
The east window is of five trefoiled lights under a square head. The chancel
has one window in the south wall of two trefoiled lights with a similar one
opposite in the north wall. The east window is of three lights, the outer
two pointed, the central one triangular headed, all under a two-centred head.

INTERIOR: tower entrance has a segmental pointed rere-arch, with a two-
centred arch on the outer face of two orders with respond shafts to the outer
order of the jambs with foliate capitals. Arcade to south transept of five
bays, the arches are two-centred and of two chamfered orders on cylindrical
piers. The two eastern piers (late C12) have moulded bases and scalloped
capitals, the other two have moulded bases and capitals. The responds each
have a corbel shaft with a scalloped capitals. Arch from south aisle to
south transept of two chamfered orders which both die into the responds.
The chancel arch, rebuilt 1882-3, is two-centred of two continuous chamfered
orders. Arcade from chancel to south transept of two bays with two-centred
arches of two orders, the inner order chamfered, outer moulded. The central
pier is of eight grouped shafts, alternately round and filleted, with "stiff-
leaf" capitals. Roof of nave is of the common-rafter type with arch braces
to collars and brattished wall-plate. Four later trusses inserted with wall
posts resting on corbels. South aisle roof probably C14 of five bays with wall
posts and cusped bracing. Transept roof is common rafters with arch braces to
collars and a collar purlin. Chancel roof is a C19 segmental pointed ribbed
wooden vault. Fittings: the octagonal font is dated 1638. The rector's desk
in the north-west corner of the chancel incorporates C17 panelling dated 1635.
Reredos composed of C17 panelling. Extensive traces of C14 wall painting
in south transept, including an elaborate canopy above a corbel which would
have carried a statue. Two figures of saints, one probably Saint Margaret.
On west wall of south transept, a Gothick memorial tablet to St John Cotterell,
died 1790. Two similar Gothick memorial tablets in south aisle to John Henry
Cotterell, died 1834, and Sir John Geeres Cotterell, died 1845. The windows
of the south aisle have re-used coffin lids with incised crosses showing.