A Grade II Listed Building in Elton, County of Herefordshire 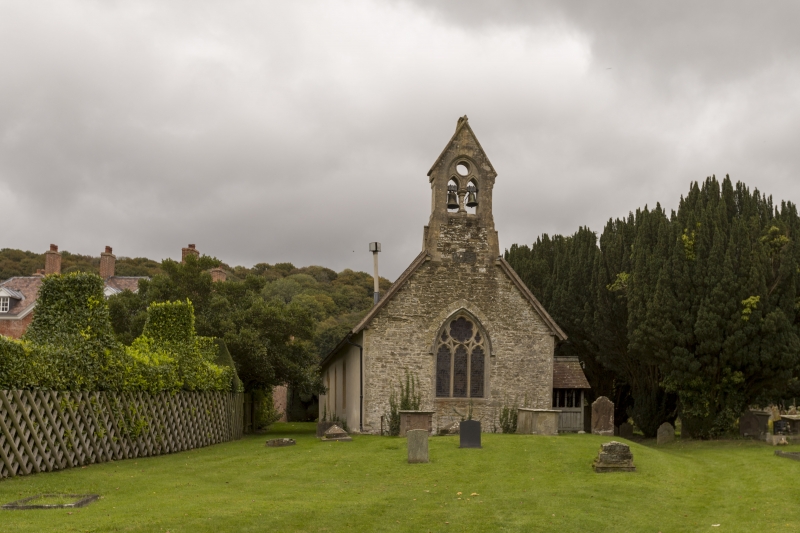 Parish church. C12 with C13 alterations; restored in 1876 by W E Martin.
Sandstone rubble, rendered at ends, with ashlar dressings and plain tiled
roof. Continuous three-bay nave and two-bay chancel with south porch and
west bellcote. Nave and chancel: west edd wall was rebuilt above eaves
level in C19 and has a 3-light C19 window. North and south elevations of
nave have a pair of C19 lancets and also a single C19 lancet. The chancel
has three C19 stepped cusped lancets at its east end situated beneath a
hoodmould with block stops. In the north elevation is a pair of C19 lancets
and, at the eastern end, a C12 round-headed light (not in situ). The south
elevation has a C13 lancet at its eastern end, a C19 lancet and, between
the two windows a C12 doorway with plain jambs and a round-arched head.
The south porch is C19, gabled and timber-framed on a rubble base. At the
gable end is a tie-beam truss with decorative convex braces. The lower part
of the side elevations is boarded and above is a row of five turned balusters.
The south doorway within is C12, has plain jambs and a round arch with
chamfered imposts. West bellcote is C19. It is gabled with a moulded ridge,
a finial base (finial is missing) and moulded eaves. There is a single blind
pointed archway pierced with a 2-light opening and, above, a circular opening.
The two pointed lights are separated by a moulded column and a single bell
hangs within each light. Interior: there is no chancel arch. There is an
ashlared collar rafter-roof in the nave of the chancel, the chancel having
two subsidiary arch-braced collar trusses. Cl7 altar table with turned legs
and moulded top rails with shaped brackets. C19 cusped pointed aumbry with
hoodmould and foliated stops on foliated corbel. Two late Cl7 panelled chairs
with lozenge enrichment. Rood screen incorporates some C15 and C17 woodwork.
The font is probably C12 and has a plain cylindrical bowl and modern stem and
base. The five-sided pulpit is early Cl7 and panelled with upper strapwork
ornament and enriched arches beneath. There is re-used Cl7 panelling on the
north and south walls On the north wall are the Royal Arms of Queen
Elizabeth I carved in wood and with the inscription "God save the Queene".
Cl7 parish chest. Memorials: in the chancel are two stone shields with
remains of a painted inscription to Katherine ? and also two C19 memorials.
(RCHM, Herefs, Vol III, p 56-7; BoE, p 127).