A Grade I Listed Building in Levens, Cumbria 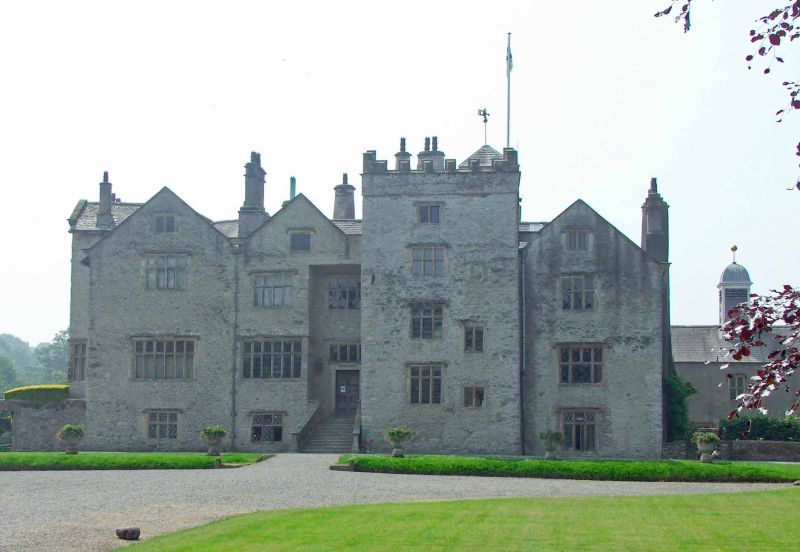 House and attached service wings forming courtyard to rear. Mainly C16 for the
Bellingham family with earlier (probably C14) core. Extensively remodelled in
late C17 for Colonel James Graham (his initials and dates in 1690s on lead
rainwater heads) some later alterations and additions for Mary Andover (her
initials and dates in the 1780s on rainwater heads); early C19 tower added to
rear, attributed to Webster of Kendal. Limestone rubble walls, part rendered,
with sandstone dressings; graduated greenslate roof with stone and lead ridges,
stone copings and kneelers and massive chimneys, earlier ones with tapered
cylindrical stacks. 2 storeys plus basements and attics. Hall has cross-wings
and later additions to North and South. 4 bays: irregular: 3rd from left
battlemented tower, rest gabled. Stone mullioned-and-transomed windows, mostly
under hoodmoulds, decorative leaded glazing of various dates and styles.
Recessed central door in eared surround approached by flight of stone steps. 3
lead rainwater pipes: central and left with decorative straps and heads with
initials and dates IGD 1692 and 1691 respectively, right with initials and date
MA 1796. Return elevation to East has full height canted bay window to right
and square gabled bay to left. The lead rainwater pipes to all sides are of
various dates and include a number with gilded rainwater heads decorated with
crowns and initials MA and dates 1787 and 1788 on service wing, and one with
initials and date I & DG 1700 to courtyard. Service wing surmounted by square
domed clock-tower dated 1788 with gilded ball finial. Interior has a wealth of
C16 and later plasterwork and panelling, for details see R.C.H.M. pp 151-155.
The gardens, which were laid out in the late C17 by Monsieur Beamont for Col.
Graham are of National Importance and form a vital setting for the house.