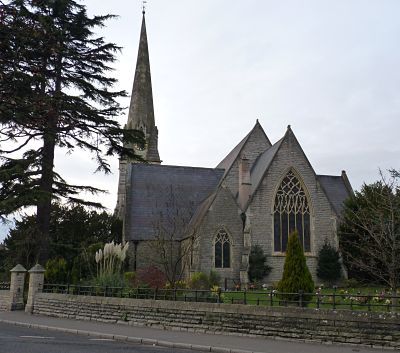 EXTERIOR: The church is in Decorated style. The 3-stage tower has diagonal buttresses, with gable offsets. The south doorway, opening into a porch, has ballflower decoration in the arch. The 2nd stage has a 2-light west window, and 2 narrow cusped lancets in south and east faces. Triple belfry windows have transoms and cusped tracery lights, below a tall broach stone spire with lucarnes, partly obscured by clock faces. The south aisle has 2-light windows. There is only a modest west front. The nave has a west doorway with 2 orders of nook shafts with foliage capitals, and 4-light west window. Angle buttresses have gabled caps. The clerestorey has 2-light windows. Transepts have 4-light south and north windows, and the north transept also has a 2-light east window. The chancel has diagonal buttresses, 5-light east window and two 2-light north windows. The organ chamber has a trefoil-headed doorway, 2-light south and east windows, and modern brick stack set back from the east wall. On the north side is a double-gabled vestry, with low addition to the north-west.

INTERIOR: Nave arcades have round piers of polished Westmorland granite, octagonal foliage capitals and double-chamfered arches. The nave has a 6-bay arched-brace roof and subsidiary closely spaced scissor rafters. Transepts have trussed rafter roofs. The Decorated chancel arch has an inner order on corbelled shafts with stiff-leaf capitals. In the chancel is a canted boarded ceiling painted blue, with gilded moulded ribs. A corbelled piscina is on the north side, and on the south side are 2 sedilia under ogee heads with central serpentine polished marble shaft. Walls are plastered. The floor is laid with boards, except for tiles in the porch below the tower, and at the east end of the nave.

PRINCIPAL FIXTURES: Two important monuments in the south transept and other fixtures were brought from the old church. A Renaissance wall monument to Thomas Watson (d 1561) is framed by Ionic columns, foliage entablature, and pediment with skull. A large Baroque monument to John Deacle (d 1709) is attributed to Francis Bird. The deceased is shown as a full-length reclining figure on a sarcophagus, below an inscription on a drapery panel framed by pilasters, broken pediment and achievement. Other wall monuments are to Mrs Frances Watson (d 1727) and William Acton (d 1817). The font has a round bowl on an octagonal stem and base, is probably C14 or C15 and was brought here from the old church in 1917. Two pointed boards with Commandments, Lord¿s Prayer and Creed are fixed to the east wall. Other fixtures are 1872 or later. The polygonal pulpit of Caen stone is on a pedestal with detached marble shafts, and has heads of Christ and SS Peter and John. Choir stalls of 1926 by Sprague & Evans have Gothic blind-tracery ends. A rood beam was erected in 1934, with rood figures by Alec Miller of Chipping Campden. The stone reredos has cusped arches with relief foliage and angels over the spandrels. There are many stained glass windows, 4 of 1872 by W.H. Constable of Cambridge, including the east window. Other windows include, in the chancel, Adoration of the Magi by Wippell & Co (1921), and Presentation in the south aisle, by Curtis, Ward and Hughes (1903). Three aisle windows are by Albert Lemmon (1889-1963) of the Bromsgrove Guild, showing Joseph (1937), legend of the founding of Evesham (1954) and Good Shepherd and Good Samaritan.

SUBSIDIARY FEATURES: In the churchyard is an octagonal Perpendicular font bowl with quatrefoils. On the south and east sides facing Port Street is a stone wall and gate piers, with iron railings and gates.

HISTORY: The church was built 1871-72 by T.H. Barry (1815-1905), architect of Liverpool, at a cost of £4500. It replaced an earlier church on a different site that was considered beyond repair, but many fixtures were moved from the old church to the new. Glass for the new church was supplied by W.H. Constable of Cambridge, and coloured glass in the transept windows by Thomas Holt of Liverpool. The north-west vestry was added in 1912-13 by C.E. Bateman and G.H. Hunt, extended 1991-92 by Patrick J. Burton, architect of Evesham.

REASONS FOR DESIGNATION: The church of St Peter, Bengeworth, is listed at Grade II for the following principal reasons:
* It is a well-designed and well-preserved Gothic-revival church with prominent asymmetrical tower and spire.
* It has interior features of special interest, especially C16 and C18 wall monuments.