A Grade I Listed Building in Hanbury, Worcestershire 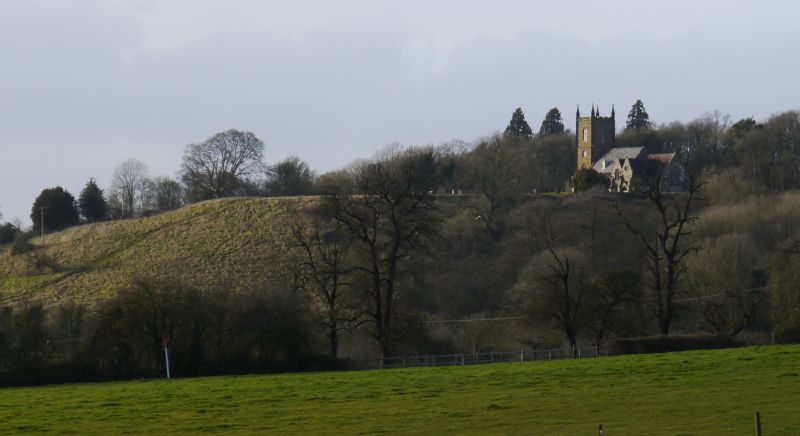 West tower: rebuilt 1793;
three stages, three strings and chamfered plinth; diagonal corner buttresses
and pointed-arched cusped panels. Lowest stage serves as porch, west entrance
having a heavily moulded ogee-arched and tall finialed surround; large oculus
in side elevation and north pointed doorway. Second stage has pointed Y-traceried
windows with sill string and oculus above. The belfry stage has similar windows
with louvred openings and above is a panelled frieze and embattled parapet with
crocketted corner pinnacles, restored mid-C20. Nave: C13; north aisle C14 and
both aisles rebuilt late C18; four bays; north aisle has separate roof, diagonal
corner buttresses and four large raking buttresses; two windows with pointed
arches incorporating some C14 stonework and with no tracery (the easternmost
is blocked) and two square-headed windows; the west end elevation has a blocked
pointed doorway. The south aisle has a single pitch roof, diagonal corner
buttresses and also buttresses at bay divisions; blocked doorway and window to
west and pointed window without tracery in second bay from east; west end
elevation has a pointed window reconstructed from C13 masonry with a hood mould.
Above, in the nave roof, are two flat-roofed dormers. Chancel: c1860 by Street;
three bays with buttresses at gable ends; 3-light east window has hood mould with
foliated stops and continuous sill string; pointed windows without tracery at
north-east and south-east end; north transept gable end has four cusped lancets
beneath a rose window; the vestry projects from its east side elevation and
has three cusped lancets and a door facing north and a rose window in its east
gable end; the south transept has a parallel east wing and together they house
the Vernon chapel; the transept gable end has a central pointed doorway with
nookshafts and an outer dog-tooth and an inner rosette moulding; above is a
3-light window with hoodmould and foliated stops; the adjacent gable end has
a gabled monument at its base to Thomas Bowater Vernon, died 1859; above is a
rose window with a hoodmould returning to form a string; the east side
elevation has a dog-tooth eaves moulding and a 3-light window.

INTERIOR: four-bay,
pointed-arched arcade of two chamfered orders; south arcade is c1210 and has
circular columns, one still having a trumpet-scalloped capital; north arcade
has octagonal columns and re-used C14 capitals. Pointed tower arch of three
chamfered orders is blocked and flanked by semicircular headed niches. Chancel
arch is pointed, has dog-tooth moulding and is supported on short columns with
foliated capitals; Street has used similar detailing throughout the chancel.
Wagon roofs throughout, plastered in nave and aisles and ornately painted in
the chancel and transepts. Chancel has piscina, sedilia and aumbry, the
continuous east window sill string forming a hood above them. Other fittings
include a Last Supper reredos and cast-iron altar rails and parcloses. The
Vernon Chapel has a C17 oak altar table from St Helen's, Worcester, and in
the north transept is an elaborately painted organ case. The nave has a C19
font, late C18 box pews now reduced in height, an elegant late C18 west gallery
and some C17 panelling. In the north aisle are the original artist's models of
the Nativity and Resurrection panels for the reredos of Liverpool Cathedral
and in the south aisle is an early C16 relief and, the parish chest. In the
tower is a late C18 bread dole cupboard and more C17 panelling.

The church has
undergone several major rebuildings, including Street's elaborate east end; it
contains some interesting sculpture, including several large monuments, and
some late C18 fittings.