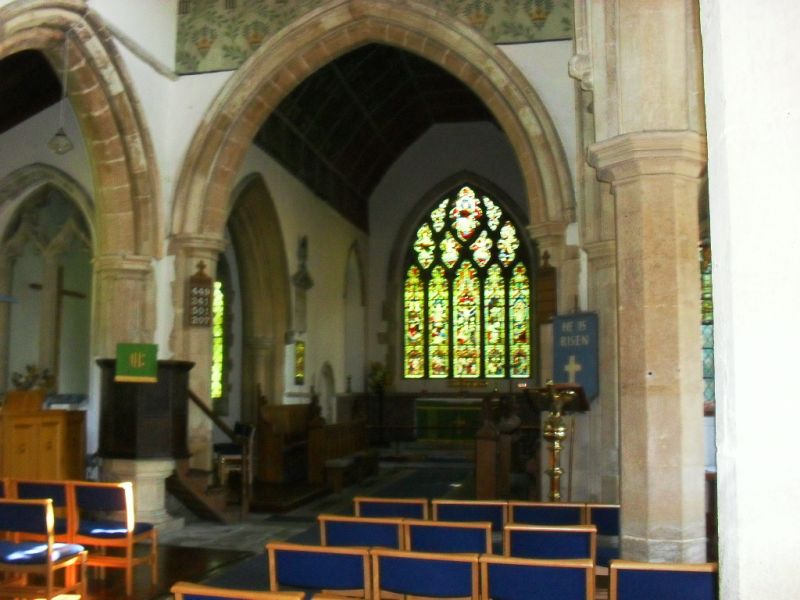 Church, mediaeval, restored 1866 and 1901. Nave, chancel, west tower, north and
south aisles and south porch, organ chamber and boiler-house. Flint rubble
with limestone dressings and parapet gables. Plaintiled roofs to nave, chancel
and organ chamber; tower roof flat with crenellated parapets; south aisle roof
slated; porch and north aisle roofs leaded. The church was largely rebuilt mid
C14; the tower is a little earlier, and the chancel has a core of mid C13; the
porch was added C15. Mid C13 north doorway from chancel hoodmoulded, the
moulding continues as a dado. Of c.1300 is the double piscina, with hood-mould
above cusped arches. In the south chancel wall is an early C14 window with
low-side windows below a transome. Early C14 unbuttressed tower with 2-light
belfry windows, lion-head gargoyles and plain west doorway. Nave rebuilt mid
C14, with 4-bay arcades of octagonal columns and similar chancel arch. North
and south doorways and 2-light traceried aisle windows all have hoodmoulds
inside and out, some with mask-corbels. Many windows have areas of good
original glass containing figures and tabernacle-work. The oak battened and
boarded south door is of C14 or C15. In the chancel are mid-C14 windows; of 5
lights with net-tracery in east wall, of 2 lights in north and south walls. In
the south wall is a moulded C14 priest's doorway. South porch added C15, with
moulded arched doorway and 2-light side-windows; restored and reroofed 1901.
The clerestory, and nave and chancel roofs were rebuilt 1866; the nave roof is
of arch-braced collar-beam type and the chancel is ceiled in 7 cants and
painted. The organ chamber and boiler house added to north side 1866.
Octagonal font with C14 octagonal traceried bowl, the stem probably renewed
C19. C17 octagonal pulpit. In the nave are 2 reused C15 poppyhead benchends.
On the chancel walls are 2 painted consecration crosses. In the chancel are
several late C19 stained glass windows by Clayton and Bell and others. A dado
of Salviati mosaic lines the sanctuary walls. In the chancel are wall-tablets
to William Glascock (d.1718) and Thomas Thoresby (d.1790) and his wife Isabella
(d.1794). A marble floor slab to Revd. Thomas Mallaber (d.1732) and his wife
Margaret (d.1719). In the tower is a painted wall-tablet in memory of Revd.
James David (will 1691).